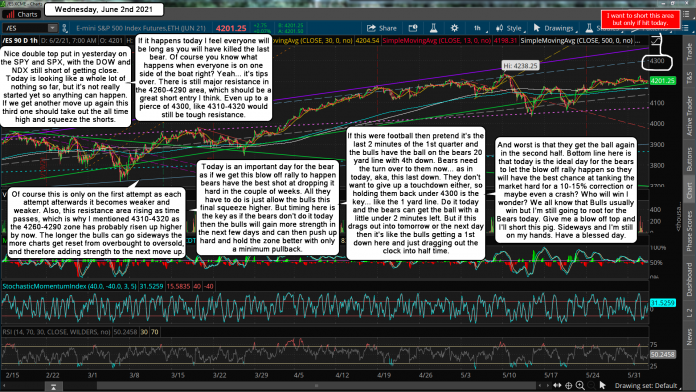 Nice double top put in yesterday on the SPY and SPX, with the DOW and NDX still short of getting close. Today is looking like a whole lot of nothing so far, but it's not really started yet so anything can happen. If we get another move up again this third one should take out the all time high and squeeze the shorts.

If it happens today I feel everyone will be long as you will have killed the last bear. Of course you know what happens when everyone is on one side of the boat right? Yeah... it's tips over. There is still major resistance in the 4260-4290 area, which should be a great short entry I think. Even up to a pierce of 4300, like 4310-4320 would still be tough resistance.

Of course this is only on the first attempt as each attempt afterwards it becomes weaker and weaker. Also, this resistance area rising as time passes, which is why I mentioned 4310-4320 as the 4260-4290 zone has probably risen up higher by now. The longer the bulls can go sideways the more charts get reset from overbought to oversold, and therefore adding strength to the next move up.

Today is an important day for the bear as if we get this blow off rally to happen bears have the best shot at dropping it hard in the couple of weeks. All they have to do is just allow the bulls this final squeeze higher. But timing here is the key as if the bears don't do it today then the bulls will gain more strength in the next few days and can then push up hard and hold the zone better with only a minimum pullback.

If this were football then pretend it's the last 2 minutes of the 1st quarter and the bulls have the ball on the bears 20 yard line with 4th down. Bears need the turn over to them now... as in today, aka, this last down. They don't want to give up a touchdown either, so holding them back under 4300 is the key... like the 1 yard line. Do it today and the bears can get the ball with a little under 2 minutes left. But if this drags out into tomorrow or the next day then it's like the bulls getting a 1st down here and just dragging out the clock into half time.

And worst is that they get the ball again in the second half. Bottom line here is that today is the ideal day for the bears to let the blow off rally happen so they will have the best chance at tanking the market hard for a 10-15% correction or maybe even a crash? Who will win I wonder? We all know that Bulls usually win but I'm still going to root for the Bears today. Give me a blow off top and I'll short this pig. Sideways and I'm still on my hands. Have a blessed day.