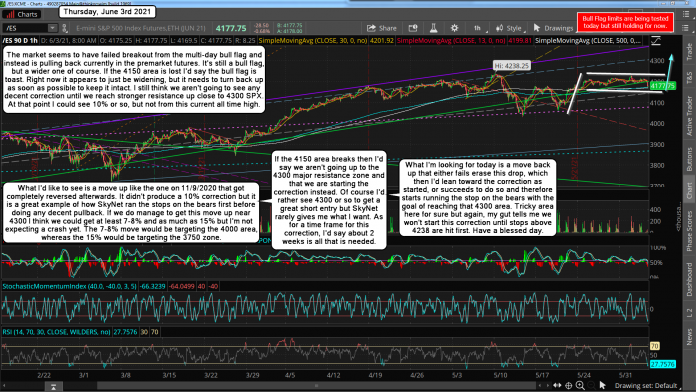 The market seems to have failed breakout from the multi-day bull flag and instead is pulling back currently in the premarket futures. It's still a bull flag, but a wider one of course. If the 4150 area is lost I'd say the bull flag is toast. Right now it appears to just be widening, but it needs to turn back up as soon as possible to keep it intact. I still think we aren't going to see any decent correction until we reach stronger resistance up close to 4300 SPX. At that point I could see 10% or so, but not from this current all time high.

What I'd like to see is a move up like the one on 11/9/2020 that got completely reversed afterwards. It didn't produce a 10% correction but it is a great example of how SkyNet ran the stops on the bears first before doing any decent pullback. If we do manage to get this move up near 4300 I think we could get at least 7-8% and as much as 15% but I'm not expecting a crash yet. The 7-8% move would be targeting the 4000 area, whereas the 15% would be targeting the 3750 zone.

If the 4150 area breaks then I'd say we aren't going up to the 4300 major resistance zone and that we are starting the correction instead. Of course I'd rather see 4300 or so to get a great short entry but SkyNet rarely gives me what I want. As for a time frame for this correction, I'd say about 2 weeks is all that is needed.

What I'm looking for today is a move back up that either fails erase this drop, which then I'd lean toward the correction as started, or succeeds to do so and therefore starts running the stop on the bears with the goal of reaching that 4300 area. Tricky area here for sure but again, my gut tells me we won't start this correction until stops above 4238 are hit first. Have a blessed day.