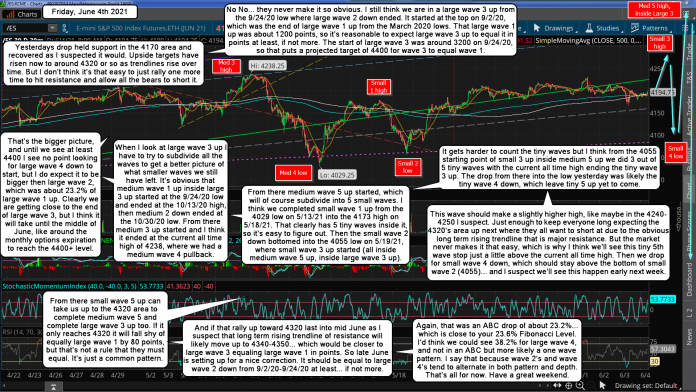 Yesterdays drop held support in the 4170 area and recovered as I suspected it would. Upside targets have risen now to around 4320 or so as trendlines rise over time. But I don't think it's that easy to just rally one more time to hit resistance and allow all the bears to short it.

That's the bigger picture, and until we see at least 4400 I see no point looking for large wave 4 down to start, but I do expect it to be bigger then large wave 2, which was about 23.2% of large wave 1 up. Clearly we are getting close to the end of large wave 3, but I think it will take until the middle of June, like around the monthly options expiration to reach the 4400+ level.

It gets harder to count the tiny waves but I think from the 4055 starting point of small 3 up inside medium 5 up we did 3 out of 5 tiny waves with the current all time high ending the tiny wave 3 up. The drop from there into the low yesterday was likely the tiny wave 4 down, which leave tiny 5 up yet to come.

This wave should make a slightly higher high, like maybe in the 4240-4250 I suspect. Just enough to keep everyone long expecting the 4320's area up next where they all want to short at due to the obvious long term rising trendline that is major resistance. But the market never makes it that easy, which is why I think we'll see this tiny 5th wave stop just a little above the current all time high. Then we drop for small wave 4 down, which should stay above the bottom of small wave 2 (4055)... and I suspect we'll see this happen early next week.

From there small wave 5 up can take us up to the 4320 area to complete medium wave 5 and complete large wave 3 up too. If it only reaches 4320 it will fall shy of equally large wave 1 by 80 points, but that's not a rule that they must equal. It's just a common pattern.

And if that rally up toward 4320 last into mid June as I suspect that long term rising trendline of resistance will likely move up to 4340-4350... which would be closer to large wave 3 equaling large wave 1 in points. So late June is setting up for a nice correction. It should be equal to large wave 2 down from 9/2/20-9/24/20 at least... if not more.

Again, that was an ABC drop of about 23.2%... which is close to your 23.6% Fibonacci Level. I'd think we could see 38.2% for large wave 4, and not in an ABC but more likely a one wave pattern. I say that because wave 2's and wave 4's tend to alternate in both pattern and depth. That's all for now. Have a great weekend.