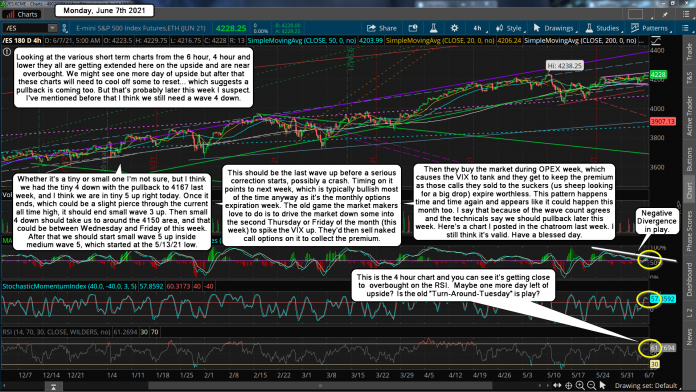 Looking at the various short term charts from the 6 hour, 4 hour and lower they all are getting extended here on the upside and are near overbought. We might see one more day of upside but after that these charts will need to cool off some to reset... which suggests a pullback is coming too. But that's probably later this week I suspect. I've mentioned before that I think we still need a wave 4 down.

Whether it's a tiny or small one I'm not sure, but I think we had the tiny 4 down with the pullback to 4167 last week, and I think we are in tiny 5 up right today. Once it ends, which could be a slight pierce through the current all time high, it should end small wave 3 up. Then small 4 down should take us to around the 4150 area, and that could be between Wednesday and Friday of this week. After that we should start small wave 5 up inside medium wave 5, which started at the 5/13/21 low.

This should be the last wave up before a serious correction starts, possibly a crash. Timing on it points to next week, which is typically bullish most of the time anyway as it's the monthly options expiration week. The old game the market makers love to do is to drive the market down some into the second Thursday or Friday of the month (this week) to spike the VIX up. They'd then sell naked call options on it to collect the premium.

Then they buy the market during OPEX week, which causes the VIX to tank and they get to keep the premium as those calls they sold to the suckers (us sheep looking for a big drop) expire worthless. This pattern happens time and time again and appears like it could happen this month too. I say that because of the wave count agrees and the technicals say we should pullback later this week. Here's a chart I posted in the chatroom last week. I still think it's valid. Have a blessed day.