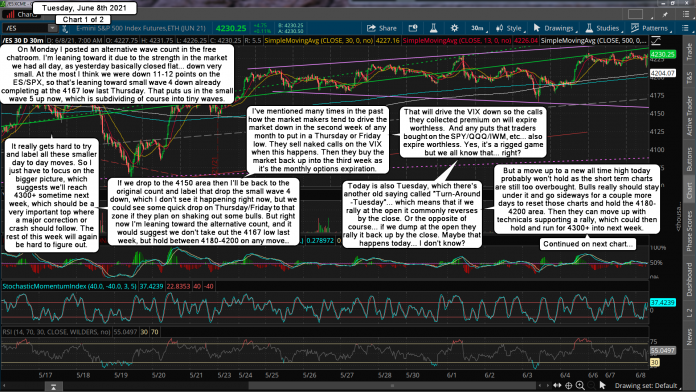 On Monday I posted an alternative wave count in the free chatroom. I'm leaning toward it due to the strength in the market we had all day, as yesterday basically closed flat... down very small. At the most I think we were down 11-12 points on the ES/SPX, so that's leaning toward small wave 4 down already completing at the 4167 low last Thursday. That puts us in the small wave 5 up now, which is subdividing of course into tiny waves.

It really gets hard to try and label all these smaller day to day moves. So I just have to focus on the bigger picture, which suggests we'll reach 4300+ sometime next week, which should be a very important top where a major correction or crash should follow. The rest of this week will again be hard to figure out.

If we drop to the 4150 area then I'll be back to the original count and label that drop the small wave 4 down, which I don't see it happening right now, but we could see some quick drop on Thursday/Friday to that zone if they plan on shaking out some bulls. But right now I'm leaning toward the alternative count, and it would suggest we don't take out the 4167 low last week, but hold between 4180-4200 on any move down this week.

I've mentioned many times in the past how the market makers tend to drive the market down in the second week of any month to put in a Thursday or Friday low. They sell naked calls on the VIX when this happens. Then they buy the market back up into the third week as it's the monthly options expiration.

That will drive the VIX down so the calls they collected premium on will expire worthless.  And any puts that traders bought on the SPY/QQQ/IWM, etc... also expire worthless. Yes, it's a rigged game but we all know that... right?

Today is also Tuesday, which there's another old saying called "Turn-Around-Tuesday"... which means that if we rally at the open it commonly reverses by the close. Or the opposite of course... if we dump at the open they rally it back up by the close. Maybe that happens today... I don't know?

But a move up to a new all time high today probably won't hold as the short term charts are still too overbought. Bulls really should stay under it and go sideways for a couple more days to reset those charts and hold the 4180-4200 area. Then they can move up with technicals supporting a rally, which could then hold and run for 4300+ into next week. 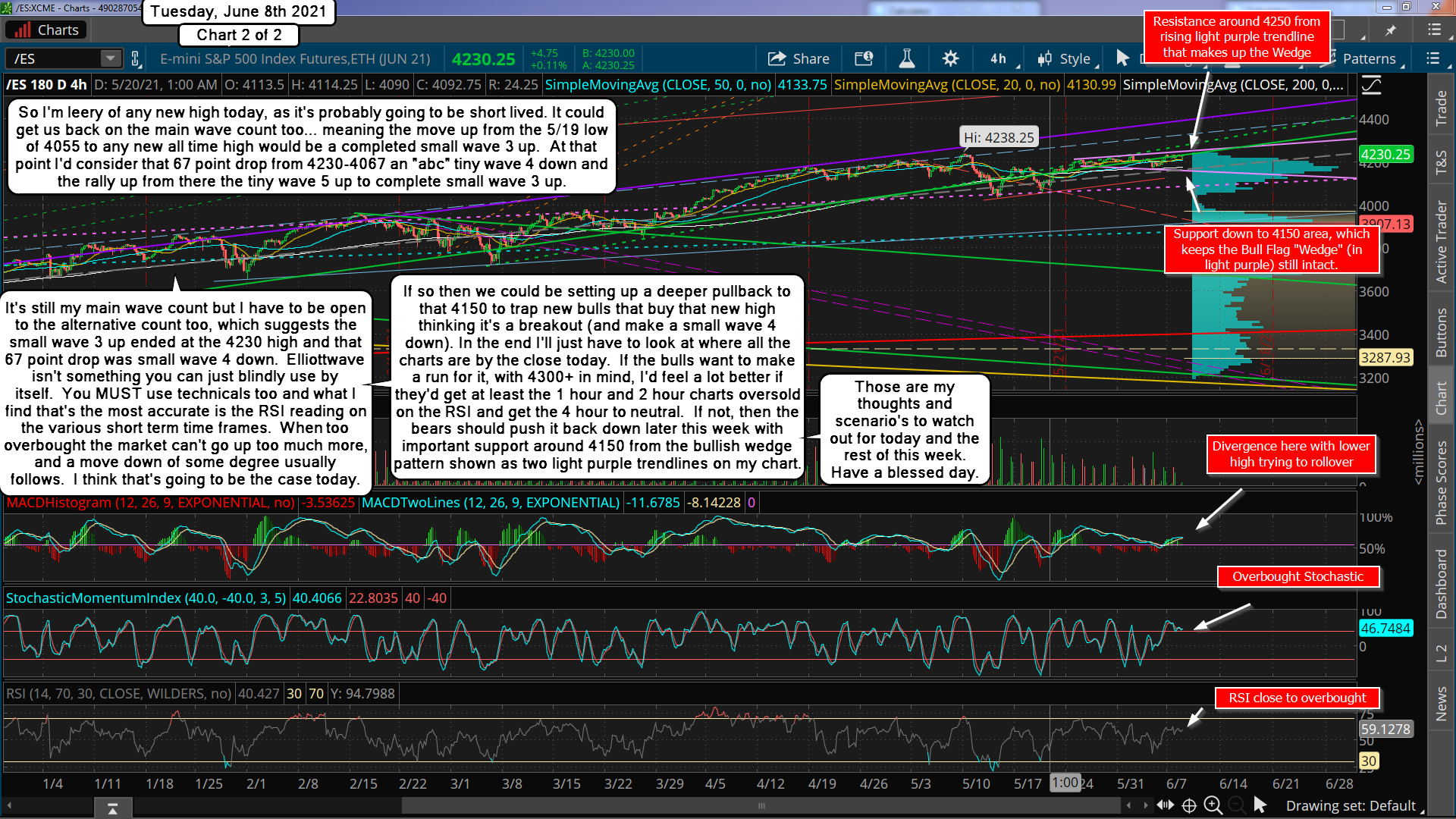 So I'm leery of any new high today, as it's probably going to be short lived. It could get us back on the main wave count too... meaning the move up from the 5/19 low of 4055 to any new all time high would be a completed small wave 3 up.  At that point I'd consider that 67 point drop from 4230-4067 an "abc" tiny wave 4 down and the rally up from there the tiny wave 5 up to complete small wave 3 up.

It's still my main wave count but I have to be open to the alternative count too, which suggests the small wave 3 up ended at the 4230 high and that 67 point drop was small wave 4 down.  Elliottwave isn't something you can just blindly use by itself.  You MUST use technicals too and what I find that's the most accurate is the RSI reading on the various short term time frames.  When too overbought the market can't go up too much more, and a move down of some degree usually follows.  I think that's going to be the case today.

If so then we could be setting up a deeper pullback to that 4150 to trap new bulls that buy that new high thinking it's a breakout (and make a small wave 4 down). In the end I'll just have to look at where all the charts are by the close today.  If the bulls want to make a run for it, with 4300+ in mind, I'd feel a lot better if they'd get at least the 1 hour and 2 hour charts oversold on the RSI and get the 4 hour to neutral.  If not, then the bears should push it back down later this week with important support around 4150 from the bullish wedge pattern shown as two light purple trendlines on my chart.

Those are my thoughts and scenario's to watch out for today and the rest of this week. Have a blessed day.