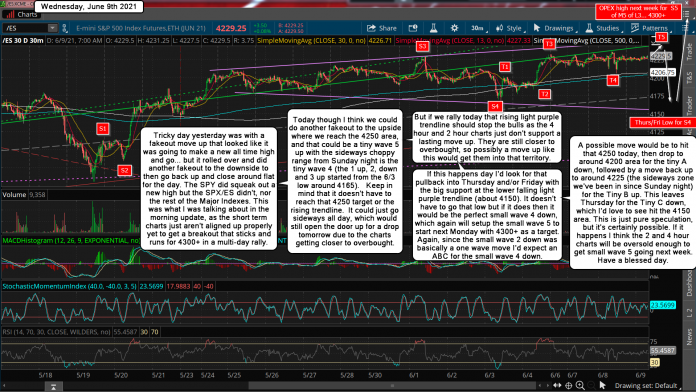 Tricky day yesterday was with a fakeout move up that looked like it was going to make a new all time high and go... but it rolled over and did another fakeout to the downside to then go back up and close around flat for the day. The SPY did squeak out a new high but the SPX/ES didn't, nor the rest of the Major Indexes. This was what I was talking about in the morning update, as the short term charts just aren't aligned up properly yet to get a breakout that sticks and runs for 4300+ in a multi-day rally.

Today though I think we could do another fakeout to the upside where we reach the 4250 area, and that could be a tiny wave 5 up with the sideways choppy range from Sunday night is the tiny wave 4 (the 1 up, 2, down and 3 up started from the 6/3 low around 4165).   Keep in mind that it doesn't have to reach that 4250 target or the rising trendline.  It could just go sideways all day, which would still open the door up for a drop tomorrow due to the charts getting closer to overbought.

But if we rally today that rising light purple trendline should stop the bulls as the 4 hour and 2 hour charts just don't support a lasting move up. They are still closer to overbought, so possibly a move up like this would get them into that territory.

If this happens day I'd look for that pullback into Thursday and/or Friday with the big support at the lower falling light purple trendline (about 4150). It doesn't have to go that low but if it does then it would be the perfect small wave 4 down, which again will setup the small wave 5 to start next Monday with 4300+ as a target. Again, since the small wave 2 down was basically a one wave move I'd expect an ABC for the small wave 4 down.

A possible move would be to hit that 4250 today, then drop to around 4200 area for the tiny A down, followed by a move back up to around 4225 (the sideways zone we've been in since Sunday night) for the Tiny B up. This leaves Thursday for the Tiny C down, which I'd love to see hit the 4150 area. This is just pure speculation, but it's certainly possible. If it happens I think the 2 and 4 hour charts will be oversold enough to get small wave 5 going next week. Have a blessed day.

NOTE: Video opens in a new tab or window, as I couldn't embed it here. 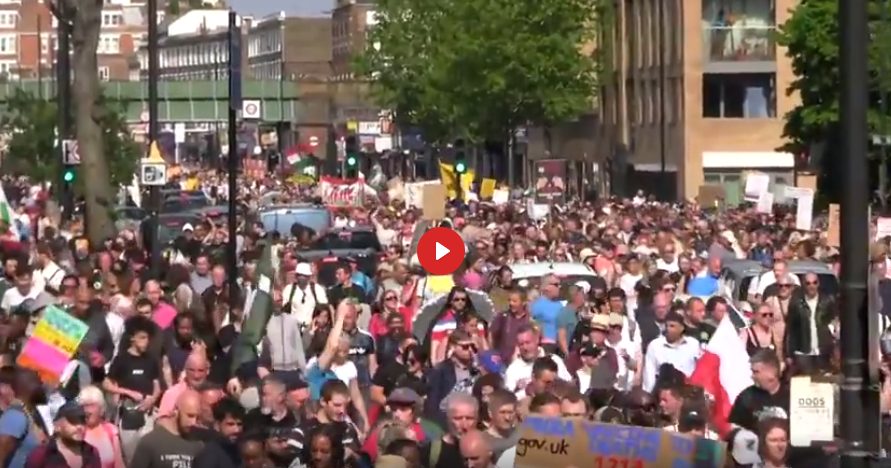 So why don't we see video's like this here in America? Because the Fake News has some other agenda to push of course. They don't want you to see these protests. They want you to take the vaccine poison to kill you off and/or "chip you" so you can be tracked and monitored 24/7 like sheep. This SkyNews report exposes Communism News Network (CNN) and their Propaganda lies.