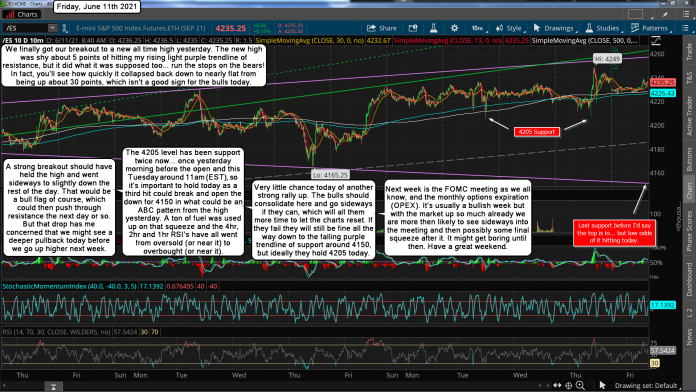 We finally got our breakout to a new all time high yesterday. The new high was shy about 5 points of hitting my rising light purple trendline of resistance, but it did what it was supposed too... run the stops on the bears! In fact, you'll see how quickly it collapsed back down to nearly flat from being up about 30 points, which isn't a good sign for the bulls today.

A strong breakout should have held the high and went sideways to slightly down the rest of the day. That would be a bull flag of course, which could then push through resistance the next day or so. But that drop has me concerned that we might see a deeper pullback today before we go up higher next week.

The 4205 level has been support twice now... once yesterday morning before the open and this Tuesday around 11am (EST), so it's important to hold today as a third hit could break and open the down for 4150 in what could be an ABC pattern from the high yesterday. A ton of fuel was used up on that squeeze and the 4hr, 2hr and 1hr RSI's have all went from oversold (or near it) to overbought (or near it).

Very little chance today of another strong rally up. The bulls should consolidate here and go sideways if they can, which will all them more time to let the charts reset. If they fail they will still be fine all the way down to the falling purple trendline of support around 4150, but ideally they hold 4205 today.

Next week is the FOMC meeting as we all know, and the monthly options expiration (OPEX). It's usually a bullish week but with the market up so much already we are more then likely to see sideways into the meeting and then possibly some final squeeze after it. It might get boring until then. Have a great weekend.