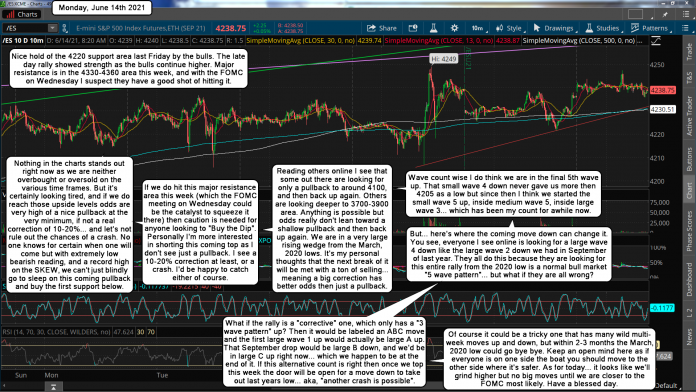 Nice hold of the 4220 support area last Friday by the bulls. The late day rally showed strength as the bulls continue higher. Major resistance is in the 4330-4360 area this week, and with the FOMC on Wednesday I suspect they have a good shot of hitting it.

Nothing in the charts stands out right now as we are neither overbought or oversold on the various time frames. But it's certainly looking tired, and if we do reach those upside levels odds are very high of a nice pullback at the very minimum, if not a real correction of 10-20%... and let's not rule out the chances of a crash. No one knows for certain when one will come but with extremely low bearish reading, and a record high on the SKEW, we can't just blindly go to sleep on this coming pullback and buy the first support below. 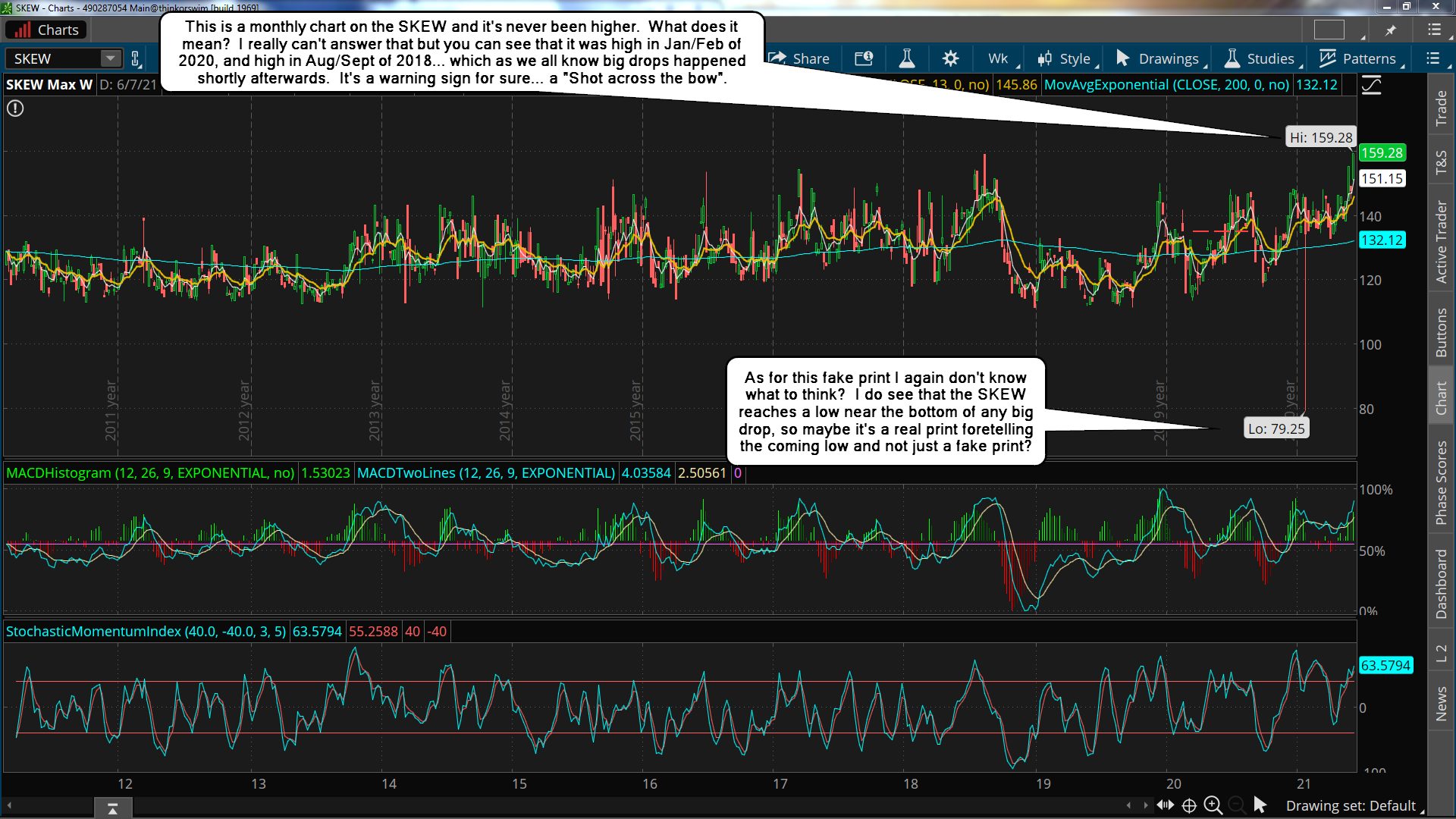 If we do hit this major resistance area this week (which the FOMC meeting on Wednesday could be the catalyst to squeeze it there) then caution is needed for anyone looking to "Buy the Dip". Personally I'm more interested in shorting this coming top as I don't see just a pullback. I see a 10-20% correction at least, or a crash. I'd be happy to catch either of course.

Reading others online I see that some out there are looking for only a pullback to around 4100, and then back up again. Others are looking deeper to 3700-3900 area. Anything is possible but odds really don't lean toward a shallow pullback and then back up again. We are in a very large rising wedge from the March, 2020 lows. It's my personal thoughts that the next break of it will be met with a ton of selling... meaning a big correction has better odds then just a pullback.

Wave count wise I do think we are in the final 5th wave up. That small wave 4 down never gave us more then 4205 as a low but since then I think we started the small wave 5 up, inside medium wave 5, inside large wave 3... which has been my count for awhile now.

But... here's where the coming move down can change it. You see, everyone I see online is looking for a large wave 4 down like the large wave 2 down we had in September of last year. They all do this because they are looking for this entire rally from the 2020 low is a normal bull market "5 wave pattern"... but what if they are all wrong?

What if the rally is a "corrective" one, which only has a "3 wave pattern" up? Then it would be labeled an ABC move and the first large wave 1 up would actually be large A up. That September drop would be large B down, and we'd be in large C up right now... which we happen to be at the end of it. If this alternative count is right then once we top this week the door will be open for a move down to take out last years low... aka, "another crash is possible".

Of course it could be a tricky one that has many wild multi-week moves up and down, but within 2-3 months the March, 2020 low could go bye bye. Keep an open mind here as if everyone is on one side the boat you should move to the other side where it's safer. As for today... it looks like we'll grind higher but no big moves until we are closer to the FOMC most likely. Have a blessed day.