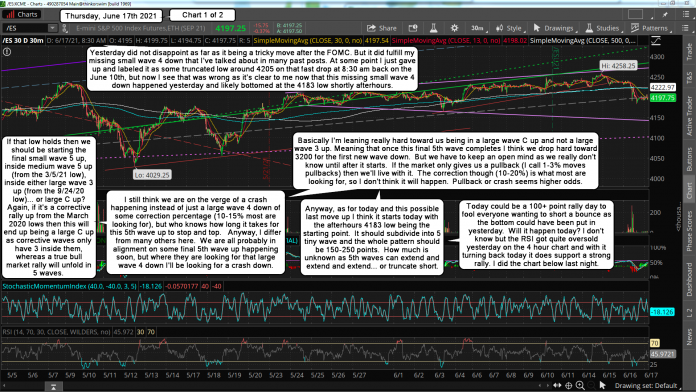 Yesterday did not disappoint as far as it being a tricky move after the FOMC. But it did fulfill my missing small wave 4 down that I've talked about in many past posts. At some point I just gave up and labeled it as some truncated low around 4205 on that fast drop at 8:30 am back on the June 10th, but now I see that was wrong as it's clear to me now that this missing small wave 4 down happened yesterday and likely bottomed at the 4183 low shortly afterhours.

If that low holds then we should be starting the final small wave 5 up, inside medium wave 5 up (from the 3/5/21 low), inside either large wave 3 up (from the 9/24/20 low)... or large C up? Again, if it's a corrective rally up from the March 2020 lows then this will end up being a large C up as corrective waves only have 3 inside them, whereas a true bull market rally will unfold in 5 waves.

Basically I'm leaning really hard toward us being in a large wave C up and not a large wave 3 up. Meaning that once this final 5th wave completes I think we drop hard toward 3200 for the first new wave down.  But we have to keep an open mind as we really don't know until after it starts.  If the market only gives us a pullback (I call 1-3% moves pullbacks) then we'll live with it.  The correction though (10-20%) is what most are looking for, so I don't think it will happen.  Pullback or crash seems higher odds.

Anyway, as for today and this possible last move up I think it starts today with the afterhours 4183 low being the starting point.  It should subdivide into 5 tiny wave and the whole pattern should be 150-250 points.  How much is unknown as 5th waves can extend and extend and extend... or truncate short.

Today could be a 100+ point rally day to fool everyone wanting to short a bounce as the bottom could have been put in yesterday.  Will it happen today? I don't know but the RSI got quite oversold yesterday on the 4 hour chart and with it turning back today it does support a strong rally. I did the chart below last night. 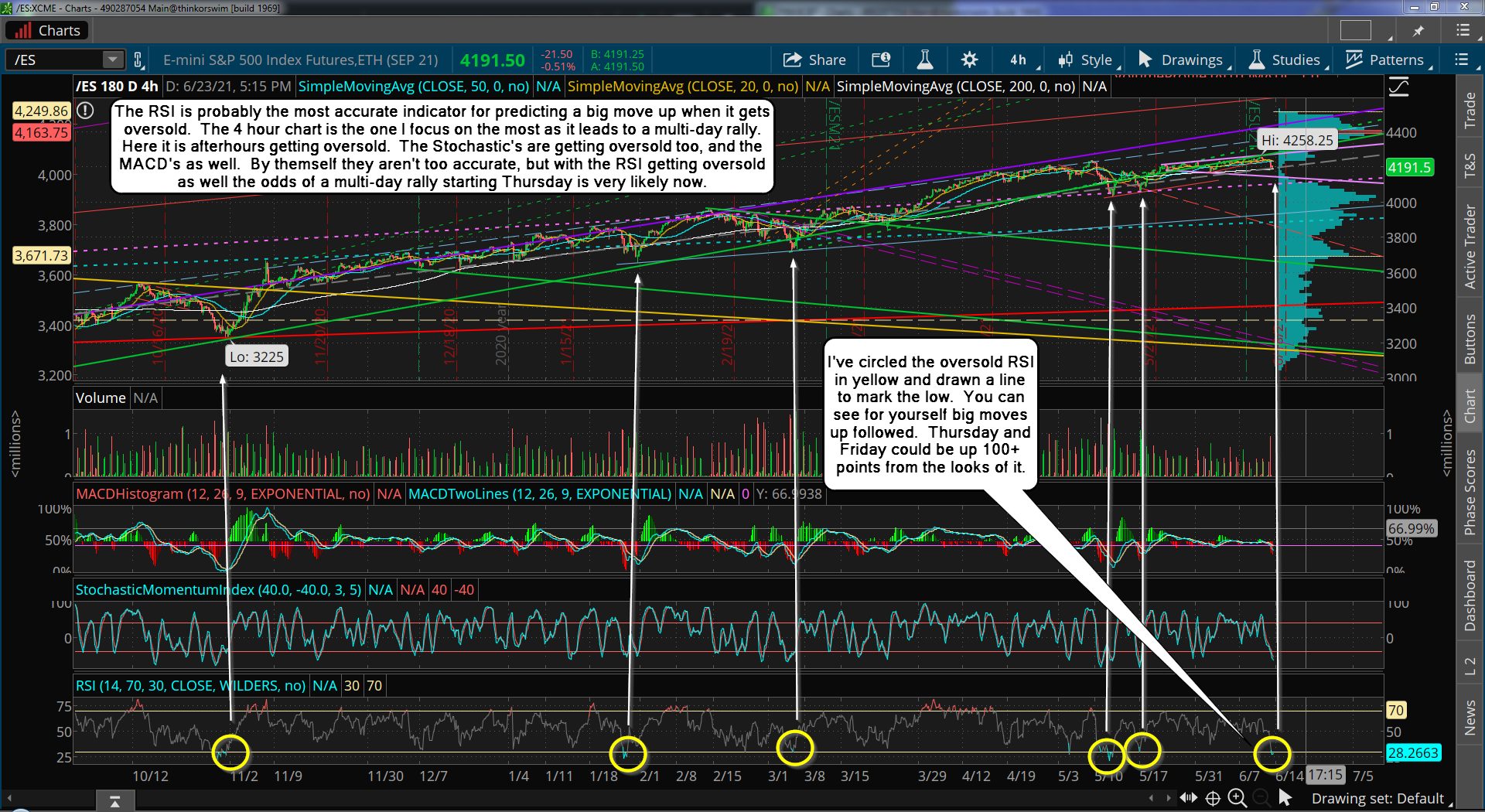 This morning it has hooked back up, so we'll see I guess if it holds.  If it doesn't and the afterhours low gets taken out today then it's likely we are in a bigger degree wave 4? down, which then will have me questioning the current wave structure.  It could lead to a longer lasting and higher wave 5 up then expected.  There's still major resistance in the 4330-4360 area, which I was thinking would end this small wave 5 up (that again, I think is starting today from that 4183 low). 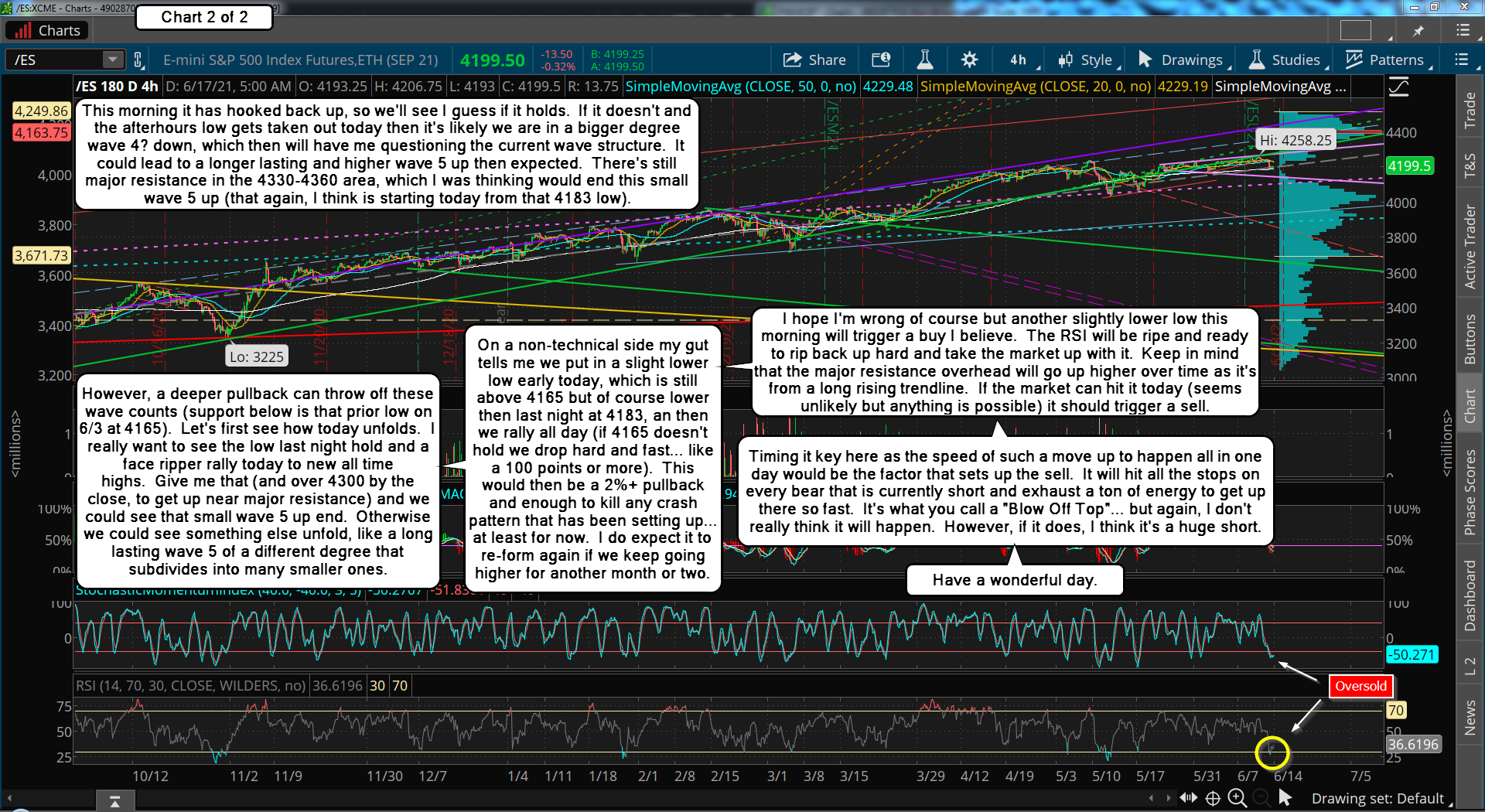 However, a deeper pullback can throw off these wave counts (support below is that prior low on 6/3 at 4165).  Let's first see how today unfolds.  I really want to see the low last night hold and a face ripper rally today to new all time highs.  Give me that (and over 4300 by the close, to get up near major resistance) and we could see that small wave 5 up end.  Otherwise we could see something else unfold, like a long lasting wave 5 of a different degree that subdivides into many smaller ones.

On a non-technical side my gut tells me we put in a slight lower low early today, which is still above 4165 but of course lower then last night at 4183, an then we rally all day (if 4165 doesn't hold we drop hard and fast... like a 100 points or more).  This would then be a 2%+ pullback and enough to kill any crash pattern that has been setting up... at least for now.  I do expect it to re-form again if we keep going higher for another month or two.

I hope I'm wrong of course but another slightly lower low this morning will trigger a buy I believe.  The RSI will be ripe and ready to rip back up hard and take the market up with it.  Keep in mind that the major resistance overhead will go up higher over time as it's from a long rising trendline.  If the market can hit it today (seems unlikely but anything is possible) it should trigger a sell.

Timing it key here as the speed of such a move up to happen all in one day would be the factor that sets up the sell.  It will hit all the stops on every bear that is currently short and exhaust a ton of energy to get up there so fast.  It's what you call a "Blow Off Top"... but again, I don't really think it will happen.  However, if it does, I think it's a huge short.

Have a wonderful day.