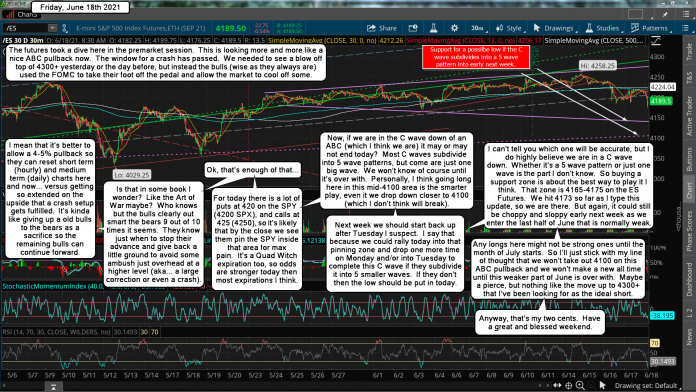 The futures took a dive here in the premarket session.  This is looking more and more like a nice ABC pullback now.  The window for a crash has passed.  We needed to see a blow off top of 4300+ yesterday or the day before, but instead the bulls (wise as they always are) used the FOMC to take their foot off the pedal and allow the market to cool off some.

I mean that it's better to allow a 4-5% pullback so they can reset short term (hourly) and medium term (daily) charts here and now... versus getting so extended on the upside that a crash setup gets fulfilled.  It's kinda like giving up a old bulls to the bears as a sacrifice so the remaining bulls can continue forward.

Is that in some book I wonder?  Like the Art of War maybe?  Who knows but the bulls clearly out smart the bears 9 out of 10 times it seems.  They know just when to stop their advance and give back a little ground to avoid some ambush just overhead at a higher level (aka... a large correction or even a crash).

For today there is a lot of puts at 420 on the SPY (4200 SPX), and calls at 425 (4250), so it's likely that by the close we see them pin the SPY inside that area for max pain.  It's a Quad Witch expiration too, so odds are stronger today then most expirations I think.

Now, if we are in the C wave down of an ABC (which I think we are) it may or may not end today?  Most C waves subdivide into 5 wave patterns, but come are just one big wave.  We won't know of course until it's over with.  Personally, I think going long here in this mid-4100 area is the smarter play, even it we drop down closer to 4100 (which I don't think will break).

Next week we should start back up after Tuesday I suspect.  I say that because we could rally today into that pinning zone and drop one more time on Monday and/or into Tuesday to complete this C wave if they subdivide it into 5 smaller waves.  If they don't then the low should be put in today.

I can't tell you which one will be accurate, but I do highly believe we are in a C wave down.  Whether it's a 5 wave pattern or just one wave is the part I don't know.  So buying a support zone is about the best way to play it I think.  That zone is 4165-4175 on the ES Futures.  We hit 4173 so far as I type this update, so we are there.  But again, it could still be choppy and sloppy early next week as we enter the last half of June that is normally weak.

Any longs here might not be strong ones until the month of July starts.  So I'll just stick with my line of thought that we won't take out 4100 on this ABC pullback and we won't make a new all time until this weaker part of June is over with.  Maybe a pierce, but nothing like the move up to 4300+ that I've been looking for as the ideal short.

Anyway, that's my two cents.  Have a great and blessed weekend.