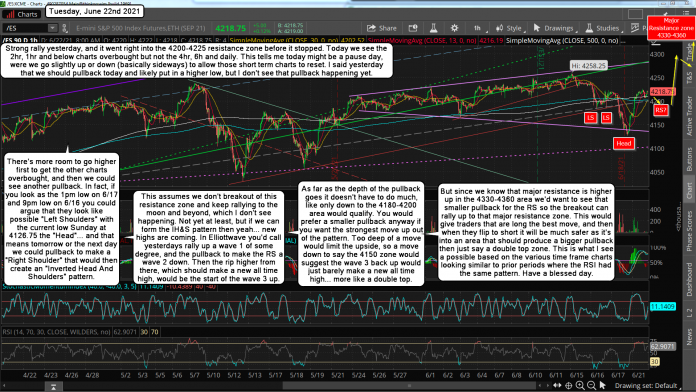 Strong rally yesterday, and it went right into the 4200-4225 resistance zone before it stopped. Today we see the 2hr, 1hr and below charts overbought but not the 4hr, 6h and daily. This tells me today might be a pause day, were we go slightly up or down (basically sideways) to allow those short term charts to reset. I said yesterday that we should pullback today and likely put in a higher low, but I don't see that pullback happening yet.

There's more room to go higher first to get the other charts overbought, and then we could see another pullback. In fact, if you look as the 1pm low on 6/17 and 9pm low on 6/16 you could argue that they look like possible "Left Shoulders" with the current low Sunday at 4126.75 the "Head"... and that means tomorrow or the next day we could pullback to make a "Right Shoulder" that would then create an "Inverted Head And Shoulders" pattern.

This assumes we don't breakout of this resistance zone and keep rallying to the moon and beyond, which I don't see happening. Not yet at least, but if we can form the IH&S pattern then yeah... new highs are coming. In Elliottwave you'd call yesterdays rally up a wave 1 of some degree, and the pullback to make the RS a wave 2 down. Then the rip higher from there, which should make a new all time high, would be the start of the wave 3 up.

As far as the depth of the pullback goes it doesn't have to do much, like only down to the 4180-4200 area would qualify. You would prefer a smaller pullback anyway if you want the strongest move up out of the pattern. Too deep of a move would limit the upside, so a move down to say the 4150 zone would suggest the wave 3 back up would just barely make a new all time high... more like a double top.

But since we know that major resistance is higher up in the 4330-4360 area we'd want to see that smaller pullback for the RS so the breakout can rally up to that major resistance zone. This would give traders that are long the best move, and then when they flip to short it will be much safer as it's into an area that should produce a bigger pullback then just say a double top zone. This is what I see a possible based on the various time frame charts looking similar to prior periods where the RSI had the same pattern. Have a blessed day.