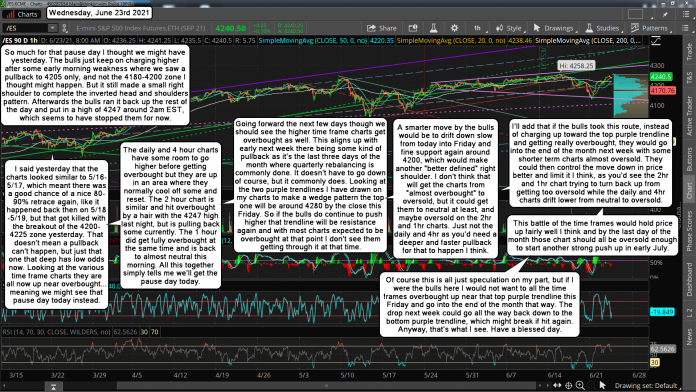 So much for that pause day I thought we might have yesterday. The bulls just keep on charging higher after some early morning weakness where we saw a pullback to 4205 only, and not the 4180-4200 zone I thought might happen. But it still made a small right shoulder to complete the inverted head and shoulders pattern. Afterwards the bulls ran it back up the rest of the day and put in a high of 4247 around 2am EST, which seems to have stopped them for now.

I said yesterday that the charts looked similar to 5/16-5/17, which meant there was a good chance of a nice 80-90% retrace again, like it happened back then on 5/18-5/19, but that got killed with the breakout of the 4200-4225 zone yesterday. That doesn't mean a pullback can't happen, but just that one that deep has low odds now. Looking at the various time frame charts they are all now up near overbought... meaning we might see that pause day today instead.

The daily and 4 hour charts have some room to go higher before getting overbought but they are up in an area where they normally cool off some and reset. The 2 hour chart is similar and hit overbought by a hair with the 4247 high last night, but is pulling back some currently. The 1 hour did get fully overbought at the same time and is back to almost neutral this morning. All this together simply tells me we'll get the pause day today.

Going forward the next few days though we should see the higher time frame charts get overbought as well. This aligns up with early next week there being some kind of pullback as it's the last three days of the month where quarterly rebalancing is commonly done. It doesn't have to go down of course, but it commonly does. Looking at the two purple trendlines I have drawn on my charts to make a wedge pattern the top one will be around 4280 by the close this Friday. So if the bulls do continue to push higher that trendline will be resistance again and with most charts expected to be overbought at that point I don't see them getting through it at that time.

A smarter move by the bulls would be to drift down slow from today into Friday and fine support again around 4200, which would make another "better defined" right shoulder. I don't think that will get the charts from "almost overbought" to oversold, but it could get them to neutral at least, and maybe oversold on the 2hr and 1hr charts. Just not the daily and 4hr as you'd need a deeper and faster pullback for that to happen I think.

I'll add that if the bulls took this route, instead of charging up toward the top purple trendline and getting really overbought, they would go into the end of the month next week with some shorter term charts almost oversold. They could then control the move down in price better and limit it I think, as you'd see the 2hr and 1hr chart trying to turn back up from getting too oversold while the daily and 4hr charts drift lower from neutral to oversold.

This battle of the time frames would hold price up fairly well I think and by the last day of the month those chart should all be oversold enough to start another strong push up in early July.

Of course this is all just speculation on my part, but if I were the bulls here I would not want to all the time frames overbought up near that top purple trendline this Friday and go into the end of the month that way. The drop next week could go all the way back down to the bottom purple trendline, which might break if hit again. Anyway, that's what I see. Have a blessed day.

P.S.  I shared these two charts yesterday in the chatroom... 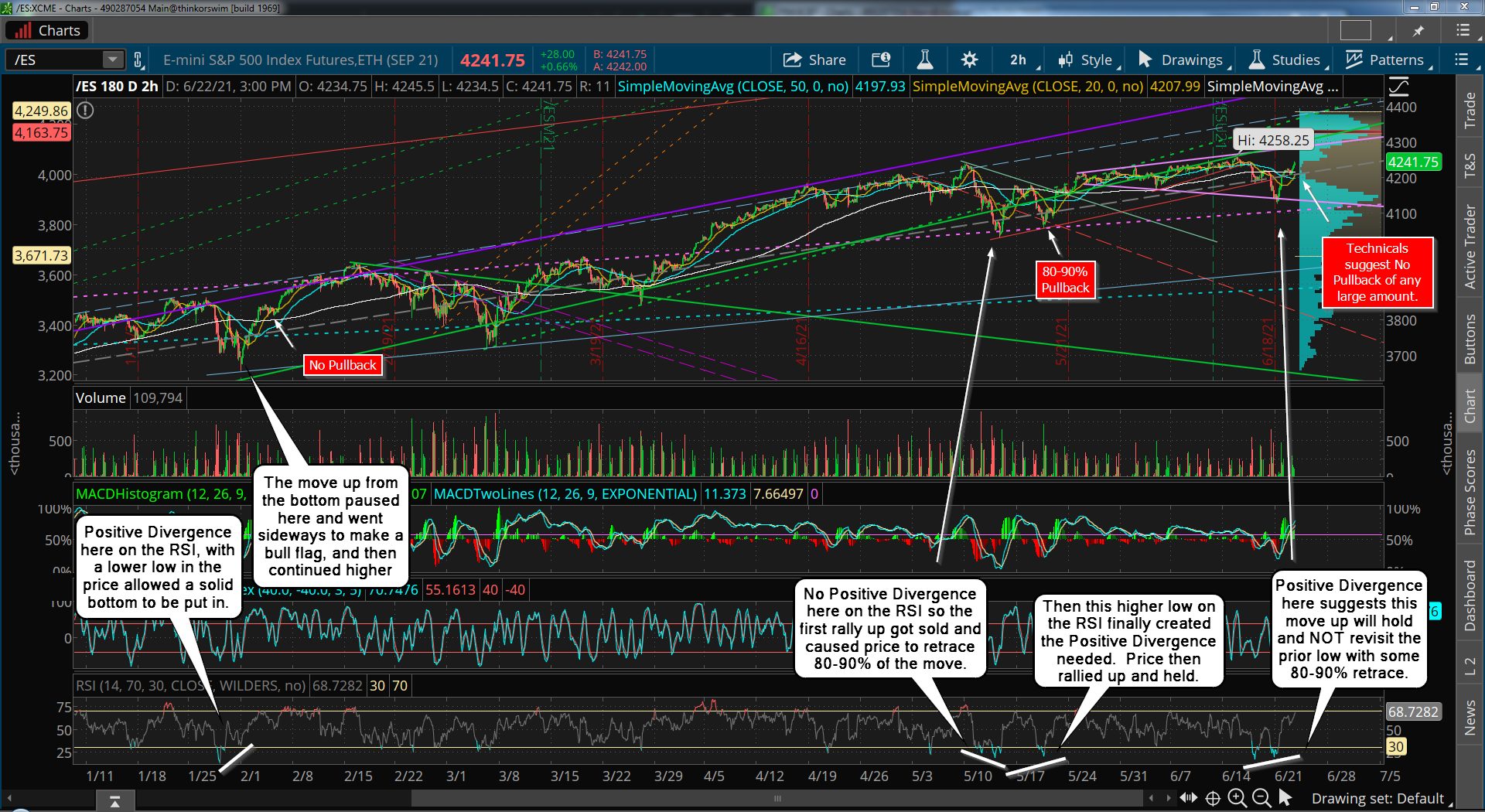 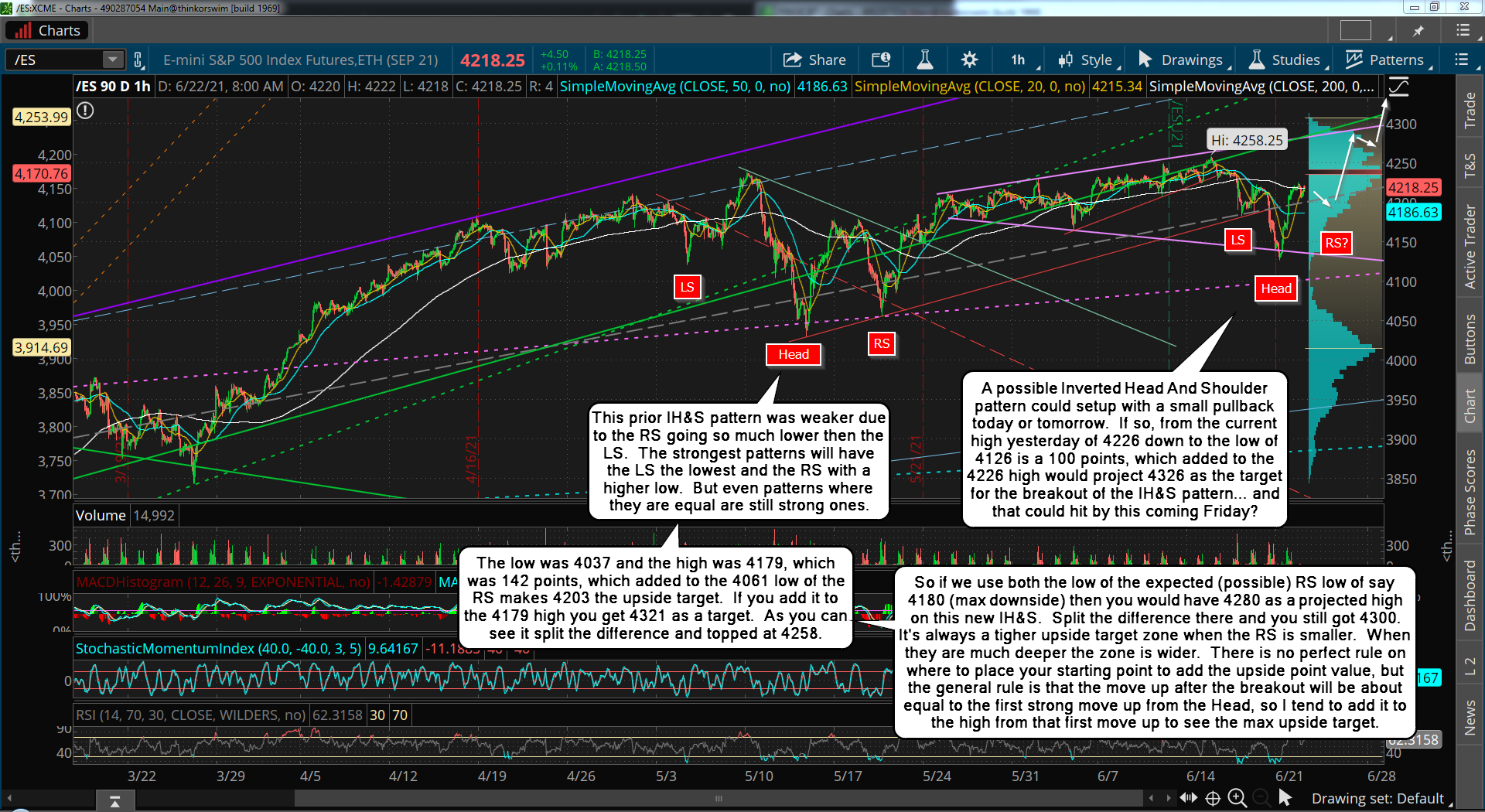