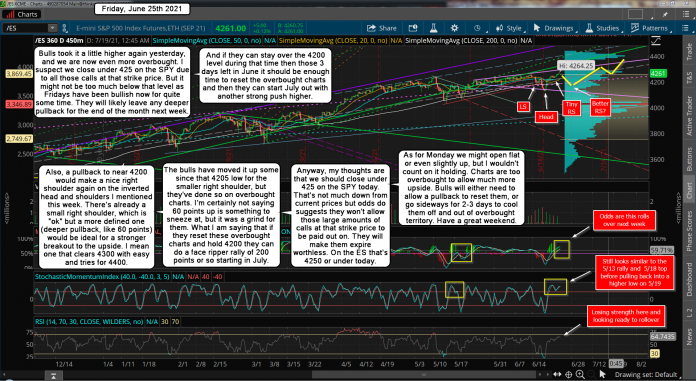 Bulls took it a little higher again yesterday, and we are now even more overbought. I suspect we close under 425 on the SPY due to all those calls at that strike price. But it might not be too much below that level as Fridays have been bullish now for quite some time. They will likely leave any deeper pullback for the end of the month next week.

And if they can stay over the 4200 level during that time then those 3 days left in June it should be enough time to reset the overbought charts and then they can start July out with another strong push higher.

Also, a pullback to near 4200 would make a nice right shoulder again on the inverted head and shoulders I mentioned this week. There's already a small right shoulder, which is "ok" but a more defined one (deeper pullback, like 60 points) would be ideal for a stronger breakout to the upside. I mean one that clears 4300 with easy and tries for 4400.

The bulls have moved it up some since that 4205 low for the smaller right shoulder, but they've done so on overbought charts. I'm certainly not saying 60 points up is something to sneeze at, but it was a grind for them. What I am saying that if they reset these overbought charts and hold 4200 they can do a face ripper rally of 200 points or so starting in July.

Anyway, my thoughts are that we should close under 425 on the SPY today. That's not much down from current prices but odds do suggests they won't allow those large amounts of calls at that strike price to be paid out on. They will make them expire worthless. On the ES that's 4250 or under today.

As for Monday we might open flat or even slightly up, but I wouldn't count on it holding. Charts are too overbought to allow much more upside. Bulls will either need to allow a pullback to reset them, or go sideways for 2-3 days to cool them off and out of overbought territory. Have a great weekend.