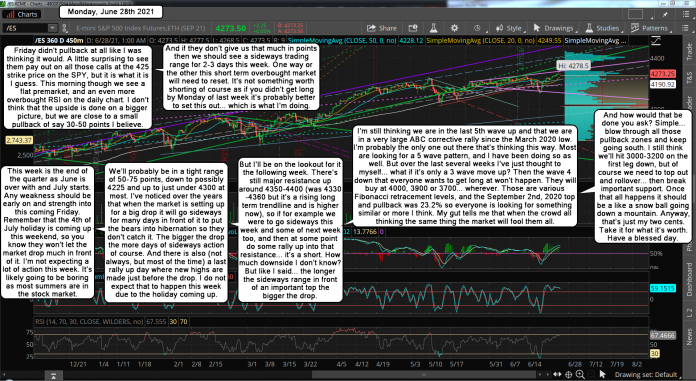 Friday didn't pullback at all like I was thinking it would. A little surprising to see them pay out on all those calls at the 425 strike price on the SPY, but it is what it is I guess. This morning though we see a flat premarket, and an even more overbought RSI on the daily chart. I don't think that the upside is done on a bigger picture, but we are close to a small pullback of say 30-50 points I believe.

And if they don't give us that much in points then we should see a sideways trading range for 2-3 days this week. One way or the other this short term overbought market will need to reset. It's not something worth shorting of course as if you didn't get long by Monday of last week it's probably better to set this out... which is what I'm doing.

This week is the end of the quarter as June is over with and July starts. Any weakness should be early on and strength into this coming Friday. Remember that the 4th of July holiday is coming up this weekend, so you know they won't let the market drop much in front of it. I'm not expecting a lot of action this week. It's likely going to be boring as most summers are in the stock market.

We'll probably be in a tight range of 50-75 points, down to possibly 4225 and up to just under 4300 at most. I've noticed over the years that when the market is setting up for a big drop it will go sideways for many days in front of it to put the bears into hibernation so they don't catch it. The bigger the drop the more days of sideways action of course. And there is also (not always, but most of the time) a last rally up day where new highs are made just before the drop. I do not expect that to happen this week due to the holiday coming up.

But I'll be on the lookout for it the following week. There's still major resistance up around 4350-4400 (was 4330-4360 but it's a rising long term trendlline and is higher now), so if for example we were to go sideways this week and some of next week too, and then at some point do some rally up into that resistance... it's a short. How much downside I don't know? But like I said... the longer the sideways range in front of an important top the bigger the drop.

I'm still thinking we are in the last 5th wave up and that we are in a very large ABC corrective rally since the March 2020 low. I'm probably the only one out there that's thinking this way. Most are looking for a 5 wave pattern, and I have been doing so as well. But over the last several weeks I've just thought to myself... what if it's only a 3 wave move up? Then the wave 4 down that everyone wants to get long at won't happen. They will buy at 4000, 3900 or 3700... wherever. Those are various Fibonacci retracement levels, and the September 2nd, 2020 top and pullback was 23.2% so everyone is looking for something similar or more I think. My gut tells me that when the crowd all thinking the same thing the market will fool them all.

And how would that be done you ask? Simple... blow through all those pullback zones and keep going south. I still think we'll hit 3000-3200 on the first leg down, but of course we need to top out and rollover... then break important support. Once that all happens it should be a like a snow ball going down a mountain. Anyway, that's just my two cents. Take it for what it's worth. Have a blessed day. 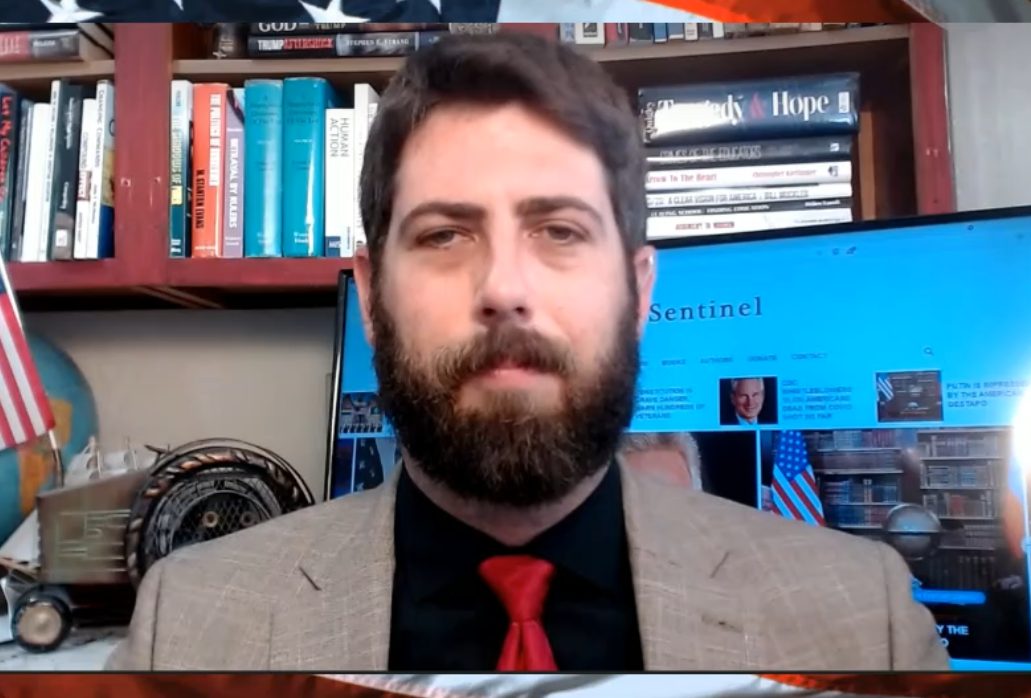