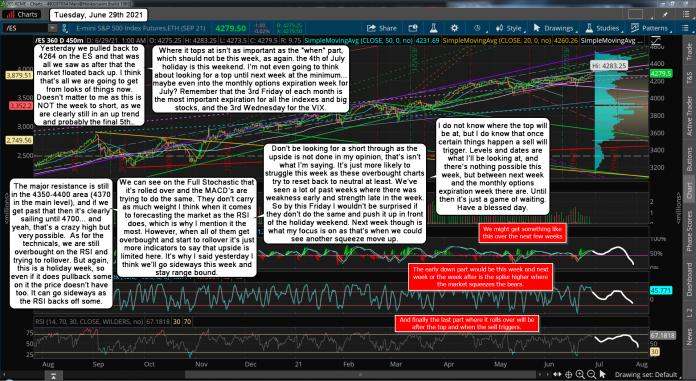 Yesterday we pulled back to 4264 on the ES and that was all we saw as after that the market floated back up. I think that's all we are going to get from looks of things now. Doesn't matter to me as this is NOT the week to short, as we are clearly still in an up trend and probably the final 5th wave.

Where it tops at isn't as important as the "when" part, which should not be this week, as again. the 4th of July holiday is this weekend. I'm not even going to think about looking for a top until next week at the minimum... maybe even into the monthly options expiration week for July? Remember that the 3rd Friday of each month is the most important expiration for all the indexes and big stocks, and the 3rd Wednesday for the VIX.

The major resistance is still in the 4350-4400 area (4370 in the main level), and if we get past that then it's clearly sailing until 4700... and yeah, that's a crazy high but very possible.  As for the technicals, we are still overbought on the RSI and trying to rollover. But again, this is a holiday week, so even if it does pullback some on it the price doesn't have too. It can go sideways as the RSI backs off some.

We can see on the Full Stochastic that it's rolled over and the MACD's are trying to do the same. They don't carry as much weight I think when it comes to forecasting the market as the RSI does, which is why I mention it the most. However, when all of them get overbought and start to rollover it's just more indicators to say that upside is limited here. It's why I said yesterday I think we'll go sideways this week and stay range bound.

Don't be looking for a short through as the upside is not done in my opinion, that's isn't what I'm saying. It's just more likely to struggle this week as these overbought charts try to reset back to neutral at least. We've seen a lot of past weeks where there was weakness early and strength late in the week. So by this Friday I wouldn't be surprised if they don't do the same and push it up in front of the holiday weekend. Next week though is what my focus is on as that's when we could see another squeeze move up.

I do not know where the top will be at, but I do know that once certain things happen a sell will trigger. Levels and dates are what I'll be looking at, and there's nothing possible this week, but between next week and the monthly options expiration week there are. Until then it's just a game of waiting. Have a blessed day.

WUHAN LAB 'VIRUS' LEAK: A CALCULATED DIVERSION FROM THE SIMPLE TRUTH - THERE IS NO 'VIRUS' - DAVID ICKE