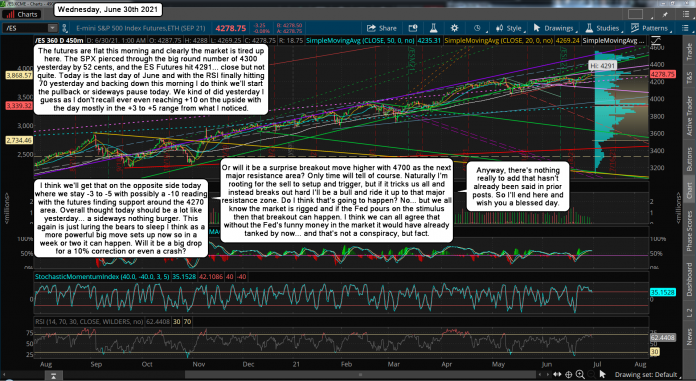 The futures are flat this morning and clearly the market is tired up here. The SPX pierced through the big round number of 4300 yesterday by 52 cents, and the ES Futures hit 4291... close but not quite. Today is the last day of June and with the RSI finally hitting 70 yesterday and backing down this morning I do think we'll start the pullback or sideways pause today. We kind of did yesterday I guess as I don't recall ever even reaching +10 on the upside with the day mostly in the +3 to +5 range from what I noticed.

I think we'll get that on the opposite side today where we stay -3 to -5 with possibly a -10 reading with the futures finding support around the 4270 area. Overall thought today should be a lot like yesterday... a sideways nothing burger. This again is just luring the bears to sleep I think as a more powerful big move sets up now so in a week or two it can happen. Will it be a big drop for a 10% correction or even a crash?

Or will it be a surprise breakout move higher with 4700 as the next major resistance area? Only time will tell of course. Naturally I'm rooting for the sell to setup and trigger, but if it tricks us all and instead breaks out hard I'll be a bull and ride it up to that major resistance zone. Do I think that's going to happen? No... but we all know the market is rigged and if the Fed pours on the stimulus then that breakout can happen. I think we can all agree that without the Fed's funny money in the market it would have already tanked by now... and that's not a conspiracy, but fact.

Anyway, there's nothing really to add that hasn't already been said in prior posts. So I'll end here and wish you a blessed day.

I Wonder If Biden Is Real Or Not?  Possibly He's Hillary Using This Face Manipulation Software?  I Can Not Think Of Anyone Else That Would Say The Stupid Things He Does Other Then That Witch.

Many people think the actors James Wood and/or Jim Carrey are playing Biden with a face mask on, which I could see that for sure as Carrey is certainly crazy enough to say and act like the bumbling idiot we see on TV right now.

Whether he's real or not isn't important as it's clearly not him running the show as we all know there are others behind the scenes pulling the strings.