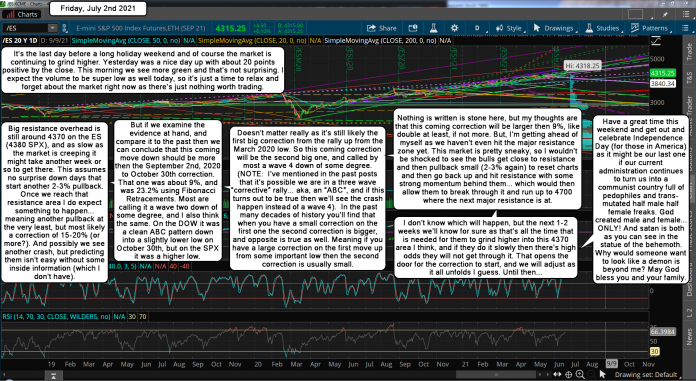 It's the last day before a long holiday weekend and of course the market is continuing to grind higher. Yesterday was a nice day up with about 20 points positive by the close. This morning we see more green and that's not surprising. I expect the volume to be super low as well today, so it's just a time to relax and forget about the market right now as there's just nothing worth trading.

Big resistance overhead is still around 4370 on the ES (4380 SPX), and as slow as the market is creeping it might take another week or so to get there. This assumes no surprise down days that start another 2-3% pullback. Once we reach that resistance area I do expect something to happen... meaning another pullback at the very least, but most likely a correction of 15-20% (or more?). And possibly we see another crash, but predicting them isn't easy without some inside information (which I don't have).

But if we examine the evidence at hand, and compare it to the past then we can conclude that this coming move down should be more then the September 2nd, 2020 to October 30th correction. That one was about 9%, and was 23.2% using Fibonacci Retracements. Most are calling it a wave two down of some degree, and I also think the same. On the DOW it was a clean ABC pattern down into a slightly lower low on October 30th, but on the SPX it was a higher low.

Doesn't matter really as it's still likely the first big correction from the rally up from the March 2020 low. So this coming correction will be the second big one, and called by most a wave 4 down of some degree. (NOTE:  I've mentioned in the past posts that it's possible we are in a three wave "corrective" rally... aka, an "ABC", and if this turns out to be true then we'll see the crash happen instead of a wave 4).  In the past many decades of history you'll find that when you have a small correction on the first one the second correction is bigger, and opposite is true as well. Meaning if you have a large correction on the first move up from some important low then the second correction is usually small.

Nothing is written is stone here, but my thoughts are that this coming correction will be larger then 9%, like double at least, if not more. But, I'm getting ahead of myself as we haven't even hit the major resistance zone yet. This market is pretty sneaky, so I wouldn't be shocked to see the bulls get close to resistance and then pullback small (2-3% again) to reset charts and then go back up and hit resistance with some strong momentum behind them... which would then allow them to break through it and run up to 4700 where the next major resistance is at.

I don't know which will happen, but the next 1-2 weeks we'll know for sure as that's all the time that is needed for them to grind higher into this 4370 area I think, and if they do it slowly then there's high odds they will not get through it. That opens the door for the correction to start, and we will adjust as it all unfolds I guess. Until then...

Have a great time this weekend and get out and celebrate Independence Day (for those in America) as it might be our last one if our current administration continues to turn us into a communist country full of pedophiles and trans-mutated half male half female freaks. God created male and female... ONLY! And satan is both as you can see in the statue of the behemoth. Why would someone want to look like a demon is beyond me? May God bless you and your family.