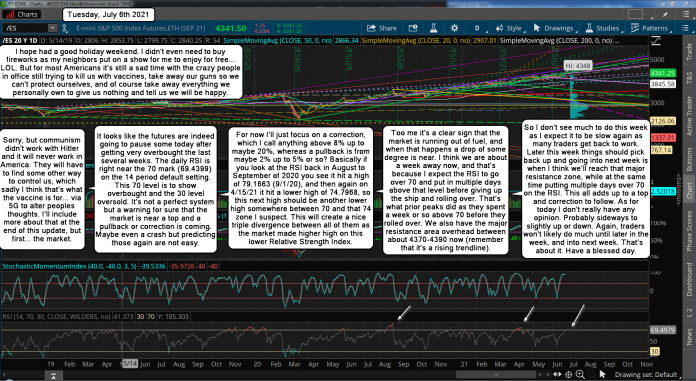 I hope had a good holiday weekend. I didn't even need to buy fireworks as my neighbors put on a show for me to enjoy for free... LOL. But for most Americans it's still a sad time with the crazy people in office still trying to kill us with vaccines, take away our guns so we can't protect ourselves, and of course take away everything we personally own to give us nothing and tell us we will be happy.

Sorry, but communism didn't work with Hitler and it will never work in America. They will have to find some other way to control us, which sadly I think that's what the vaccine is for... via 5G to alter peoples thoughts. I'll include more about that at the end of this update, but first... the market.

It looks like the futures are indeed going to pause some today after getting very overbought the last several weeks. The daily RSI is right near the 70 mark (69.4399) on the 14 period default setting. This 70 level is to show overbought and the 30 level oversold. It's not a perfect system but a warning for sure that the market is near a top and a pullback or correction is coming. Maybe even a crash but predicting those again are not easy.

For now I'll just focus on a correction, which I call anything above 8% up to maybe 20%, whereas a pullback is from maybe 2% up to 5% or so? Basically if you look at the RSI back in August to September of 2020 you see it hit a high of 79.1663 (9/1/20), and then again on 4/15/21 it hit a lower high of 74.7968, so this next high should be another lower high somewhere between 70 and that 74 zone I suspect. This will create a nice triple divergence between all of them as the market made higher high on this lower Relative Strength Index.

Too me it's a clear sign that the market is running out of fuel, and when that happens a drop of some degree is near. I think we are about a week away now, and that's because I expect the RSI to go over 70 and put in multiple days above that level before giving up the ship and rolling over. That's what prior peaks did as they spent a week or so above 70 before they rolled over. We also have the major resistance area overhead between about 4370-4390 now (remember that it's a rising trendline).

So I don't see much to do this week as I expect it to be slow again as many traders get back to work. Later this week things should pick back up and going into next week is when I think we'll reach that major resistance zone, while at the same time putting multiple days over 70 on the RSI. This all adds up to a top and correction to follow. As for today I don't really have any opinion. Probably sideways to slightly up or down. Again, traders won't likely do much until later in the week, and into next week. That's about it. Have a blessed day.

Dear People!
What if the masks and the people are breathing in the Graphene Oxide permanently!!!??

What if the mask that there to protect you is actually causing the problem?!!!!!!! But devious ness is the name of the game right and straight in your face!
Can some wise scientific people say something about this or is this nonsense?

This just in from Nicholas Veniamin ---

“Spanish researchers put the Pfizer vaccine under an electron microscope and found it contains 99% graphene oxide and hardly anything else.There is practically NO evidence that this "vaccine" is gene therapy. There is ZERO genetic material:  mRNA or DNA or spike protein. It means this "vaccine" has nothing to do with a so-called virus. This product wasn't developed to avoid an infection caused by a virus. The true purpose of this product remains hidden. No official statement from governments or health institutions has been made. The toxicity of graphene oxide is reason enough to stop the global vaccination program.

Okay, so what are the characteristics of graphene oxide and what are its known health hazards?

Each tiny nanoparticle acts like a knife and cuts through cell membranes, effectively killing living cells.  This in turn causes inflammation, as the body's immune system kicks in to clean up the cellular debris.

If the immune system can't keep up, the graphene oxide creates extremely tiny blood clots that can collect together to form larger clots.

Graphene oxide, like asbestos, is inert, thin, hard, and appears to cause its own form of cancer, similar to the way asbestos is linked to Mesothelioma.

Graphene has no bandwidth, so it cannot be turned off as an electromagnetic conductor a thousand times more effective than copper.

So people are being shot up with this crap and it is dispersing throughout every tissue of their bodies and absolutely nobody is on the string and accountable for this.

Not the pharmaceutical companies, because they got an out of jail free card from "the" U.S. Territorial Congress back in the 1980's, and not the Congress itself, because their corporation went bankrupt and they are now claiming that any responsibility accepted back in the 1980's when they gave Big Pharma their Lack of Accountability Card no longer applies.

Isn't this just wonderful, folks, you've got all these tiny, tiny knives killing cells in all parts of your body, and you are suffering the effects of this, and nobody is responsible for it --- except of course, for you, because you "volunteered" to take the jab.

According to the Spanish, this isn't a vaccine and it isn't even an mRNA gene therapy designed to reduce you to being a Genetically Modified Organism, owned under Patent.

It's a kill shot, literally.

But someone has to engineer and produce the right size cage to recapture the graphene oxide, and meantime....

If the results of this Spanish investigation are true, you've been attacked, ear tagged, and prepped for slaughter by your own dear Public Employees  --- a fact that both you and they have to come to grips with.
http://www.paulstramer.net/