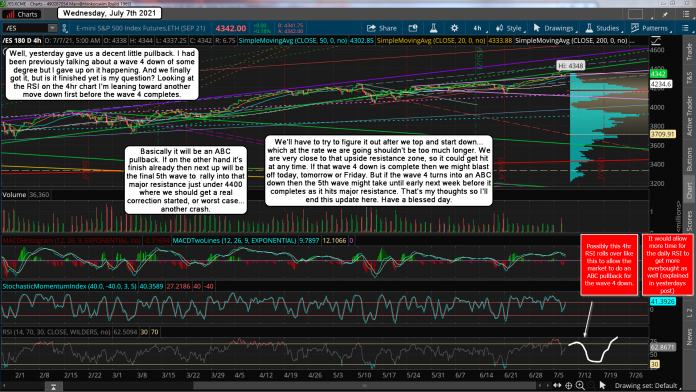 Well, yesterday gave us a decent little pullback. I had been previously talking about a wave 4 down of some degree but I gave up on it happening. And we finally got it, but is it finished yet is my question? Looking at the RSI on the 4hr chart I'm leaning toward another move down first before the wave 4 completes.

Basically it will be an ABC pullback. If on the other hand it's finish already then next up will be the final 5th wave to  rally into that major resistance just under 4400 where we should get a real correction started, or worst case... another crash.

We'll have to try to figure it out after we top and start down... which at the rate we are going shouldn't be too much longer. We are very close to that upside resistance zone, so it could get hit at any time. If that wave 4 down is complete then we might blast off today, tomorrow or Friday. But if the wave 4 turns into an ABC down then the 5th wave might take until early next week before it completes as it hits major resistance. That's my thoughts so I'll end this update here. Have a blessed day.