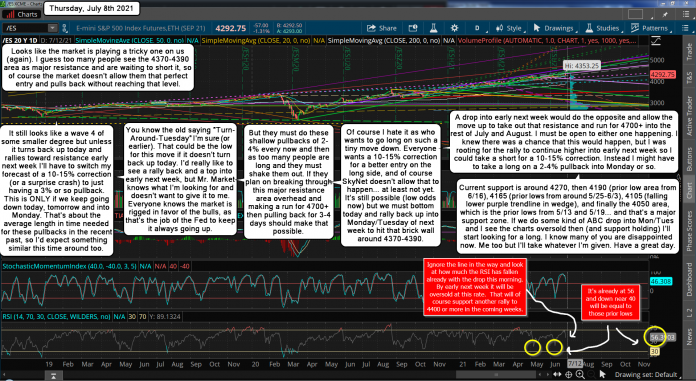 Looks like the market is playing a tricky one on us (again). I guess too many people see the 4370-4390 area as major resistance and are waiting to short it, so of course the market doesn't allow them that perfect entry and pulls back without reaching that level.

It still looks like a wave 4 of some smaller degree but unless it turns back up today and rallies toward resistance early next week I'll have to switch my forecast of a 10-15% correction (or a surprise crash) to just having a 3% or so pullback. This is ONLY if we keep going down today, tomorrow and into Monday. That's about the average length in time needed for these pullbacks in the recent past, so I'd expect something similar this time around too.

You know the old saying "Turn-Around-Tuesday" I'm sure (or earlier). That could be the low for this move if it doesn't turn back up today. I'd really like to see a rally back and a top into early next week, but Mr. Market knows what I'm looking for and doesn't want to give it to me. Everyone knows the market is rigged in favor of the bulls, as that's the job of the Fed to keep it always going up.

But they must do these shallow pullbacks of 2-4% every now and then as too many people are long and they must shake them out. If they plan on breaking through this major resistance area overhead and making a run for 4700+ then pulling back for 3-4 days should make that possible.

Of course I hate it as who wants to go long on such a tiny move down. Everyone wants a 10-15% correction for a better entry on the long side, and of course SkyNet doesn't allow that to happen... at least not yet. It's still possible (low odds now) but we must bottom today and rally back up into Monday/Tuesday of next week to hit that brick wall around 4370-4390.

A drop into early next week would do the opposite and allow the move up to take out that resistance and run for 4700+ into the rest of July and August. I must be open to either one happening. I knew there was a chance that this would happen, but I was rooting for the rally to continue higher into early next week so I could take a short for a 10-15% correction. Instead I might have to take a long on a 2-4% pullback into Monday or so.