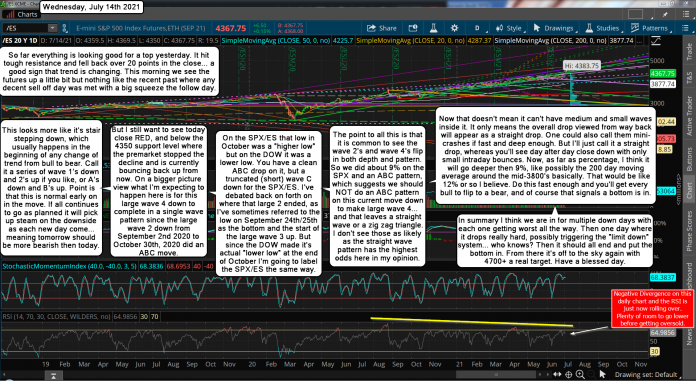 So far everything is looking good for a top yesterday. It hit tough resistance and fell back over 20 points in the close... a good sign that trend is changing. This morning we see the futures up a little bit but nothing like the recent past where any decent sell off day was met with a big squeeze the follow day.

This looks more like it's stair stepping down, which usually happens in the beginning of any change of trend from bull to bear. Call it a series of wave 1's down and 2's up if you like, or A's down and B's up. Point is that this is normal early on in the move. If all continues to go as planned it will pick up steam on the downside as each new day come... meaning tomorrow should be more bearish then today.

But I still want to see today close RED, and below the 4350 support level where the premarket stopped the decline and is currently bouncing back up from now. On a bigger picture view what I'm expecting to happen here is for this large wave 4 down to complete in a single wave pattern since the large wave 2 down from September 2nd 2020 to October 30th, 2020 did an ABC move.

On the SPX/ES that low in October was a "higher low" but on the DOW it was a lower low. You have a clean ABC drop on it, but a truncated (short) wave C down for the SPX/ES. I've debated back on forth on where that large 2 ended, as I've sometimes referred to the low on September 24th/25th as the bottom and the start of the large wave 3 up. But since the DOW made it's actual "lower low" at the end of October I'm going to label the SPX/ES the same way.

The point to all this is that it is common to see the wave 2's and wave 4's flip in both depth and pattern. So we did about 9% on the SPX and an ABC pattern, which suggests we should NOT do an ABC pattern on this current move down to make large wave 4... and that leaves a straight wave or a zig zag triangle. I don't see those as likely as the straight wave pattern has the highest odds here in my opinion.

Now that doesn't mean it can't have medium and small waves inside it. It only means the overall drop viewed from way back will appear as a straight drop. One could also call them mini-crashes if fast and deep enough. But I'll just call it a straight drop, whereas you'll see day after day close down with only small intraday bounces. Now, as far as percentage, I think it will go deeper then 9%, like possibly the 200 day moving average around the mid-3800's basically. That would be like 12% or so I believe. Do this fast enough and you'll get every bull to flip to a bear, and of course that signals a bottom is in.

In summary I think we are in for multiple down days with each one getting worst all the way. Then one day where it drops really hard, possibly triggering the "limit down" system... who knows? Then it should all end and put the bottom in. From there it's off to the sky again with 4700+ a real target. Have a blessed day.