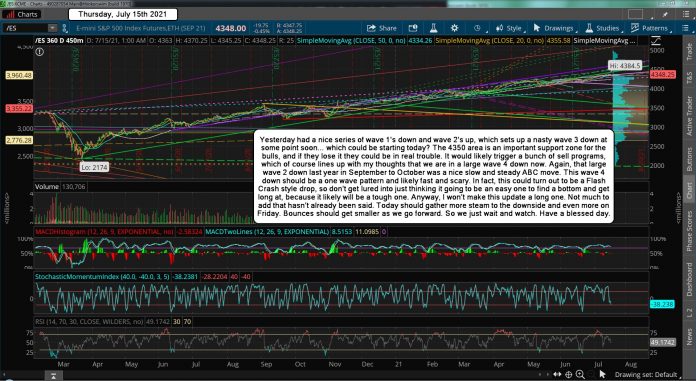 Yesterday had a nice series of wave 1's down and wave 2's up, which sets up a nasty wave 3 down at some point soon... which could be starting today? The 4350 area is an important support zone for the bulls, and if they lose it they could be in real trouble. It would likely trigger a bunch of sell programs, which of course lines up with my thoughts that we are in a large wave 4 down now. Again, that large wave 2 down last year in September to October was a nice slow and steady ABC move. This wave 4 down should be a one wave pattern and likely fast and scary. In fact, this could turn out to be a Flash Crash style drop, so don't get lured into just thinking it going to be an easy one to find a bottom and get long at, because it likely will be a tough one. Anyway, I won't make this update a long one. Not much to add that hasn't already been said. Today should gather more steam to the downside and even more on Friday. Bounces should get smaller as we go forward. So we just wait and watch. Have a blessed day.