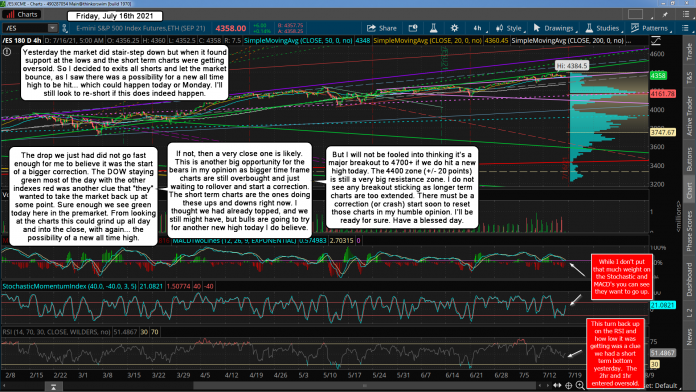 Yesterday the market did stair-step down but when it found support at the lows and the short term charts were getting oversold. So I decided to exits all shorts and let the market bounce, as I saw there was a possibility for a new all time high to be hit... which could happen today or Monday. I'll still look to re-short if this does indeed happen.

The drop we just had did not go fast enough for me to believe it was the start of a bigger correction. The DOW staying green most of the day with the other indexes red was another clue that "they" wanted to take the market back up at some point. Sure enough we see green today here in the premarket. From looking at the charts this could grind up all day and into the close, with again... the possibility of a new all time high.

If not, then a very close one is likely. This is another big opportunity for the bears in my opinion as bigger time frame charts are still overbought and just waiting to rollover and start a correction. The short term charts are the ones doing these ups and downs right now. I thought we had already topped, and we still might have, but bulls are going to try for another new high today I do believe.

But I will not be fooled into thinking it's a major breakout to 4700+ if we do hit a new high today. The 4400 zone (+/- 20 points) is still a very big resistance zone. I do not see any breakout sticking as longer term charts are too extended. There must be a correction (or crash) start soon to reset those charts in my humble opinion. I'll be ready for sure. Have a blessed day.