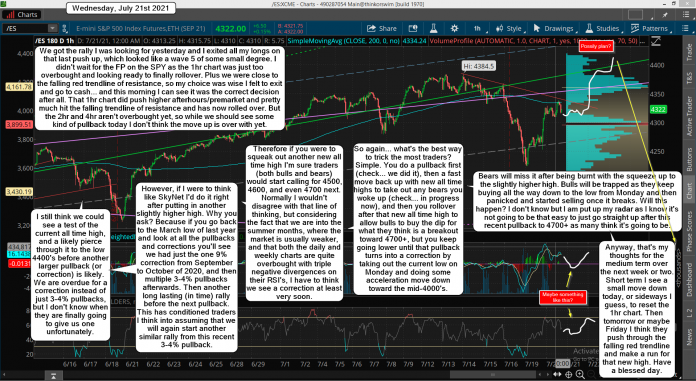 We got the rally I was looking for yesterday and I exited all my longs on that last push up, which looked like a wave 5 of some small degree. I didn't wait for the FP on the SPY as the 1hr chart was just too overbought and looking ready to finally rollover. Plus we were close to the falling red trendline of resistance, so my choice was wise I felt to exit and go to cash... and this morning I can see it was the correct decision after all. That 1hr chart did push higher afterhours/premarket and pretty much hit the falling trendline of resistance and has now rolled over. But the 2hr and 4hr aren't overbought yet, so while we should see some kind of pullback today I don't think the move up is over with yet.

I still think we could see a test of the current all time high, and a likely pierce through it to the low 4400's before another larger pullback (or correction) is likely. We are overdue for a correction instead of just 3-4% pullbacks, but I don't know when they are finally going to give us one unfortunately.

However, if I were to think like SkyNet I'd do it right after putting in another slightly higher high. Why you ask? Because if you go back to the March low of last year and look at all the pullbacks and corrections you'll see we had just the one 9% correction from September to October of 2020, and then multiple 3-4% pullbacks afterwards. Then another long lasting (in time) rally before the next pullback. This has conditioned traders I think into assuming that we will again start another similar rally from this recent 3-4% pullback.

Therefore if you were to squeak out another new all time high I'm sure traders (both bulls and bears) would start calling for 4500, 4600, and even 4700 next. Normally I wouldn't disagree with that line of thinking, but considering the fact that we are into the summer months, where the market is usually weaker, and that both the daily and weekly charts are quite overbought with triple negative divergences on their RSI's, I have to think we see a correction at least very soon.

So again... what's the best way to trick the most traders? Simple. You do a pullback first (check... we did it), then a fast move back up with new all time highs to take out any bears you woke up (check... in progress now), and then you rollover after that new all time high to allow bulls to buy the dip for what they think is a breakout toward 4700+, but you keep going lower until that pullback turns into a correction by taking out the current low on Monday and doing some acceleration move down toward the mid-4000's.

Bears will miss it after being burnt with the squeeze up to the slightly higher high. Bulls will be trapped as they keep buying all the way down to the low from Monday and then panicked and started selling once it breaks. Will this happen? I don't know but I am put up my radar as I know it's not going to be that easy to just go straight up after this recent pullback to 4700+ as many think it's going to be.

Anyway, that's my thoughts for the medium term over the next week or two. Short term I see a small move down today, or sideways I guess, to reset the 1hr chart. Then tomorrow or maybe Friday I think they push through the falling red trendline and make a run for that new high. Have a blessed day.