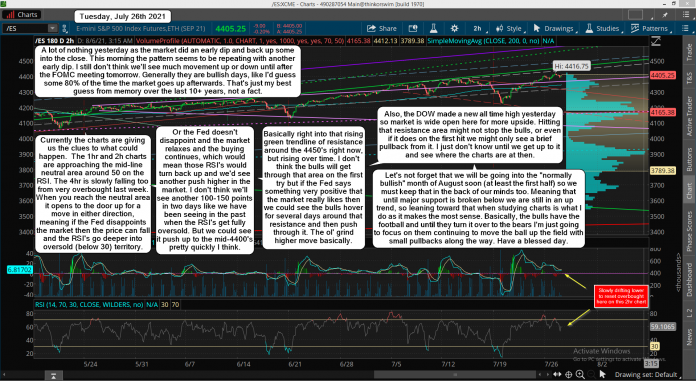 A lot of nothing yesterday as the market did an early dip and back up some into the close. This morning the pattern seems to be repeating with another early dip. I still don't think we'll see much movement up or down until after the FOMC meeting tomorrow. Generally they are bullish days, like I'd guess some 80% of the time the market goes up afterwards. That's just my best guess from memory over the last 10+ years, not a fact.

Currently the charts are giving us the clues to what could happen.  The 1hr and 2h charts are approaching the mid-line neutral area around 50 on the RSI. The 4hr is slowly falling too from very overbought last week. When you reach the neutral area it opens to the door up for a move in either direction, meaning if the Fed disappoints the market then the price can fall and the RSI's go deeper into oversold (below 30) territory.

Or the Fed doesn't disappoint and the market relaxes and the buying continues, which would mean those RSI's would turn back up and we'd see another push higher in the market. I don't think we'll see another 100-150 points in two days like we have been seeing in the past when the RSI's get fully oversold. But we could see it push up to the mid-4400's pretty quickly I think.

Basically right into that rising green trendline of resistance around the 4450's right now, but rising over time. I don't think the bulls will get through that area on the first try but if the Fed says something very positive that the market really likes then we could see the bulls hover for several days around that resistance and then push through it. The ol' grind higher move basically.

Also, the DOW made a new all time high yesterday so market is wide open here for more upside. Hitting that resistance area might not stop the bulls, or even if it does on the first hit we might only see a brief pullback from it. I just don't know until we get up to it and see where the charts are at then.

Let's not forget that we will be going into the "normally bullish" month of August soon (at least the first half) so we must keep that in the back of our minds too. Meaning that until major support is broken below we are still in an up trend, so leaning toward that when studying charts is what I do as it makes the most sense. Basically, the bulls have the football and until they turn it over to the bears I'm just going to focus on them continuing to move the ball up the field with small pullbacks along the way. Have a blessed day.