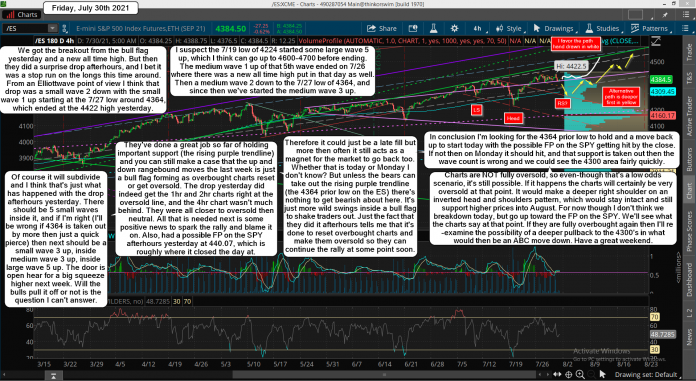 We got the breakout from the bull flag yesterday and a new all time high. But then they did a surprise drop afterhours, and I bet it was a stop run on the longs this time around. From an Elliottwave point of view I think that drop was a small wave 2 down with the small wave 1 up starting at the 7/27 low around 4364, which ended at the 4422 high yesterday.

Of course it will subdivide and I think that's just what has happened with the drop afterhours yesterday. There should be 5 small waves inside it, and if I'm right (I'll be wrong if 4364 is taken out by more then just a quick pierce) then next should be a small wave 3 up, inside medium wave 3 up, inside large wave 5 up. The door is open hear for a big squeeze higher next week. Will the bulls pull it off or not is the question I can't answer.

They've done a great job so far of holding important support (the rising purple trendline) and you can still make a case that the up and down rangebound moves the last week is just a bull flag forming as overbought charts reset or get oversold. The drop yesterday did indeed get the 1hr and 2hr charts right at the oversold line, and the 4hr chart wasn't much behind. They were all closer to oversold then neutral. All that is needed next is some positive news to spark the rally and blame it on. Also, had a possible FP on the SPY afterhours yesterday at 440.07, which is roughly where it closed the day at.

Therefore it could just be a late fill but more then often it still acts as a magnet for the market to go back too. Whether that is today or Monday I don't know? But unless the bears can take out the rising purple trendline (the 4364 prior low on the ES) there's nothing to get bearish about here. It's just more wild swings inside a bull flag to shake traders out. Just the fact that they did it afterhours tells me that it's done to reset overbought charts and make them oversold so they can continue the rally at some point soon.

In conclusion I'm looking for the 4364 prior low to hold and a move back up to start today with the possible FP on the SPY getting hit by the close. If not then on Monday it should hit, and that support is taken out then the wave count is wrong and we could see the 4300 area fairly quickly.

Charts are NOT fully oversold, so even-though that's a low odds scenario, it's still possible. If it happens the charts will certainly be very oversold at that point. It would make a deeper right shoulder on an inverted head and shoulders pattern, which would stay intact and still support higher prices into August. For now though I don't think we breakdown today, but go up toward the FP on the SPY. We'll see what the charts say at that point. If they are fully overbought again then I'll re-examine the possibility of a deeper pullback to the 4300's in what would then be an ABC move down. Have a great weekend. 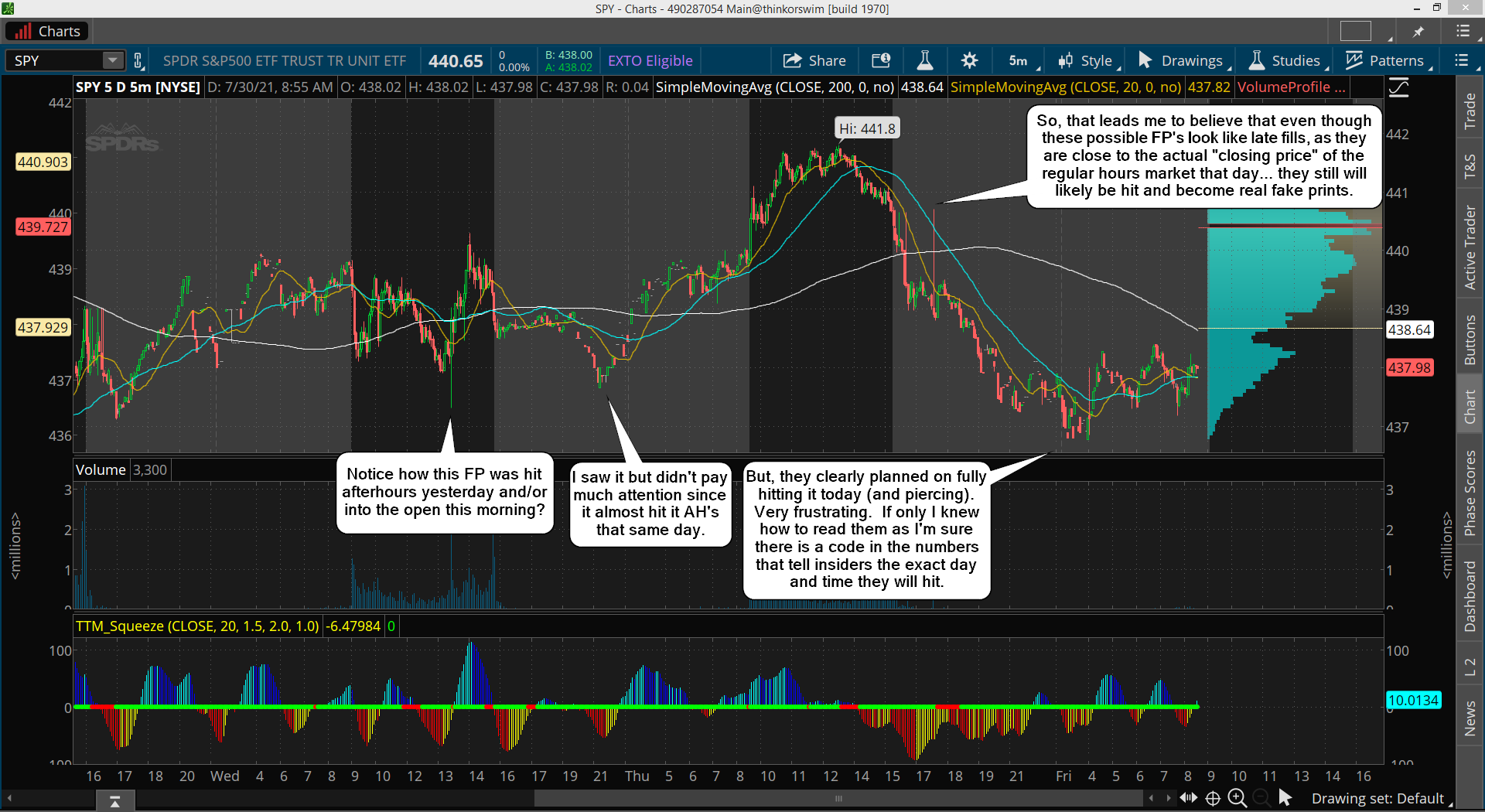