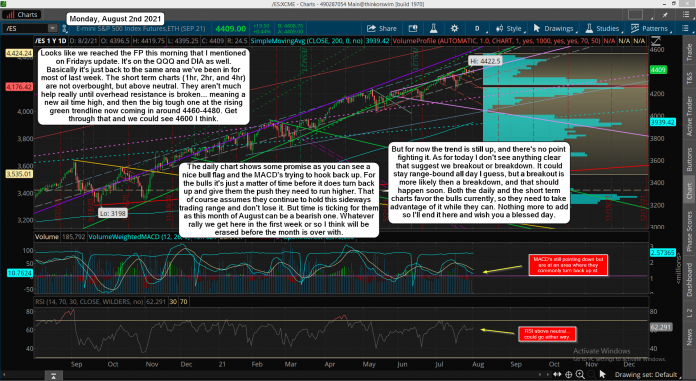 Looks like we reached the FP this morning that I mentioned on Fridays update. It's on the QQQ and DIA as well. Basically it's just back to the same area we've been in for most of last week. The short term charts (1hr, 2hr, and 4hr) are not overbought, but above neutral. They aren't much help really until overhead resistance is broken... meaning a new ail time high, and then the big tough one at the rising green trendline now coming in around 4460-4480. Get through that and we could see 4600 I think.

The daily chart shows some promise as you can see a nice bull flag and the MACD's trying to hook back up. For the bulls it's just a matter of time before it does turn back up and give them the push they need to run higher. That of course assumes they continue to hold this sideways trading range and don't lose it. But time is ticking for them as this month of August can be a bearish one. Whatever rally we get here in the first week or so I think will be erased before the month is over with.

But for now the trend is still up, and there's no point fighting it. As for today I don't see anything clear that suggest we breakout or breakdown. It could stay range-bound all day I guess, but a breakout is more likely then a breakdown, and that should happen soon. Both the daily and the short term charts favor the bulls currently, so they need to take advantage of it while they can. Nothing more to add so I'll end it here and wish you a blessed day.