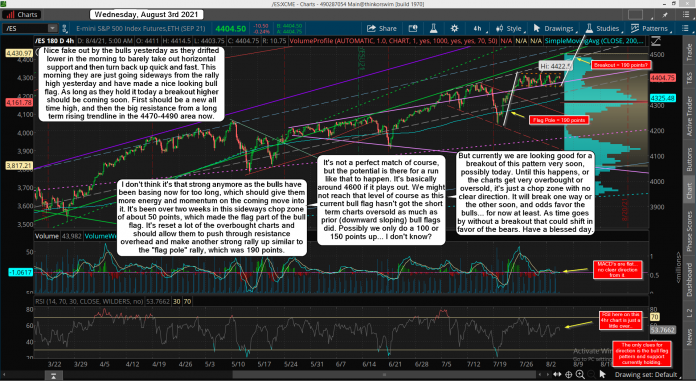 Nice fake out by the bulls yesterday as they drifted lower in the morning to barely take out horizontal support and then turn back up quick and fast. This morning they are just going sideways from the rally high yesterday and have made a nice looking bull flag. As long as they hold it today a breakout higher should be coming soon. First should be a new all time high, and then the big resistance from a long term rising trendline in the 4470-4490 area now.

I don't think it's that strong anymore as the bulls have been basing now for too long, which should give them more energy and momentum on the coming move into it. It's been over two weeks in this sideways chop zone of about 50 points, which made the flag part of the bull flag. It's reset a lot of the overbought charts and should allow them to push through resistance overhead and make another strong rally up similar to the "flag pole" rally, which was 190 points.

It's not a perfect match of course, but the potential is there for a run like that to happen. It's basically around 4600 if it plays out. We might not reach that level of course as this current bull flag hasn't got the short term charts oversold as much as prior (downward sloping) bull flags did. Possibly we only do a 100 or 150 points up... I don't know?

But currently we are looking good for a breakout of this pattern very soon, possibly today. Until this happens, or the charts get very overbought or oversold, it's just a chop zone with no clear direction. It will break one way or the other soon, and odds favor the bulls... for now at least. As time goes by without a breakout that could shift in favor of the bears. Have a blessed day.