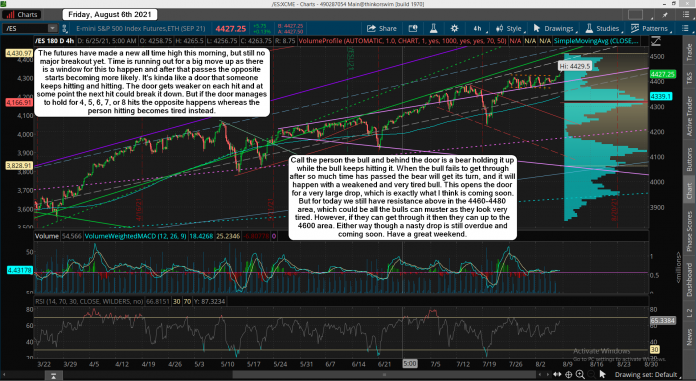 The futures have made a new all time high this morning, but still no major breakout yet. Time is running out for a big move up as there is a window for this to happen and after that passes the opposite starts becoming more likely. It's kinda like a door that someone keeps hitting and hitting. The door gets weaker on each hit and at some point the next hit could break it down. But if the door manages to hold for 4, 5, 6, 7, or 8 hits the opposite happens whereas the person hitting becomes tired instead.

Call the person the bull and behind the door is a bear holding it up while the bull keeps hitting it. When the bull fails to get through after so much time has passed the bear will get its turn, and it will happen with a weakened and very tired bull. This opens the door for a very large drop, which is exactly what I think is coming soon. But for today we still have resistance above in the 4460-4480 area, which could be all the bulls can muster as they look very tired. However, if they can get through it then they can up to the 4600 area. Either way though a nasty drop is still overdue and coming soon. Have a great weekend.