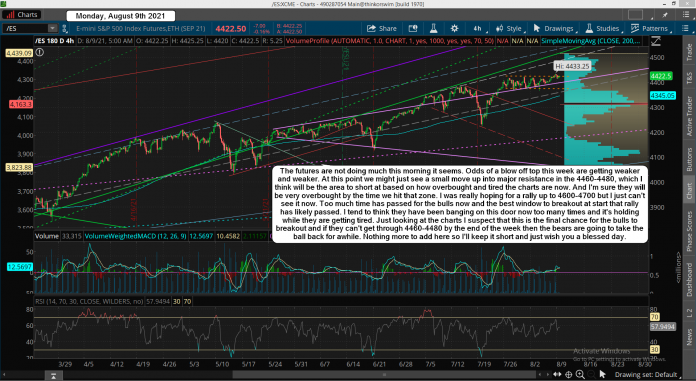 The futures are not doing much this morning it seems. Odds of a blow off top this week are getting weaker and weaker. At this point we might just see a small move up into major resistance in the 4460-4480, which I think will be the area to short at based on how overbought and tired the charts are now. And I'm sure they will be very overbought by the time we hit that zone. I was really hoping for a rally up to 4600-4700 but I just can't see it now. Too much time has passed for the bulls now and the best window to breakout at start that rally has likely passed. I tend to think they have been banging on this door now too many times and it's holding while they are getting tired. Just looking at the charts I suspect that this is the final chance for the bulls to breakout and if they can't get through 4460-4480 by the end of the week then the bears are going to take the ball back for awhile. Nothing more to add here so I'll keep it short and just wish you a blessed day.