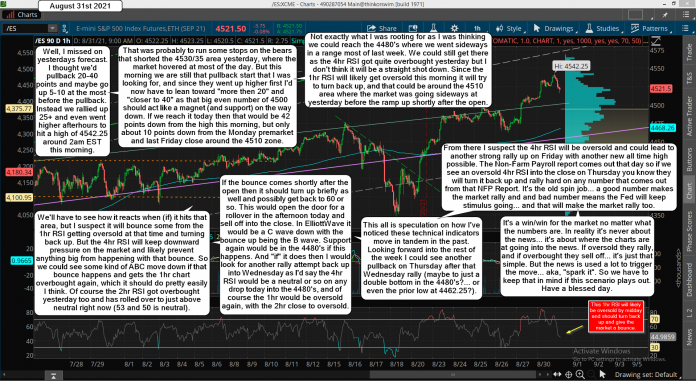 Well, I missed on yesterdays forecast. I thought we'd pullback 20-40 points and maybe go up 5-10 at the most before the pullback. Instead we rallied up 25+ and even went higher afterhours to hit a high of 4542.25 around 2am EST this morning.

That was probably to run some stops on the bears that shorted the 4530/35 area yesterday, where the market hovered at most of the day. But this morning we are still that pullback start that I was looking for, and since they went up higher first I'd now have to lean toward "more then 20" and "closer to 40" as that big even number of 4500 should act like a magnet (and support) on the way down. If we reach it today then that would be 42 points down from the high this morning, but only about 10 points down from the Monday premarket and last Friday close around the 4510 zone.

Not exactly what I was rooting for as I was thinking we could reach the 4480's where we went sideways in a range most of last week. We could still get there as the 4hr RSI got quite overbought yesterday but I don't think it will be a straight shot down. Since the 1hr RSI will likely get oversold this morning it will try to turn back up, and that could be around the 4510 area where the market was going sideways at yesterday before the ramp up shortly after the open.

We'll have to see how it reacts when (if) it hits that area, but I suspect it will bounce some from the 1hr RSI getting oversold at that time and turning back up. But the 4hr RSI will keep downward pressure on the market and likely prevent anything big from happening with that bounce. So we could see some kind of ABC move down if that bounce happens and gets the 1hr chart overbought again, which it should do pretty easily I think. Of course the 2hr RSI got overbought yesterday too and has rolled over to just above neutral right now (53 and 50 is neutral).

If the bounce comes shortly after the open then it should turn up briefly as well and possibly get back to 60 or so. This would open the door for a rollover in the afternoon today and sell off into the close. In ElliottWave it would be a C wave down with the bounce up being the B wave. Support again would be in the 4480's if this happens. And "if" it does then I would look for another rally attempt back up into Wednesday as I'd say the 4hr RSI would be a neutral or so on any drop today into the 4480's, and of course the 1hr would be oversold again, with the 2hr close to oversold.

This all is speculation on how I've noticed these technical indicators move in tandem in the past. Looking forward into the rest of the week I could see another pullback on Thursday after that Wednesday rally (maybe to just a double bottom in the 4480's?... or even the prior low at 4462.25?).

From there I suspect the 4hr RSI will be oversold and could lead to another strong rally up on Friday with another new all time high possible. The Non-Farm Payroll report comes out that day so if we see an oversold 4hr RSI into the close on Thursday you know they will turn it back up and rally hard on any number that comes out from that NFP Report. It's the old spin job... a good number makes the market rally and and bad number means the Fed will keep stimulus going... and that will make the market rally too.

It's a win/win for the market no matter what the numbers are. In reality it's never about the news... it's about where the charts are at going into the news. If oversold they rally, and if overbought they sell off... it's just that simple. But the news is used a lot to trigger the move... aka, "spark it". So we have to keep that in mind if this scenario plays out. Have a blessed day.