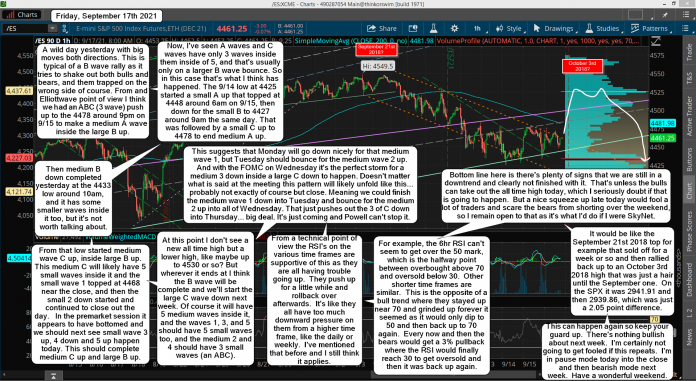 A wild day yesterday with big moves both directions. This is typical of a B wave rally as it tries to shake out both bulls and bears, and them trapped on the wrong side of course. From and Elliottwave point of view I think we had an ABC (3 wave) push up to the 4478 around 9pm on 9/15 to make a medium A wave inside the large B up.

Then medium B down completed yesterday at the 4433 low around 10am, and it has some smaller waves inside it too, but it's not worth talking about.

From that low started medium wave C up, inside large B up. This medium C will likely have 5 small waves inside it and the small wave 1 topped at 4468 near the close, and then the small 2 down started and continued to close out the day.   In the premarket session it appears to have bottomed and we should next see small wave 3 up, 4 down and 5 up happen today. This should complete medium C up and large B up.

At this point I don't see a new all time high but a lower high, like maybe up to 4530 or so? But wherever it ends at I think the B wave will be complete and we'll start the large C wave down next week. Of course it will have 5 medium waves inside it, and the waves 1, 3, and 5 should have 5 small waves too, and the medium 2 and 4 should have 3 small waves (an ABC).

This suggests that Monday will go down nicely for that medium wave 1, but Tuesday should bounce for the medium wave 2 up. And with the FOMC on Wednesday it's the perfect storm for a medium 3 down inside a large C down to happen. Doesn't matter what is said at the meeting this pattern will likely unfold like this... probably not exactly of course but close. Meaning we could finish the medium wave 1 down into Tuesday and bounce for the medium 2 up into all of Wednesday. That just pushes out the 3 of C down into Thursday... big deal. It's just coming and Powell can't stop it.

From a technical point of view the RSI's on the various time frames are supportive of this as they are all having trouble going up.  They push up for a little while and rollback over afterwards.  It's like they all have too much downward pressure on them from a higher time frame, like the daily or weekly.  I've mentioned that before and I still think it applies.

For example, the 6hr RSI can't seem to get over the 50 mark, which is the halfway point between overbought above 70 and oversold below 30.  Other shorter time frames are similar.  This is the opposite of a bull trend where they stayed up near 70 and grinded up forever it seemed as it would only dip to 50 and then back up to 70 again.  Every now and then the bears would get a 3% pullback where the RSI would finally reach 30 to get oversold and then it was back up again.

Bottom line here is there's plenty of signs that we are still in a downtrend and clearly not finished with it.  That's unless the bulls can take out the all time high today, which I seriously doubt if that is going to happen.  But a nice squeeze up late today would fool a lot of traders and scare the bears from shorting over the weekend, so I remain open to that as it's what I'd do if I were SkyNet.

This can happen again so keep your guard up.  There's nothing bullish about next week.  I'm certainly not going to get fooled if this repeats.  I'm in pause mode today into the close and then bearish mode next week.  Have a wonderful weekend.