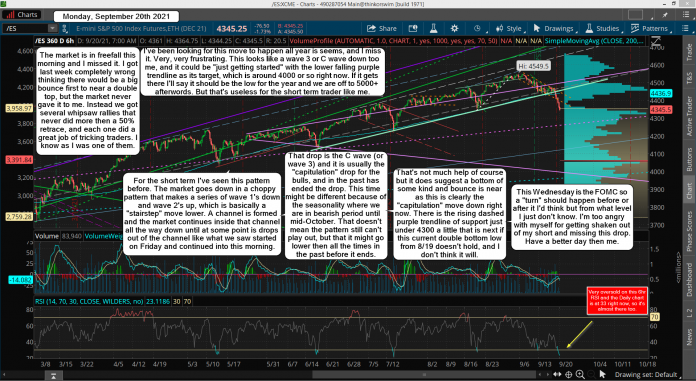 The market is in freefall this morning and I missed it. I got last week completely wrong thinking there would be a big bounce first to near a double top, but the market never gave it to me. Instead we got several whipsaw rallies that never did more then a 50% retrace, and each one did a great job of tricking traders. I know as I was one of them.

I've been looking for this move to happen all year is seems, and I miss it. Very, very frustrating. This looks like a wave 3 or C wave down too me, and it could be "just getting started" with the lower falling purple trendline as its target, which is around 4000 or so right now. If it gets there I'll say it should be the low for the year and we are off to 5000+ afterwords. But that's useless for the short term trader like me.

For the short term I've seen this pattern before. The market goes down in a choppy pattern that makes a series of wave 1's down and wave 2's up, which is basically a "stairstep" move lower. A channel is formed and the market continues inside that channel all the way down until at some point is drops out of the channel like what we saw started on Friday and continued into this morning.

That drop is the C wave (or wave 3) and it is usually the "capitulation" drop for the bulls, and in the past has ended the drop. This time might be different because of the seasonality where we are in bearish period until mid-October. That doesn't mean the pattern still can't play out, but that it might go lower then all the times in the past before it ends.

That's not much help of course but it does suggest a bottom of some kind and bounce is near as this is clearly the "capitulation" move down right now. There is the rising dashed purple trendline of support just under 4300 a little that is next if this current double bottom low from 8/19 doesn't hold, and I don't think it will.

This Wednesday is the FOMC so a "turn" should happen before or after it I'd think but from what level I just don't know. I'm too angry with myself for getting shaken out of my short and missing this drop. Have a better day then me.