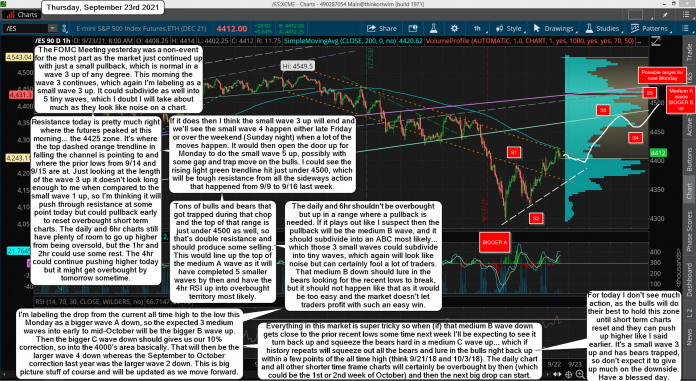 The FOMC Meeting yesterday was a non-event for the most part as the market just continued up with just a small pullback, which is normal in a wave 3 up of any degree. This morning the wave 3 continues, which again I'm labeling as a small wave 3 up. It could subdivide as well into 5 tiny waves, which I doubt I will take about much as they look like noise on a chart.

Resistance today is pretty much right where the futures peaked at this morning... the 4425 zone. It's where the top dashed orange trendline in falling the channel is pointing to and where the prior lows from 9/14 and 9/15 are at. Just looking at the length of the wave 3 up it doesn't look long enough to me when compared to the small wave 1 up, so I'm thinking it will push through resistance at some point today but could pullback early to reset overbought short term charts. The daily and 6hr charts still have plenty of room to go up higher from being oversold, but the 1hr and 2hr could use some rest. The 4hr could continue pushing higher today but it might get overbought by tomorrow sometime.

If it does then I think the small wave 3 up will end and we'll see the small wave 4 happen either late Friday or over the weekend (Sunday night) when a lot of the moves happen. It would then open the door up for Monday to do the small wave 5 up, possibly with some gap and trap move on the bulls. I could see the rising light green trendline hit just under 4500, which will be tough resistance from all the sideways action that happened from 9/9 to 9/16 last week.

Tons of bulls and bears that got trapped during that chop and the top of that range is just under 4500 as well, so that's double resistance and should produce some selling. This would line up the top of the medium A wave as it will have completed 5 smaller waves by then and have the 4hr RSI up into overbought territory most likely.

The daily and 6hr shouldn't be overbought but up in a range where a pullback is needed. If it plays out like I suspect then the pullback will be the medium B wave, and it should subdivide into an ABC most likely... which those 3 small waves could subdivide into tiny waves, which again will look like noise but can certainly fool a lot of traders. That medium B down should lure in the bears looking for the recent lows to break, but it should not happen like that as it would be too easy and the market doesn't let traders profit with such an easy win.

Everything in this market is super tricky so when (if) that medium B wave down gets close to the prior recent lows some time next week I'll be expecting to see it turn back up and squeeze the bears hard in a medium C wave up... which if history repeats will squeeze out all the bears and lure in the bulls right back up within a few points of the all time high (think 9/21/18 and 10/3/18). The daily chart and all other shorter time frame charts will certainly be overbought by then (which could be the 1st or 2nd week of October) and then the next big drop can start.

I'm labeling the drop from the current all time high to the low this Monday as a bigger wave A down, so the expected 3 medium waves into early to mid-October will be the bigger B wave up. Then the bigger C wave down should gives us our 10% correction, so into the 4000's area basically. That will then be the larger wave 4 down whereas the September to October correction last year was the larger wave 2 down. This is big picture stuff of course and will be updated as we move forward.

For today I don't see much action, as the bulls will do their best to hold this zone until short term charts reset and they can push up higher like I said earlier. It's a small wave 3 up and has bears trapped, so don't expect it to give up much on the downside. Have a blessed day.