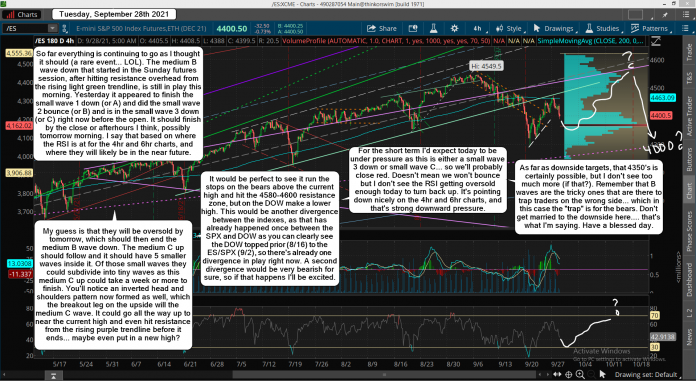 So far everything is continuing to go as I thought it should (a rare event... LOL). The medium B wave down that started in the Sunday futures session, after hitting resistance overhead from the rising light green trendline, is still in play this morning. Yesterday it appeared to finish the small wave 1 down (or A) and did the small wave 2 bounce (or B) and is in the small wave 3 down (or C) right now before the open. It should finish by the close or afterhours I think, possibly tomorrow morning. I say that based on where the RSI is at for the 4hr and 6hr charts, and where they will likely be in the near future.

My guess is that they will be oversold by tomorrow, which should then end the medium B wave down. The medium C up should follow and it should have 5 smaller waves inside it. Of those small waves they could subdivide into tiny waves as this medium C up could take a week or more to finish. You'll notice an inverted head and shoulders pattern now formed as well, which the breakout leg on the upside will the medium C wave. It could go all the way up to near the current high and even hit resistance from the rising purple trendline before it ends... maybe even put in a new high?

It would be perfect to see it run the stops on the bears above the current high and hit the 4580-4600 resistance zone, but on the DOW make a lower high. This would be another divergence between the indexes, as that has already happened once between the SPX and DOW as you can clearly see the DOW topped prior (8/16) to the ES/SPX (9/2), so there's already one divergence in play right now. A second divergence would be very bearish for sure, so if that happens I'll be excited.

For the short term I'd expect today to be under pressure as this is either a small wave 3 down or small wave C... so we'll probably close red. Doesn't mean we won't bounce but I don't see the RSI getting oversold enough today to turn back up. It's pointing down nicely on the 4hr and 6hr charts, and that's strong downward pressure.

As far as downside targets, that 4350's is certainly possible, but I don't see too much more (if that?). Remember that B waves are the tricky ones that are there to trap traders on the wrong side... which in this case the "trap" is for the bears. Don't get married to the downside here.... that's what I'm saying. Have a blessed day.