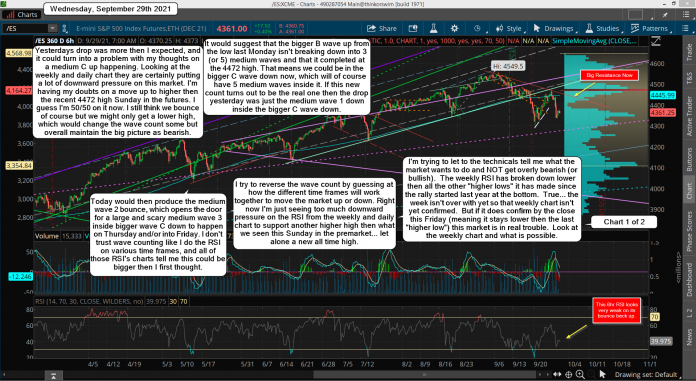 Yesterdays drop was more then I expected, and it could turn into a problem with my thoughts on a medium C up happening. Looking at the weekly and daily chart they are certainly putting a lot of downward pressure on this market. I'm having my doubts on a move up to higher then the recent 4472 high Sunday in the futures. I guess I'm 50/50 on it now. I still think we bounce of course but we might only get a lower high, which would change the wave count some but overall maintain the big picture as bearish.

Today would then produce the medium wave 2 bounce, which opens the door for a large and scary medium wave 3 inside bigger wave C down to happen on Thursday and/or into Friday. I don't trust wave counting like I do the RSI on various time frames, and all of those RSI's charts tell me this could be bigger then I first thought.

I try to reverse the wave count by guessing at how the different time frames will work together to move the market up or down. Right now I'm just seeing too much downward pressure on the RSI from the weekly and daily chart to support another higher high then what we seen this Sunday in the premarket... let alone a new all time high.

I'm trying to let to the technicals tell me what the market wants to do and NOT get overly bearish (or bullish).  The weekly RSI has broken down lower then all the other "higher lows" it has made since the rally started last year at the bottom.  True... the week isn't over with yet so that weekly chart isn't yet confirmed.  But if it does confirm by the close this Friday (meaning it stays lower then the last "higher low") this market is in real trouble.  Look at this chart and what is possible. 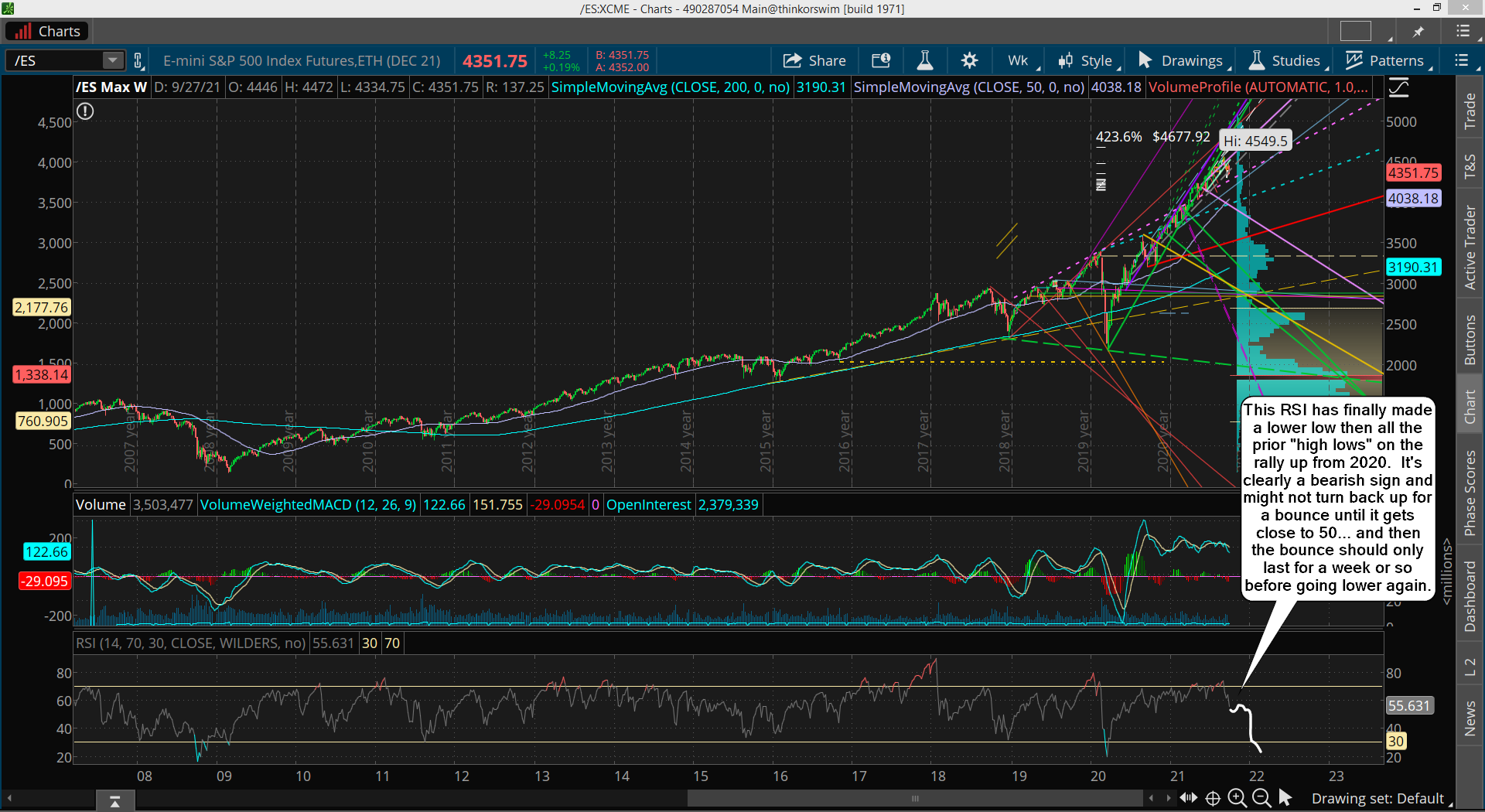 We might hit the 50 level this week or sometime next week.  It should bounce there I'd think but I wouldn't count on more then a one week move back up.  Why?  Because the monthly RSI is rolling over too... and that's really going to put pressure on weekly, daily and everything shorter in time.  Remember that we are in a bearish month now, and October can be bearish too.. at least early into it.  And end of any month (the 4th and 5th week) are commonly the most bearish due to the options expiration being over with in the 3rd week. 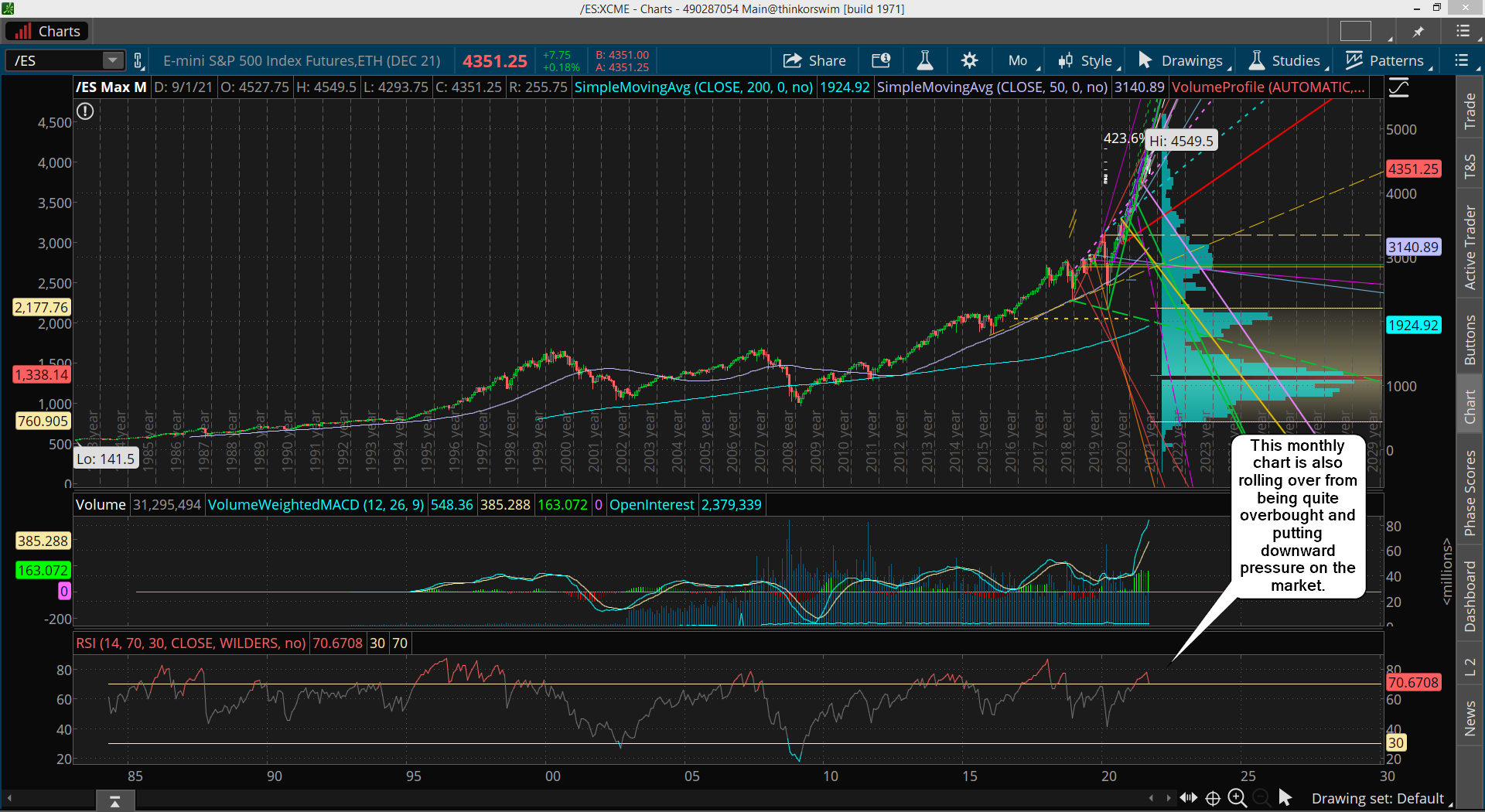 The point I'm making here is that this market is setup from a technical point of view for a surprise crash kind of drop.  I'm not saying it's going to happen.  No one (but insiders) knows the future.  But it has all the ducks lined up in a row, from what I've explained in the technicals with the monthly and weekly chart to the seasonality with the month of September and October.

You'll notice on the monthly chart above the RSI stopped around the 40 level in the 2020 crash, but in the 2000 and 2007 bear markets you can see they both went below 30 with the 2009 low hitting 20 on the RSI.  This is a clear warning to me that the next crash will drop into oversold and NOT be stopped by the FED coming in with massive printing like they did last year.

So I'm torn here with what I see in the technicals and from what Oscar Carboni's OMNI forecasted as a year end target (5400 in case you didn't know).  He's been correct with his OMNI since 2006 he said... and I know from at 2010 when I discovered him that he's telling the truth on it being accurate.

But I don't see that possible if we crash into October, which of course bothers me.  Do I go with the techncials or his OMNI?  I don't know the answer.  I'll just let it play out and try to trade it the best I can.  I will stay that his OMNI had two targets this year. The first upside target was met, so possibly that's all it gets right and the second target is a miss?

The close of this week will give me a huge clue.  If we drop below last Mondays low then we are clearly in trouble.  Bulls MUST hold above it and turn this back up, or otherwise we could see a couple hundred points shaved off this market in a few days... like down to 4000 or more.   I say that because of the fact that it would be a C wave down, which will be larger then the A wave.  That A wave went from 4549 to 4293, which was 256 points.  The C wave could easily do 400 points and not sweat a bit. 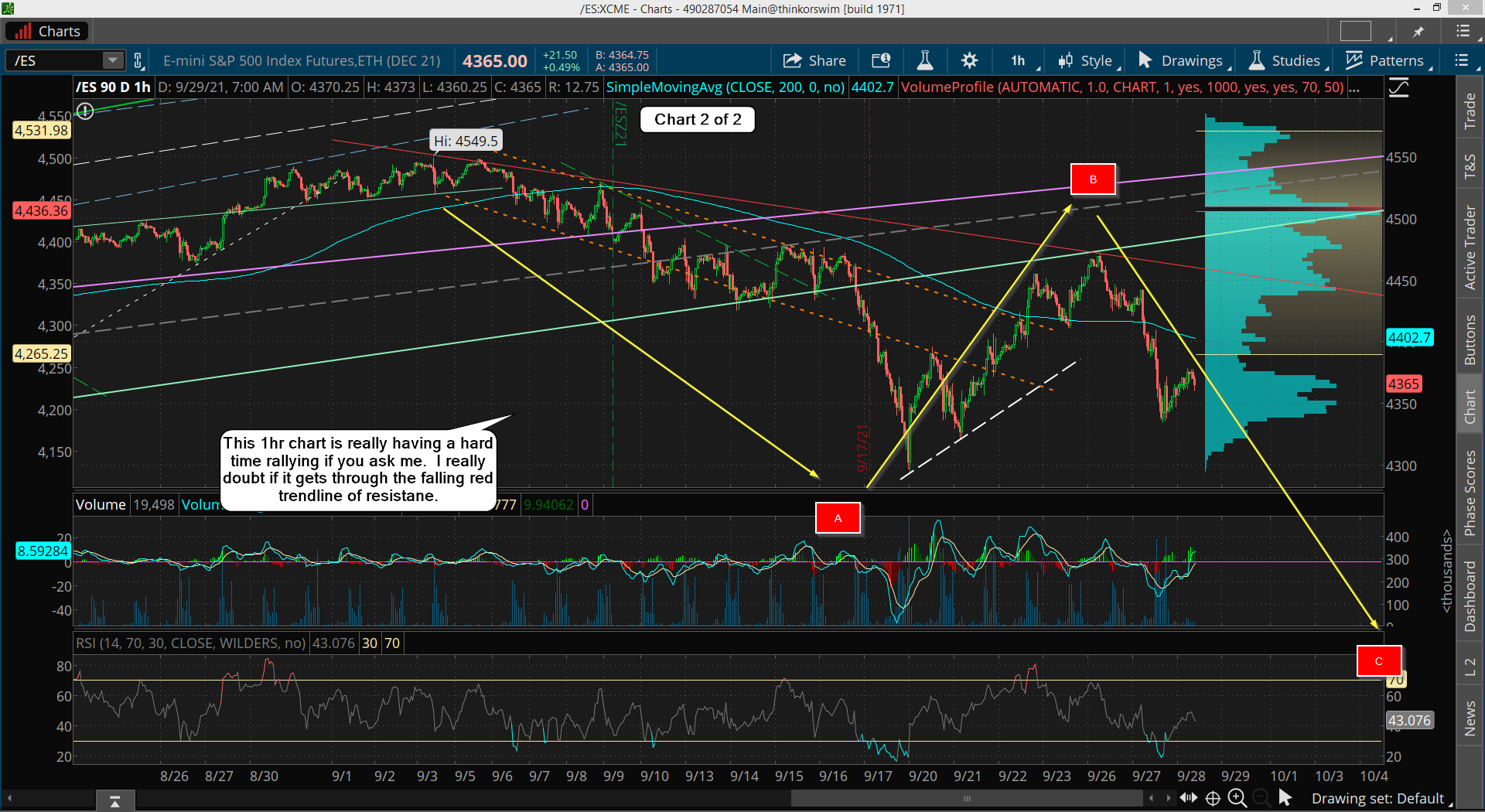 In summery, this market is teetering on the edge of a cliff and could fall apart anytime.  Extreme caution is to be noted here.  I wouldn't dream of taking a long right now.  This is a "short the rip" kind of market right now.  But the "rips" are looking weaker and weaker.  The new falling red trendline I drew is now resistance on the way back up.  I don't know if it gets there or not?  Time will tell.  Have a blessed day.