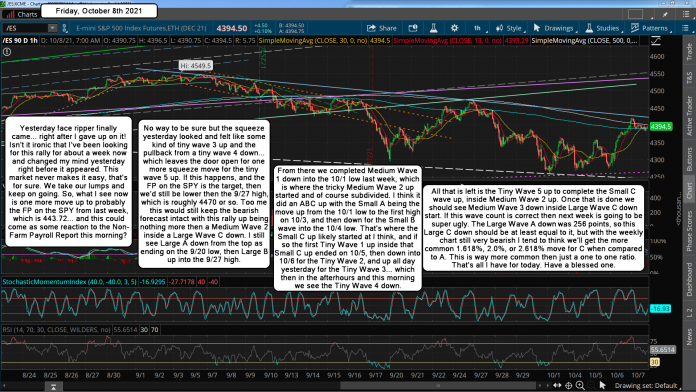 Yesterday face ripper finally came... right after I gave up on it! Isn't it ironic that I've been looking for this rally for about a week now and changed my mind yesterday right before it appeared. This market never makes it easy, that's for sure. We take our lumps and keep on going. So, what I see now is one more move up to probably the FP on the SPY from last week, which is 443.72... and this could come as some reaction to the Non-Farm Payroll Report this morning?

No way to be sure but the squeeze yesterday looked and felt like some kind of tiny wave 3 up and the pullback from a tiny wave 4 down... which leaves the door open for one more squeeze move for the tiny wave 5 up. If this happens, and the FP on the SPY is the target, then we'd still be lower then the 9/27 high, which is roughly 4470 or so. Too me this would still keep the bearish forecast intact with this rally up being nothing more then a Medium Wave 2 inside a Large Wave C down. I still see Large A down from the top as ending on the 9/20 low, then Large B up into the 9/27 high.

From there we completed Medium Wave 1 down into the 10/1 low last week, which is where the tricky Medium Wave 2 up started and of course subdivided. I think it did an ABC up with the Small A being the move up from the 10/1 low to the first high on 10/3, and then down for the Small B wave into the 10/4 low. That's where the Small C up likely started at I think, and if so the first Tiny Wave 1 up inside that Small C up ended on 10/5, then down into 10/6 for the Tiny Wave 2, and up all day yesterday for the Tiny Wave 3... which then in the afterhours and this morning we see the Tiny Wave 4 down.

All that is left is the Tiny Wave 5 up to complete the Small C wave up, inside Medium Wave 2 up. Once that is done we should see Medium Wave 3 down inside Large Wave C down start. If this wave count is correct then next week is going to be super ugly. The Large Wave A down was 256 points, so this Large C down should be at least equal to it, but with the weekly chart still very bearish I tend to think we'll get the more common 1.618%, 2.0%, or 2.618% move for C when compared to A. This is way more common then just a one to one ratio. That's all I have for today. Have a blessed one.