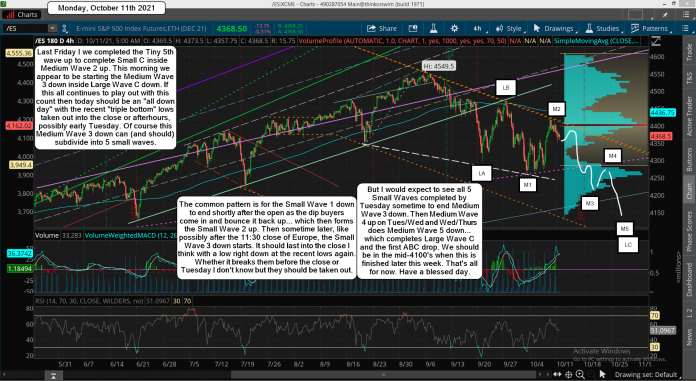 Last Friday I we completed the Tiny 5th wave up to complete Small C inside Medium Wave 2 up. This morning we appear to be starting the Medium Wave 3 down inside Large Wave C down. If this all continues to play out with this count then today should be an "all down day" with the recent "triple bottom" lows taken out into the close or afterhours, possibly early Tuesday. Of course this Medium Wave 3 down can (and should) subdivide into 5 small waves.

The common pattern is for the Small Wave 1 down to end shortly after the open as the dip buyers come in and bounce it back up... which then forms the Small Wave 2 up. Then sometime later, like possibly after the 11:30 close of Europe, the Small Wave 3 down starts. It should last into the close I think with a low right down at the recent lows again. Whether it breaks them before the close or Tuesday I don't know but they should be taken out.

But I would expect to see all 5 Small Waves completed by Tuesday sometime to end Medium Wave 3 down. Then Medium Wave 4 up on Tues/Wed and Wed/Thurs does Medium Wave 5 down... which completes Large Wave C and the first ABC drop. We should be in the mid-4100's when this is finished later this week. That's all for now. Have a blessed day.