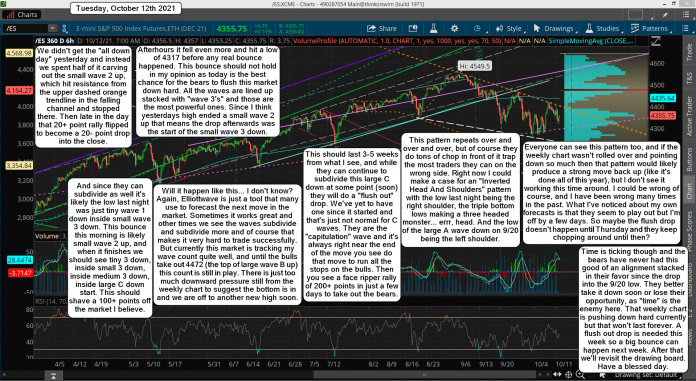 We didn't get the "all down day" yesterday and instead we spent half of it carving out the small wave 2 up, which hit resistance from the upper dashed orange trendline in the falling channel and stopped there. Then late in the day that 20+ point rally flipped to become a 20- point drop into the close.

Afterhours it fell even more and hit a low of 4317 before any real bounce happened. This bounce should not hold in my opinion as today is the best chance for the bears to flush this market down hard. All the waves are lined up stacked with "wave 3's" and those are the most powerful ones. Since I think yesterdays high ended a small wave 2 up that means the drop afterwards was the start of the small wave 3 down.

Will it happen like this... I don't know? Again, Elliottwave is just a tool that many use to forecast the next move in the market. Sometimes it works great and other times we see the waves subdivide and subdivide more and of course that makes it very hard to trade successfully. But currently this market is tracking my wave count quite well, and until the bulls take out 4472 (the top of large wave B up) this count is still in play. There is just too much downward pressure still from the weekly chart to suggest the bottom is in and we are off to another new high soon.

This should last 3-5 weeks from what I see, and while they can continue to subdivide this large C down at some point (soon) they will do a "flush out" drop. We've yet to have one since it started and that's just not normal for C waves. They are the "capitulation" wave and it's always right near the end of the move you see do that move to run all the stops on the bulls. Then you see a face ripper rally of 200+ points in just a few days to take out the bears. 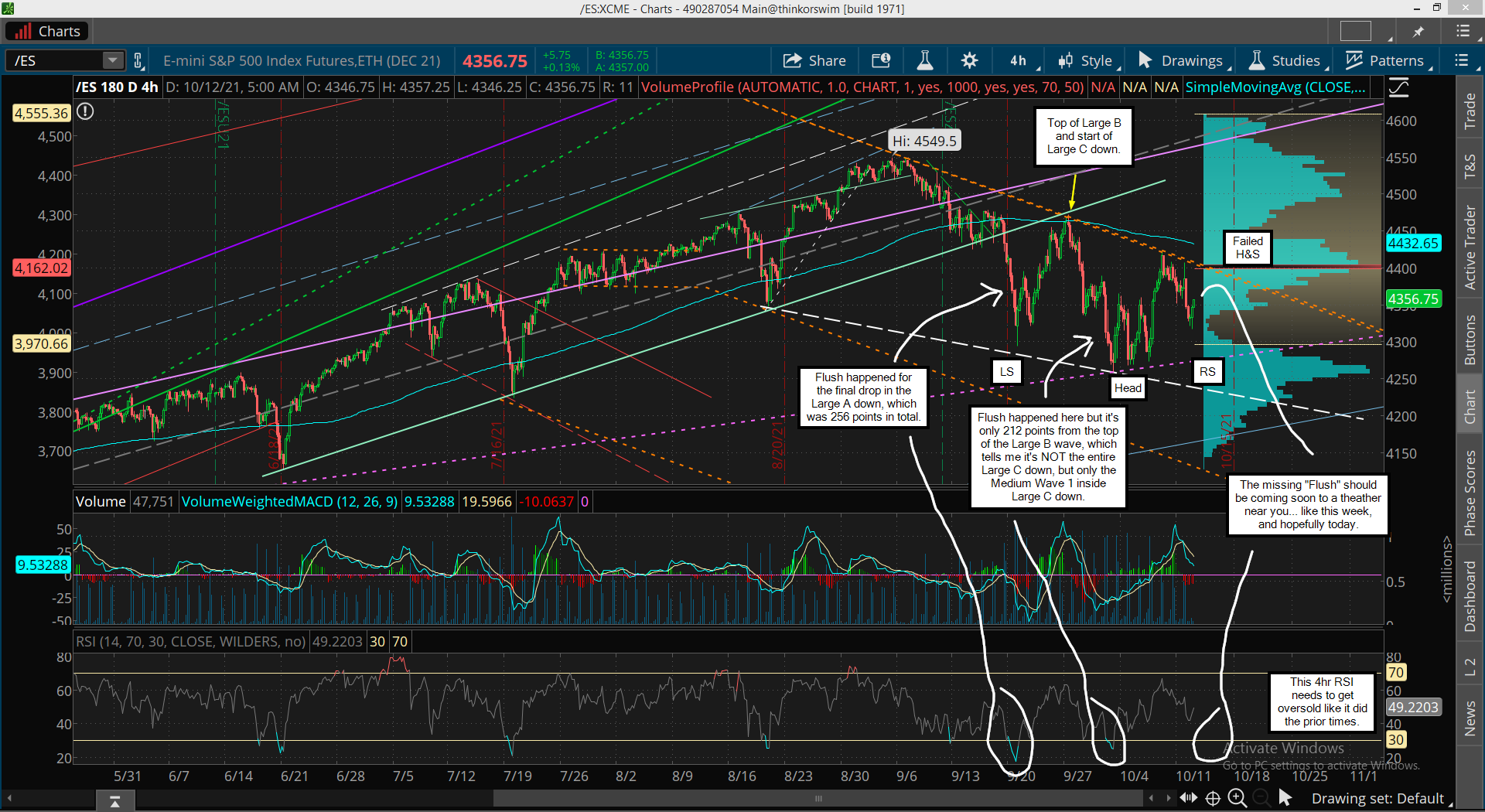 This pattern repeats over and over and over, but of course they do tons of chop in front of it trap the most traders they can on the wrong side. Right now I could make a case for an "Inverted Head And Shoulders" pattern with the low last night being the right shoulder, the triple bottom lows making a three headed monster... errr, head. And the low of the large A wave down on 9/20 being the left shoulder.

Everyone can see this pattern too, and if the weekly chart wasn't rolled over and pointing down so much then that pattern would likely produce a strong move back up (like it's done all of this year), but I don't see it working this time around. I could be wrong of course, and I have been wrong many times in the past. What I've noticed about my own forecasts is that they seem to play out but I'm off by a few days. So maybe the flush drop doesn't happen until Thursday and they keep chopping around until then?

Time is ticking though and the bears have never had this good of an alignment stacked in their favor since the drop into the 9/20 low. They better take it down soon or lose their opportunity, as "time" is the enemy here. That weekly chart is pushing down hard currently but that won't last forever. A flush out drop is needed this week so a big bounce can happen next week. After that we'll revisit the drawing board. Have a blessed day.