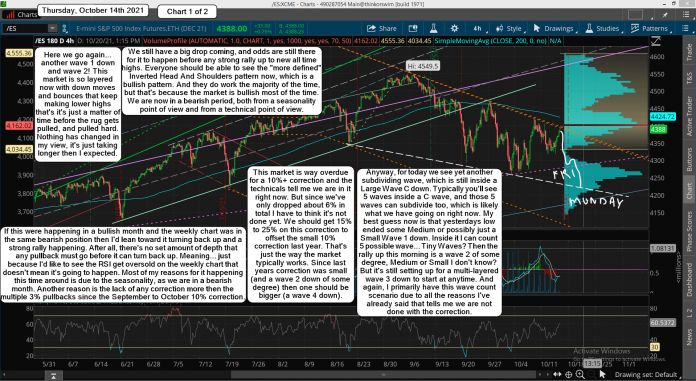 Here we go again... another wave 1 down and wave 2! This market is so layered now with down moves and bounces that keep making lower highs that's it's just a matter of time before the rug gets pulled, and pulled hard. Nothing has changed in my view, it's just taking longer then I expected.

We still have a big drop coming, and odds are still there for it to happen before any strong rally up to new all time highs. Everyone should be able to see the "more defined" Inverted Head And Shoulders pattern now, which is a bullish pattern. And they do work the majority of the time, but that's because the market is bullish most of the time. We are now in a bearish period, both from a seasonality point of view and from a technical point of view.

If this were happening in a bullish month and the weekly chart was in the same bearish position then I'd lean toward it turning back up and a strong rally happening. After all, there's no set amount of depth that any pullback must go before it can turn back up. Meaning... just because I'd like to see the RSI get oversold on the weekly chart that doesn't mean it's going to happen. Most of my reasons for it happening this time around is due to the seasonality, as we are in a bearish month. Another reason is the lack of any correction more then the multiple 3% pullbacks since the September to October 10% correction.

This market is way overdue for a 10%+ correction and the technicals tell me we are in it right now. But since we've only dropped about 6% in total I have to think it's not done yet. We should get 15% to 25% on this correction to offset the small 10% correction last year. That's just the way the market typically works. Since last years correction was small (and a wave 2 down of some degree) then one should be bigger (a wave 4 down).

Anyway, for today we see yet another subdividing wave, which is still inside a Large Wave C down. Typically you'll see 5 waves inside a C wave, and those 5 waves can subdivide too, which is likely what we have going on right now. My best guess now is that yesterdays low ended some Medium or possibly just a Small Wave 1 down. Inside it I can count 5 possible wave... Tiny Waves? Then the rally up this morning is a wave 2 of some degree, Medium or Small I don't know? But it's still setting up for a multi-layered wave 3 down to start at anytime. And again, I primarily have this wave count scenario due to all the reasons I've already said that tells me we are not done with the correction. 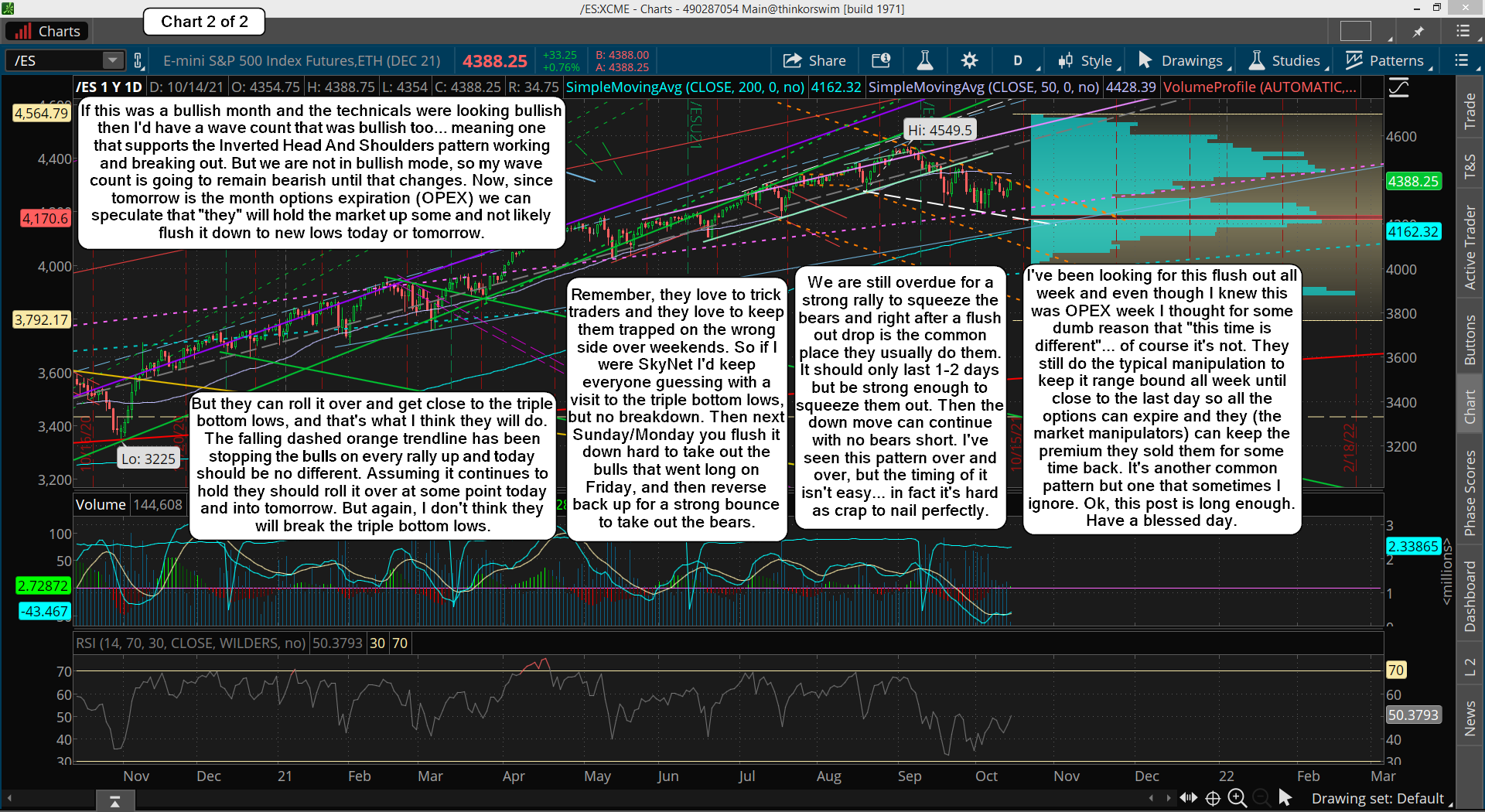 If this was a bullish month and the technicals were looking bullish then I'd have a wave count that was bullish too... meaning one that supports the Inverted Head And Shoulders pattern working and breaking out. But we are not in bullish mode, so my wave count is going to remain bearish until that changes. Now, since tomorrow is the month options expiration (OPEX) we can speculate that "they" will hold the market up some and not likely flush it down to new lows today or tomorrow.

But they can roll it over and get close to the triple bottom lows, and that's what I think they will do. The falling dashed orange trendline has been stopping the bulls on every rally up and today should be no different. Assuming it continues to hold they should roll it over at some point today and into tomorrow. But again, I don't think they will break the triple bottom lows.

Remember, they love to trick traders and they love to keep them trapped on the wrong side over weekends. So if I were SkyNet I'd keep everyone guessing with a visit to the triple bottom lows, but no breakdown. Then next Sunday/Monday you flush it down hard to take out the bulls that went long on Friday, and then reverse back up for a strong bounce to take out the bears.

We are still overdue for a strong rally to squeeze the bears and right after a flush out drop is the common place they usually do them. It should only last 1-2 days but be strong enough to squeeze them out. Then the down move can continue with no bears short. I've seen this pattern over and over, but the timing of it isn't easy... in fact it's hard as crap to nail perfectly.

I've been looking for this flush out all week and even though I knew this was OPEX week I thought for some dumb reason that "this time is different"... of course it's not. They still do the typical manipulation to keep it range bound all week until close to the last day so all the options can expire and they (the market manipulators) can keep the premium they sold them for some time back. It's another common pattern but one that sometimes I ignore. Ok, this post is long enough. Have a blessed day.