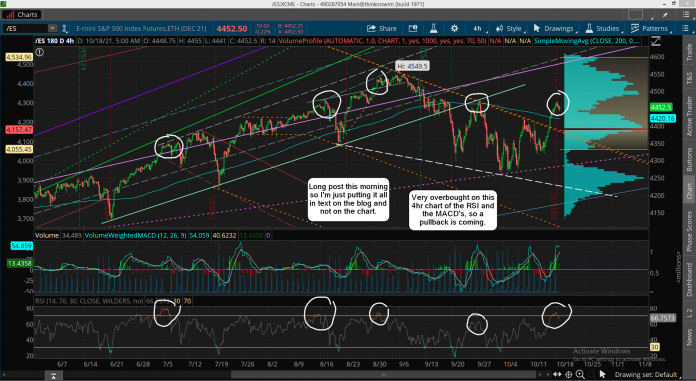 The window of opportunity for the bears to drop this market hard has now passed in my opinion. The month of September and early October was where they had the Seasonality in their favor, but last week we saw the bulls hold the triple bottom low around 4270 and breakout of the falling trendline of resistance. It was pretty much non-stop on the upside after Wednesday and was obviously a wave 3 up of some degree.

The "Inverted Head And Shoulders" pattern is now "in play" and if it pulls back some early this week to retest the falling trendline I think the next move up could be a real screamer. I say that because of the weekly RSI turning back up now and the Seasonality for early November being very bullish. Both November and December are bullish but early in November is the most, and if you add that weekly RSI turning you have good odds for another strong move happening after the pullback is finished by the end of this month.

They won't make it super easy as I've described here as we all know you can't turn a ship on a dime. Meaning that even-though the weekly chart is turning back, which should support multi-month rally, the daily is mixed and even more important is the monthly... which is in a "topping phase" currently.

What does that mean you ask? It means the non-stop rally that we had all of 2021 isn't likely to happen next year.

That monthly is tired and while we will still likely go higher into the end of this year I do not see it doing another repeat of this year with strong pushes up and small pullbacks of only 3%, then up again. Basically this year (and last year, from the lows) was say 80% of the move, and this last 20% is going to be choppy and hard to trade. For the short term I see pullback to the falling trendline and then back up with a double top very possible. I'm not sure if it starts today or not as typically after a strong multi-day rally you see a tiny pullback then one more push back up. 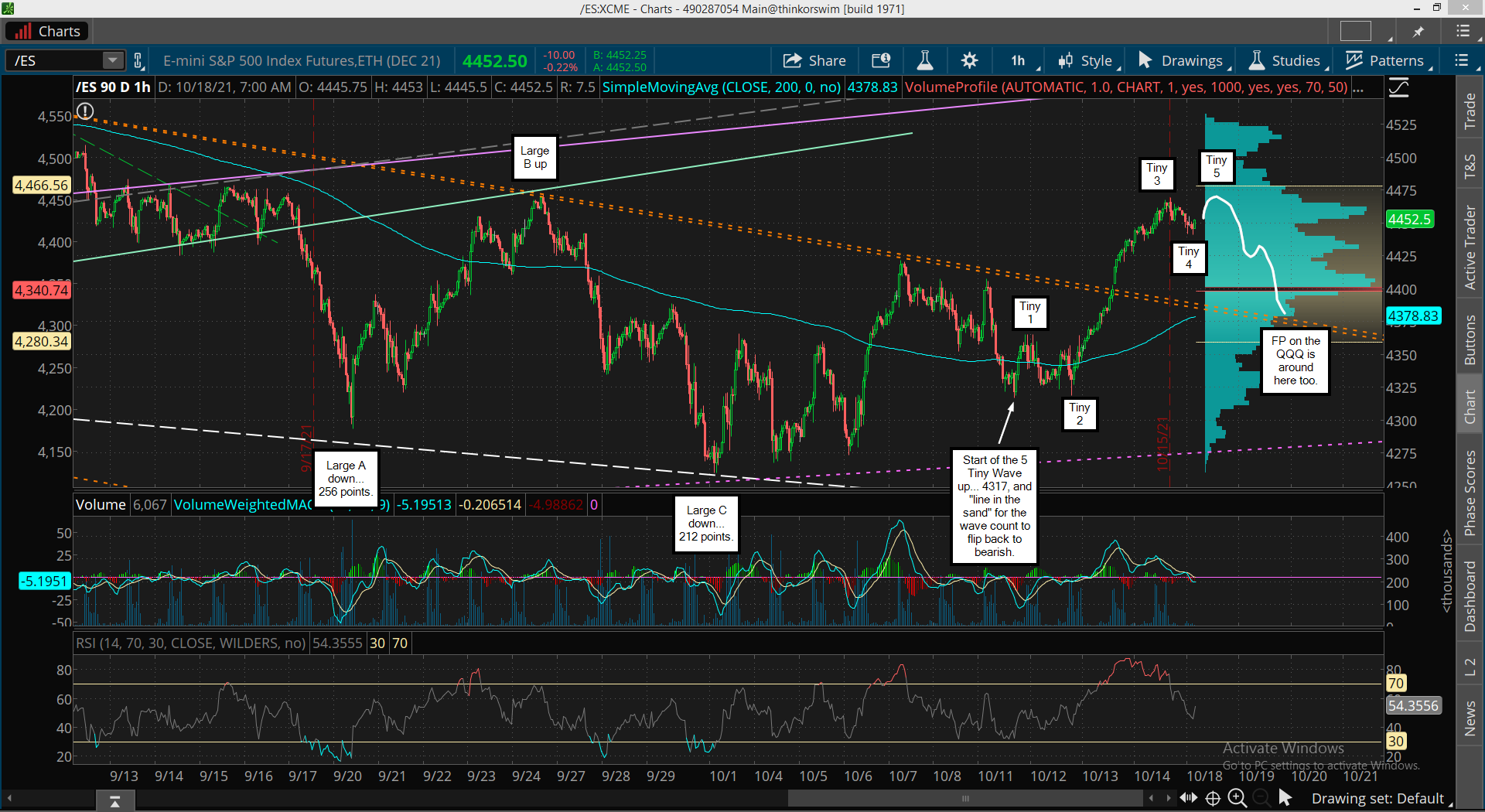 After that we should see an ABC down to that falling trendline, so that might take 2-3 days or they could chop around for awhile and drag it out into the end of this month as then they would put in a low right before the start of November where the bullish Seasonality kicks in full force. Hard to say for sure as we all know how hard the bulls fight to "hold the line" before they finally give in and allow a pullback of any decent size to happen. I'm just going to watch and wait for the tiny 4 down and tiny 5 up to finish, and then I'll see if there's a short opportunity forming with some short term overbought charts. Have a blessed day. 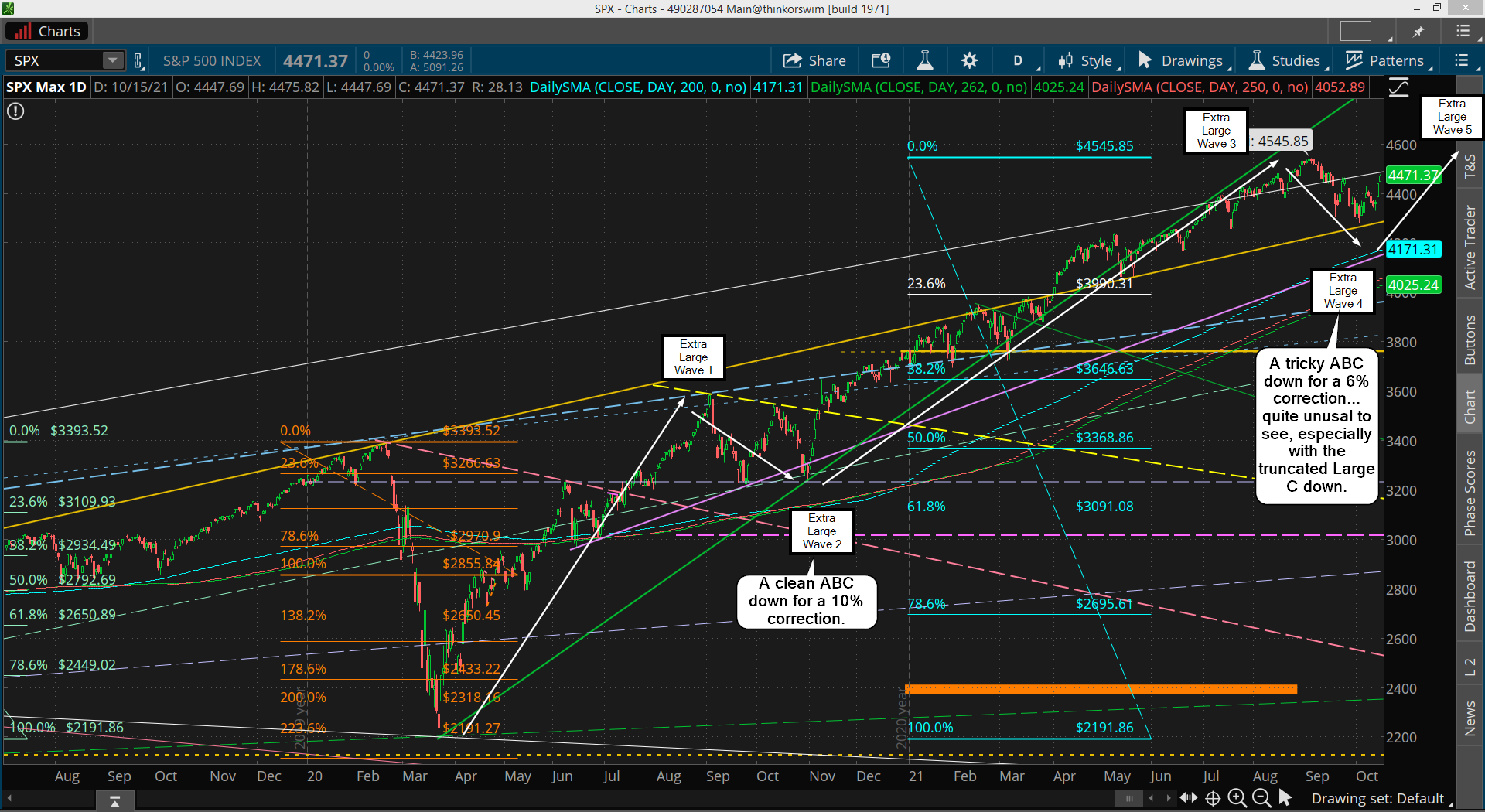 That C wave was only 212 points, which has been my entire argument for a move lower as it is not a normal length as usually the C wave are longer then the A waves, or at least equal. So of course I keep looking for this C wave to go make another lower low and I would still be looking for that to happen if the bulls didn't breakthrough the falling trendline, and if we were still in the bearish Seasonality period. But that window has passed now and the trendline was broken through. Therefore I have no choice but to accept the "truncated" (shorter) C wave down as being "complete" and the entire ABC being complete as well.

The only thing that would make that change, (meaning we'd be back to looking for another lower low and the C wave to subdivide) would be if the start of the tiny wave 1 up at 4317 on 10/12 is taken out. I don't see it happening but if it does then the bears are back in the game again. Currently though I'm viewing the Extra Large Wave 4 down as now being finished. The Extra Large Wave 2 down was the ABC correction of 10% last year between September and October.

This Wave 4 was only 6% and is a true mystery for me as usually if you see a small Wave 2 the Wave 4 is big, and vice versus... and I think last years 10% was small, but Mr. Market must not have I guess. It means we are starting our last big move up, the Extra Large Wave 5, which can go any length really. It could just reach a double top at 4549, truncate short with a lower high, or rally for another year to hit 6000+... who knows?

I had hoped for a nice 15-20% correction here, as then there would be tons of bears shorting every move back up, which would be fuel to reach those crazy high levels of 5400+ like Oscar's OMNI forecasted. But with only a 6% correction I fear too many traders are still mega-bulls here and it's hard to rally up with everyone long.

You need shorts to squeeze, and there's not many around currently. So I don't think now that we'll reach Oscars target by the end of this year. But I do think we'll put in a new all time high... it just isn't likely to be as high as everyone was thinking. This again is due to the lack of any deep correction. Now this bull is going to climb the last 20% of this mountain with a ton of weight on his shoulders from all the traders still super long.

In conclusion, as frustrating as it has been, odds are pretty good that the correction is done and we are going to go up into the rest of the year but with many more pullbacks and at a slower pace (again, due to everyone still long). How high we go is unknown but I'll be on the lookout for the Seasonality weakness to appear again in the months of January to March, which is where the bears get another chance for that 15-20% correction. 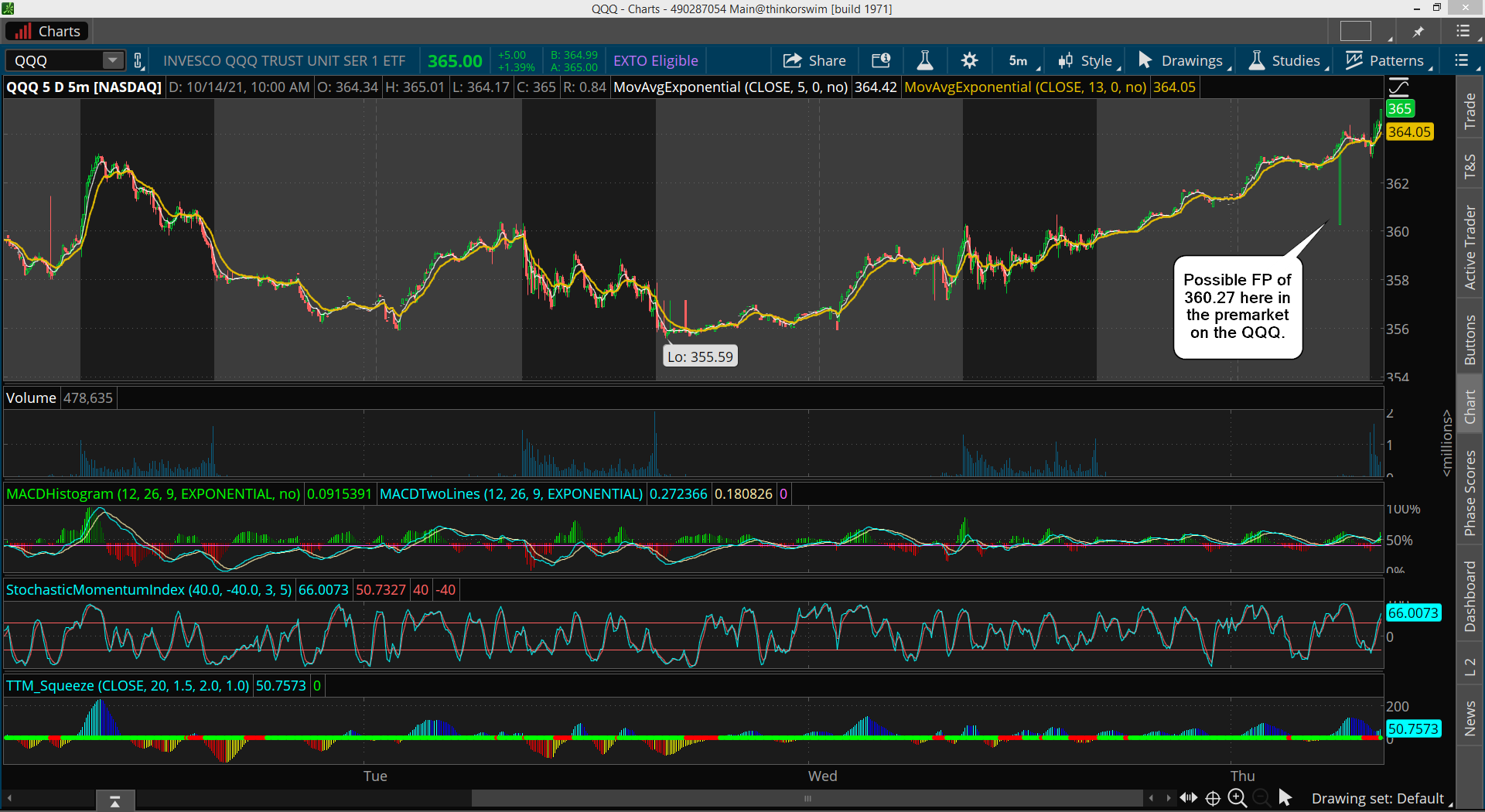 One last thing, this FP I found on the QQQ's is a gap fill basically and would be a backtest on the falling trendline that I drew on the ES chart, which is roughly the same on the QQQ and NDX.  The market is higher now then when I took that screenshot but that FP is still there.