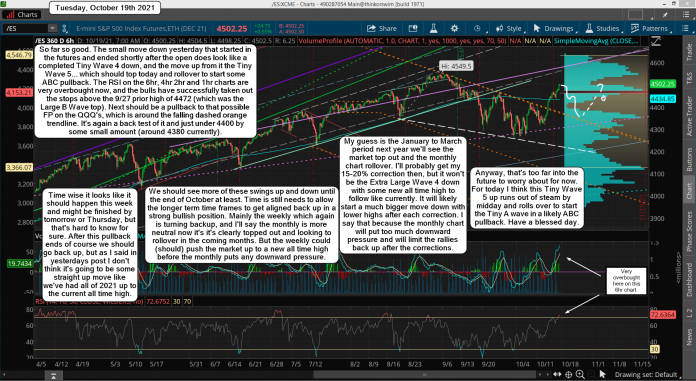 So far so good. The small move down yesterday that started in the futures and ended shortly after the open does look like a completed Tiny Wave 4 down, and the move up from it the Tiny Wave 5... which should top today and rollover to start some ABC pullback. The RSI on the 6hr, 4hr 2hr and 1hr charts are very overbought now, and the bulls have successfully taken out the stops above the 9/27 prior high of 4472 (which was the Large B Wave top). Next should be a pullback to that possible FP on the QQQ's, which is around the falling dashed orange trendline. It's again a back test of it and just under 4400 by some small amount (around 4380 currently).

Time wise it looks like it should happen this week and might be finished by tomorrow or Thursday, but that's hard to know for sure. After this pullback ends of course we should go back up, but as I said in yesterdays post I don't think it's going to be some straight up move like we've had all of 2021 up to the current all time high.

We should see more of these swings up and down until the end of October at least. Time is still needs to allow the longer term time frames to get aligned back up in a strong bullish position. Mainly the weekly which again is turning backup, and I'll say the monthly is more neutral now it's it's clearly topped out and looking to rollover in the coming months. But the weekly could (should) push the market up to a new all time high before the monthly puts any downward pressure.

My guess is the January to March period next year we'll see the market top out and the monthly chart rollover. I'll probably get my 15-20% correction then, but it won't be the Extra Large Wave 4 down with some new all time high to follow like currently. It will likely start a much bigger move down with lower highs after each correction. I say that because the monthly chart will put too much downward pressure and will limit the rallies back up after the corrections.

Anyway, that's too far into the future to worry about for now. For today I think this Tiny Wave 5 up runs out of steam by midday and rolls over to start the Tiny A wave in a likely ABC pullback. Have a blessed day.