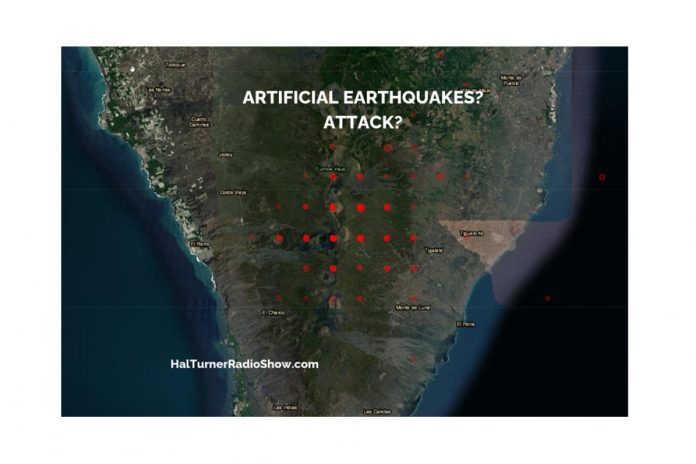 Note: I probably won't do any update on Monday.

We got a new high on the ES but just barely, so it's not exactly what I'd call a "blow off top" move. Regardless, a move down is coming this week. We should drop back to the FP on QQQ of 360.27 from 10/14, which is around 4366 on the ES with the current ratio between the close price of both of them on Friday. Once that low is in, which should be near the end of this week, I'll look for a strong rally back up with 4600+ as very likely.

Basically, the move down will be a wave 2 of some degree with the wave 1 up being from the 4260 low to the current all time high. This will also make a right shoulder for an "Inverted Head And Shoulders" pattern. I've spoke of this before but it's becoming more likely now then ever. The move up after the pullback would be a strong wave 3 of some degree, then a 4 and an 5 to complete the pattern. 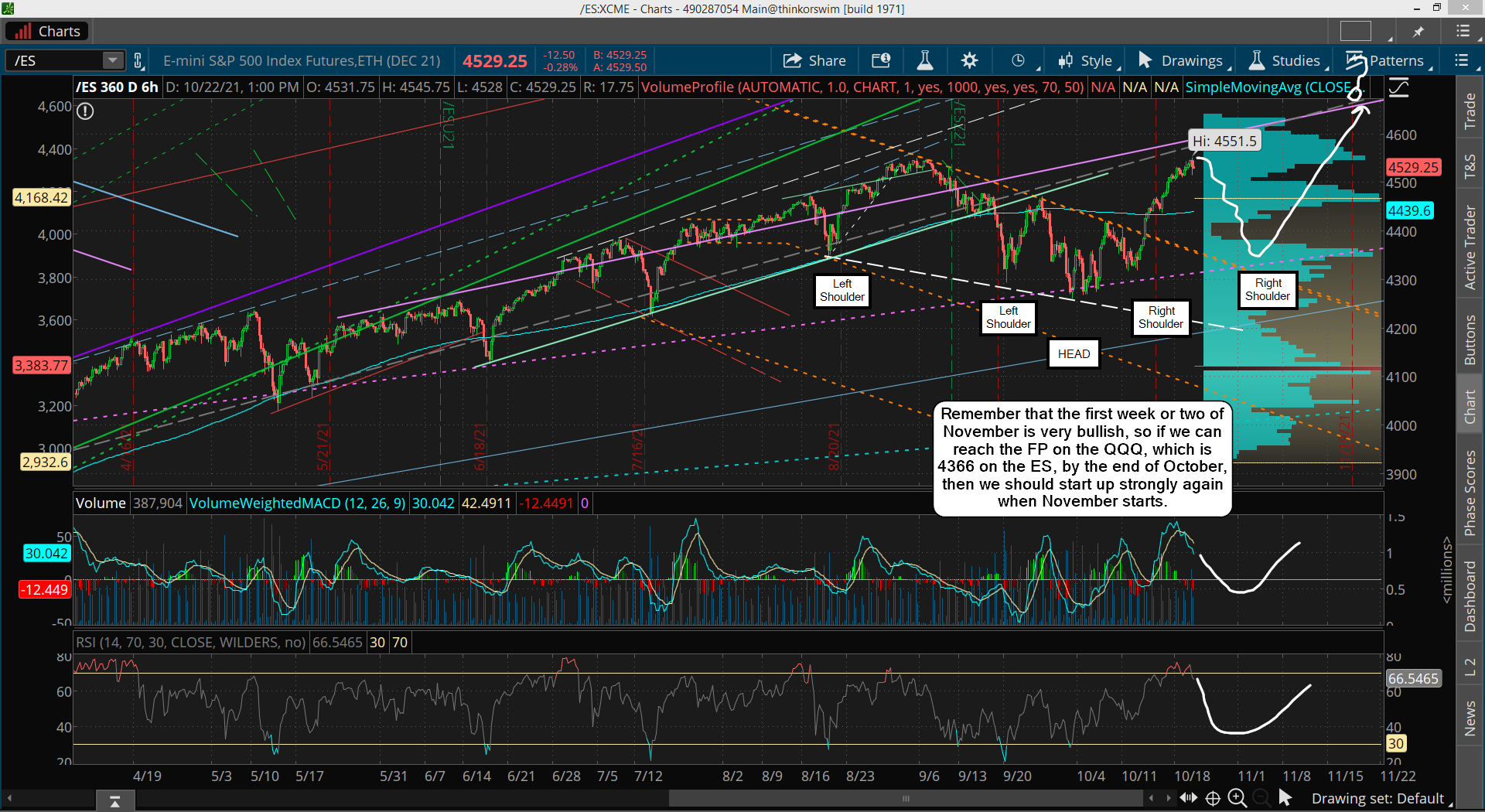 While I don't know for sure how high this last Extra Large Wave 5 will go up, it could end at 4600+ with just one series of 5 waves. It doesn't have to subdivide with a 5 waves series to make the first wave, then a 3 waves series down for the second wave, 5 again for the third... you get the picture. If we get a 5 series up, then 3 down, 5 up again, 3 down and another last 5 up again that entire 5 wave series could put the market up at 5000 or 6000 into sometime next year.

But if we only get one 5 wave series up then this final Extra Large Wave 5 could end this November. I know everyone is looking for that super high level to try and short the big crash from but we might not get it? From a technical point of view the bearish levels right now are LOWER then the February 2020 top.

That doesn't mean they can't continue to go lower but it's super hard for the market to climb up without bears to squeeze. Basically it puts it all on the Fed's to buy ALL of the market to keep it going up, and while I guess they could do that it's not their normal pattern. Usually the Fed will allow the drops to happen to get bears short, and then the squeeze can rally the market with the Fed only putting in a much smaller percentage to keep the rally going.

There's really no way to know for sure how high the Fed's can push the market up but at some point (when everyone is long) they just can't push it anymore. My point is that without some deeper pullback to increase the bearish levels back up the odds of some 5000+ rally are very slim in my opinion. I mentioned before that it was possible that the 6% drop for the Extra Large Wave 4 correction might subdivide into that first ABC drop, then some ABC rally back up for a lower high, and another ABC drop to possible extend it to 7% (or a little more?) in total.

But I think that scenario is dead now I think, as we've hit a new all time high on ES/SPX, YM/DOW and will probably hit one on the NQ/NDX at some point soon. I'm going to stick with that 6% correction being finished now and from that low of 4260 we've started the Extra Large Wave 5 up. And as I've discussed here there's no way to know how high or how long this final wave 5 up can go.

With the low on 10/1 and the current high marking the wave 1 we have about 3 weeks in total. The wave 2 down should end by this Friday, so that's 1 week, and next would be the wave 3 up which I think will be shorter in time due to it being the most powerful wave up... so I'm thinking 2 weeks for it. You can look at the start of the wave 1 up from 10/1 to see that it struggled for a week before it broke out and got going.

So really it was around 2 weeks long after that, and that should be about the same for the wave 3 up as it should NOT have to struggle after it bottoms late this week and starts up next week. It will run fast I think, as history tells me that. Then there's the wave 4 pullback and wave 5 up to follow, which history tells that that wave 2's and 4's alternate in depth and pattern... but time as well.

Since I think the drop this week we be a 50-60% pullback of the wave 1 up, with a 4260's area low expected, the wave 4 should be a shallow one and short in time as well. My thoughts are that the wave 4 pullback (which should be sometime early in November) and the wave 5 up should both be done in about a week. This all points to a top in mid-November to complete the first 5 wave series up.

The big question at that point will be... "Did that complete the Extra Large Wave 5 up or will it subdivide?", and I can't answer that question right now of course. But when we get there if I see the bearish levels even lower then right now I'll be force to take a shot at a short. After all, even if it subdivides the move down from this 4600+ top of the first 5 wave series should give me another 50% (or more) retrace of that entire move. So from 4260 to say 4650 you'd probably get a 200+ point pullback if this last Extra Large Wave 5 up is going to subdivide? But it's finished then the top is "in" for the entire move up from the 2020 low and the "pullback" from that kind of move is going to be HUGE! Basically it would be the crash style move everyone is waiting to short, but from a much higher level up over 5000 or 6000 next year.

We'll all noticed on the news that there's an unusual amount of Fed people retiring... from Fed Governess to other officials at various levels. We also know they are all crooked and make money from the stock market with their personal accounts while they pump the market up with stimulus money. It's called "insider trading" but of course no one will arrest them for it as they are all to powerful.

Maybe it's because they are all getting caught for insider trading as some articles suggest, or maybe it's because they know the TOP in the market "in" (or almost "in"). They are all like rats fleeing a sinking ship it seems as I really doubt if they are worried about being investigated for insider trading... after all, they've been doing it all their lives and are too well connected to go to jail. No, I think they know the market is doomed and they are cashing out and leaving before the crap hits the fan.

Here's are some links about the Fed Officials stepping down, but I wouldn't get caught up in al the drama in these articles. Just remember that they NEVER go to jail, so stepping down now has NOTHING to do with getting caught for insider trading. 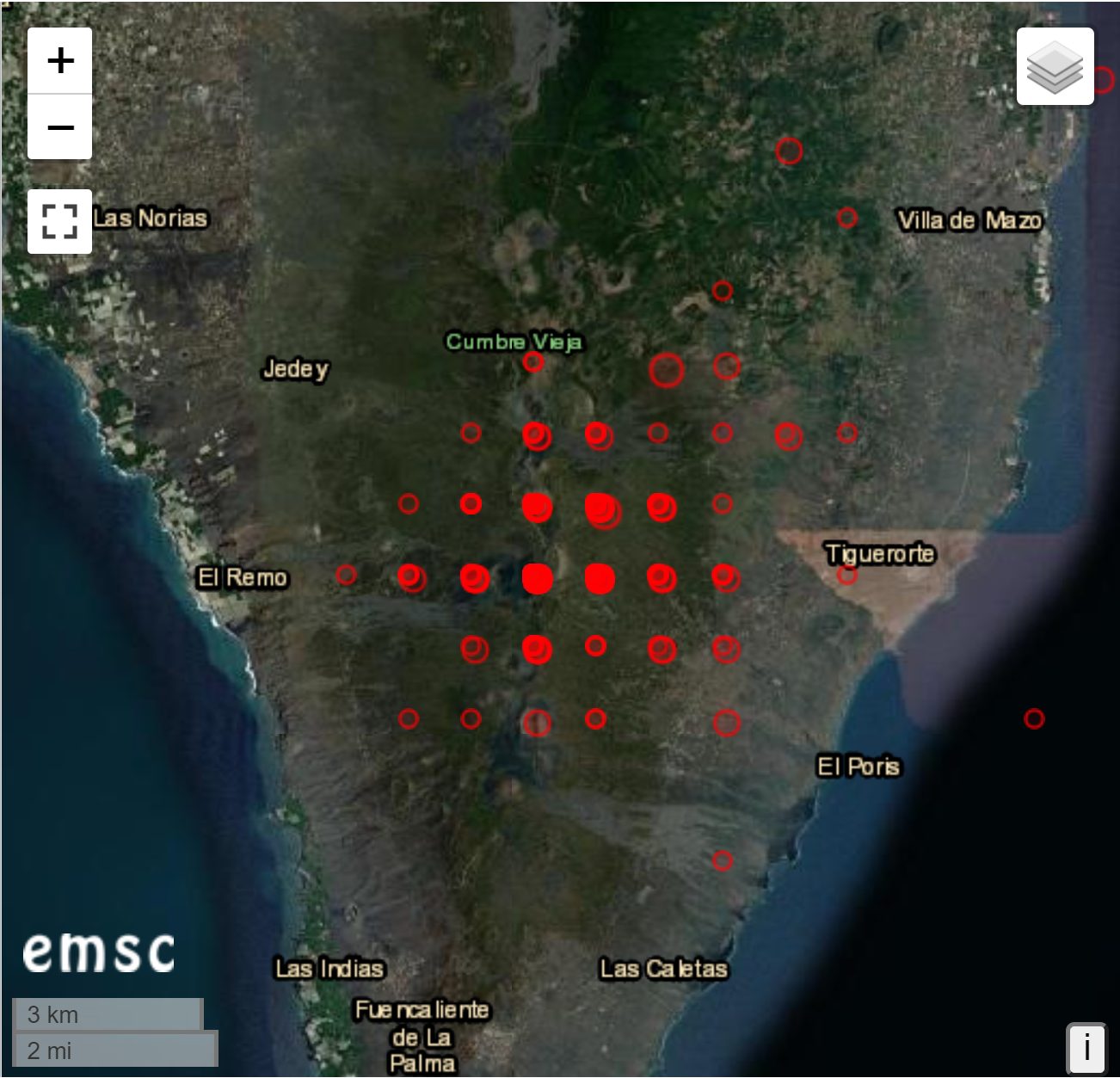 Over the weekend I stumbled upon this article that I found quite scary due to the timing of it possibly lining up with a top in the stock market next month. There's no way to know for sure of course but I do know that the deep state uses weather weapons to attack its enemy, and in this case the enemy would be the American people.

It's a known fact that the vaccines are poison and are killing millions of Americans right now, but they aren't fulfilling thier goal I assume to kill off 95% of the worlds population. So they have a backup plan it seems and that is to use HAARP to attack an island full of volcano's so they will erupt and cause the island to drop into the sea... which then will cause a 100+ foot tsunami to hit the east coast of American and kill 65 million people (that's the figures FEMA estimated).

This article below was just put out this weekend and shows clearly that this is an attack and NOT some natural occurrence. For those of you that remember the tsunami that hit Japan on March 11th, 2011 you'll remember that it too was NOT natural. The deep state used HAARP back then to attack Japan with a tsunami and cause Fukushima to erupt. At the time I didn't know why they did it but some later period I had seen an article about Japan coming out with cars that ran on water or something like that... can't remember for sure?

It could have been cars that get 200-300 miles per gallon on gasoline, but I think it was water powered cars. Obviously this would crush the control the deep state has on the world with oil and the US Dollar being the reserve for the world, so Japan was attacked to stop it from coming out.

I probably wrote something about it on this blog back then but I don't have time to go search for it... and it's not important anyway. What "IS" important now is that the deep state is at it again, only this time they plan to kill Americans living on the East Coast it seems. Now I certainly do not know if this is going to happen or not (I pray it doesn't of course) but if they keep attacking those volcano's on this island of Santa Cruz then it's only a matter of time before huge land masses do breakoff and falling into the sea.

My question is... are they planning for this to happen right as the stock market tops next month? Possibly is my answer. Call this conspiracy theory if you like but you can clearly see in this article by Hal Turner that whatever is attacking those volcano's isn't from nature and "IS" man-made.

Currently we have record lows in the number of bears short, and it's lower then the February 2020 high. We will be entering a very bullish period after this month ends as both November and December has their Seasonality patterns as super strong... therefore surprise drops will be viewed by most traders as "buy the dip" opportunities.

This opens the door for a much larger drop then normal. Two possibilities are in play right now... ONE is the 5 wave series up is just a wave 1 inside a bigger 5 wave series inside this Extra Large Wave 5 up that could take a year to play out. If this is correct then the 4600+ top expected in mid-November should produce a wave 2 down of around 50% of the wave 1 up from the 4260 low... then wave 3 up starts in December and carries us into January/February with some likely 5000+ target.

Or TWO the 5 wave series does NOT subdivide and completes the Extra Large Wave 5 up and the market puts in the top of the entire rally up from the 2020 lows. This opens the door for a very large drop the second half of November, which could become a crash if the deep state really is planning on creating a tsunami to hit the east coast of America.

Otherwise the drop would still be a big one as even a small 38.2% Fibonacci retracement down would be huge in points. If we top at say 4700 then that would takes us to 3750 roughly... a huge and scary drop for sure. Ok, I think I covered everything. Let's pray for the failure of the evil ones and the best for humanity. Have a blessed week.

Below is a chart I shared in the chart room on Friday. So we could see 377.55 hit Monday before the market rolls over. 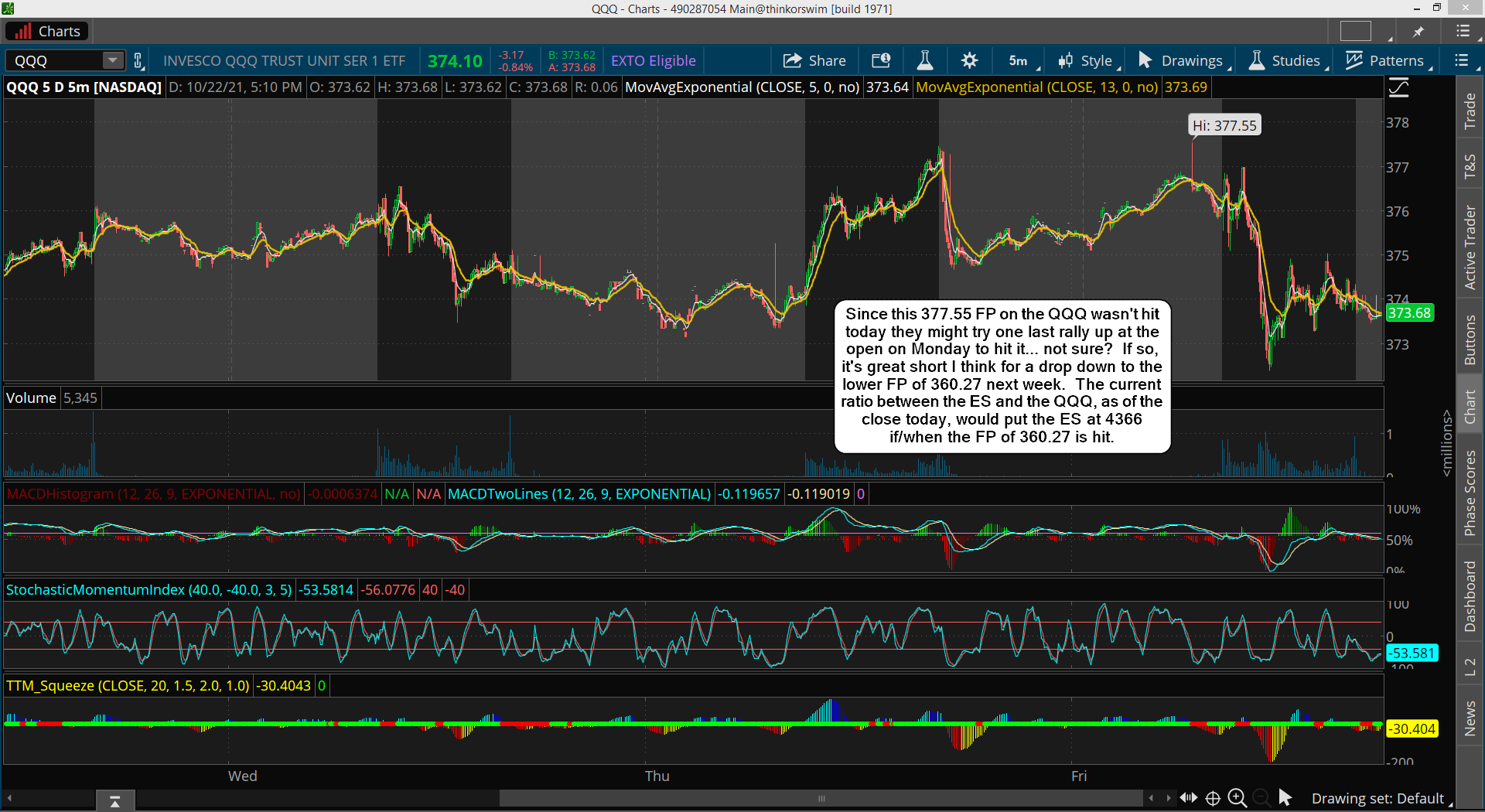