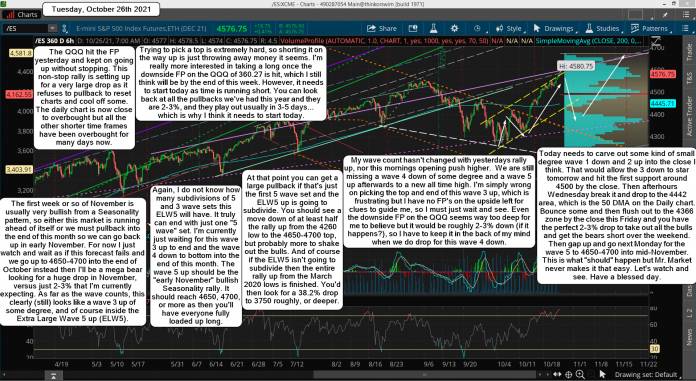 The QQQ hit the FP yesterday and kept on going up without stopping. This non-stop rally is setting up for a very large drop as it refuses to pullback to reset charts and cool off some. The daily chart is now close to overbought but all the other shorter time frames have been overbought for many days now.

Trying to pick a top is extremely hard, so shorting it on the way up is just throwing away money it seems. I'm really more interested in taking a long once the downside FP on the QQQ of 360.27 is hit, which I still think will be by the end of this week. However, it needs to start today as time is running short. You can look back at all the pullbacks we've had this year and they are 2-3%, and they play out usually in 3-5 days... which is why I think it needs to start today.

The first week or so of November is usually very bullish from a Seasonality pattern, so either this market is running ahead of itself or we must pullback into the end of this month so we can go back up in early November. For now I just watch and wait as if this forecast fails and we go up to 4650-4700 into the end of October instead then I'll be a mega bear looking for a huge drop in November, versus just 2-3% that I'm currently expecting. As far as the wave counts, this clearly (still) looks like a wave 3 up of some degree, and of course inside the Extra Large Wave 5 up (ELW5).

Again, I do not know how many subdivisions of 5 and 3 wave sets this ELW5 will have. It truly can end with just one "5 wave" set. I'm currently just waiting for this wave 3 up to end and the wave 4 down to bottom into the end of this month. The wave 5 up should be the "early November" bullish Seasonality rally. It should reach 4650, 4700, or more as then you'll have everyone fully loaded up long.

At that point you can get a large pullback if that's just the first 5 wave set and the ELW5 up is going to subdivide. You should see a move down of at least half the rally up from the 4260 low to the 4650-4700 top, but probably more to shake out the bulls. And of course if the ELW5 isn't going to subdivide then the entire rally up from the March 2020 lows is finished. You'd then look for a 38.2% drop to 3750 roughly, or deeper.

My wave count hasn't changed with yesterdays rally up, nor this mornings opening push higher.  We are still missing a wave 4 down of some degree and a wave 5 up afterwards to a new all time high. I'm simply wrong on picking the top and end of this wave 3 up, which is frustrating but I have no FP's on the upside left for clues to guide me, so I must just wait and see. Even the downside FP on the QQQ seems way too deep for me to believe but it would be roughly 2-3% down (if it happens?), so I have to keep it in the back of my mind when we do drop for this wave 4 down. 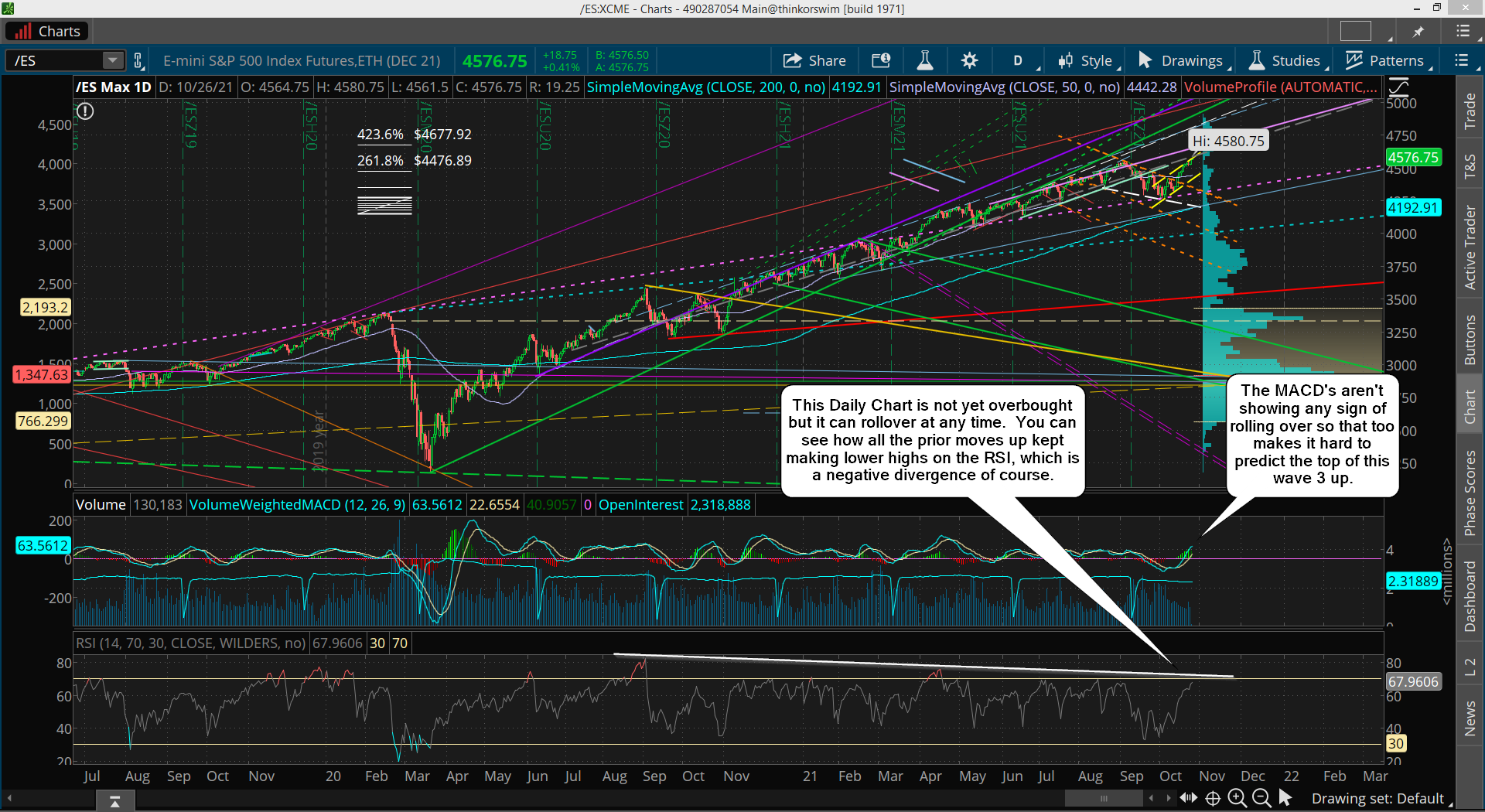 Today needs to carve out some kind of small degree wave 1 down and 2 up into the close I think. That would allow the 3 down to star tomorrow and hit the first support around 4500 by the close. Then afterhours Wednesday break it and drop to the 4442 area, which is the 50 DMA on the Daily chart. Bounce some and then flush out to the 4366 zone by the close this Friday and you have the perfect 2-3% drop to take out all the bulls and get the bears short over the weekend. Then gap up and go next Monday for the wave 5 to 4650-4700 into mid-November. This is what "should" happen but Mr. Market never makes it that easy. Let's watch and see. Have a blessed day.