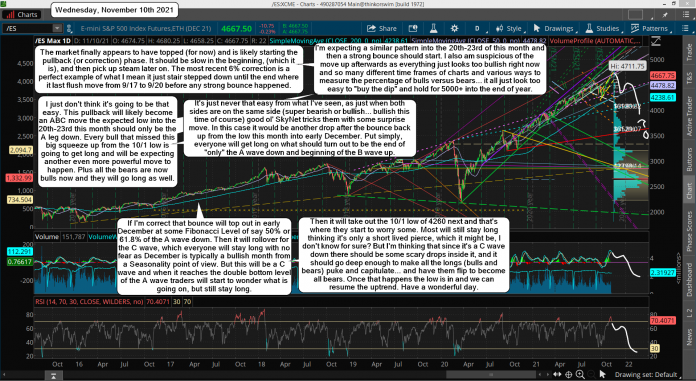 The market finally appears to have topped (for now) and is likely starting the pullback (or correction) phase. It should be slow in the beginning, (which it is), and then pick up steam later on. The most recent 6% correction is a perfect example of what I mean it just stair stepped down until the end where it last flush move from 9/17 to 9/20 before any strong bounce happened.

I'm expecting a similar pattern into the 20th-23rd of this month and then a strong bounce should start. I also am suspicious of the move up afterwards as everything just looks too bullish right now and so many different time frames of charts and various ways to measure the percentage of bulls versus bears... it all just look too easy to "buy the dip" and hold for 5000+ into the end of year.

I just don't think it's going to be that easy. This pullback will likely become an ABC move the expected low into the 20th-23rd this month should only be the A leg down. Every bull that missed this big squeeze up from the 10/1 low is going to get long and will be expecting another even more powerful move to happen. Plus all the bears are now bulls now and they will go long as well.

It's just never that easy from what I've seen, as just when both sides are on the same side (super bearish or bullish... bullish this time of course) good ol' SkyNet tricks them with some surprise move. In this case it would be another drop after the bounce back up from the low this month into early December. Put simply, everyone will get long on what should turn out to be the end of "only" the A wave down and beginning of the B wave up.

If I'm correct that bounce will top out in early December at some Fibonacci Level of say 50% or 61.8% of the A wave down. Then it will rollover for the C wave, which everyone will stay long with no fear as December is typically a bullish month from a Seasonality point of view. But this will be a C wave and when it reaches the double bottom level of the A wave traders will start to wonder what is going on, but still stay long.

Then it will take out the 10/1 low of 4260 next and that's where they start to worry some. Most will still stay long thinking it's only a short lived pierce, which it might be, I don't know for sure? But I'm thinking that since it's a C wave down there should be some scary drops inside it, and it should go deep enough to make all the longs (bulls and bears) puke and capitulate... and have them flip to become all bears. Once that happens the low is in and we can resume the uptrend. Have a wonderful day.