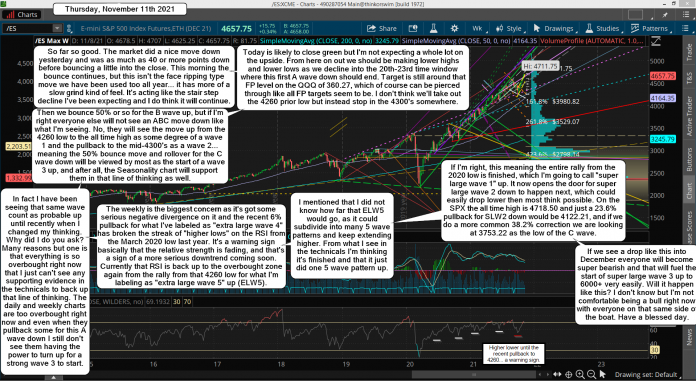 So far so good. The market did a nice move down yesterday and was as much as 40 or more points down before bouncing a little into the close. This morning the bounce continues, but this isn't the face ripping type move we have been used too all year... it has more of a slow grind kind of feel. It's acting like the stair step decline I've been expecting and I do think it will continue.

Today is likely to close green but I'm not expecting a whole lot on the upside. From here on out we should be making lower highs and lower lows as we decline into the 20th-23rd time window where this first A wave down should end. Target is still around that FP level on the QQQ of 360.27, which of course can be pierced through like all FP targets seem to be. I don't think we'll take out the 4260 prior low but instead stop in the 4300's somewhere.

Then we bounce 50% or so for the B wave up, but if I'm right everyone else will not see an ABC move down like what I'm seeing. No, they will see the move up from the 4260 low to the all time high as some degree of a wave 1 and the pullback to the mid-4300's as a wave 2... meaning the 50% bounce move and rollover for the C wave down will be viewed by most as the start of a wave 3 up, and after all, the Seasonality chart will support them in that line of thinking as well.

In fact I have been seeing that same wave count as probable up until recently when I changed my thinking. Why did I do you ask? Many reasons but one is that everything is so overbought right now that I just can't see any supporting evidence in the technicals to back up that line of thinking. The daily and weekly charts are too overbought right now and even when they pullback some for this A wave down I still don't see them having the power to turn up for a strong wave 3 to start.

The weekly is the biggest concern as it's got some serious negative divergence on it and the recent 6% pullback for what I've labeled as "extra large wave 4" has broken the streak of "higher lows" on the RSI from the March 2020 low last year. It's a warning sign basically that the relative strength is fading, and that's a sign of a more serious downtrend coming soon. Currently that RSI is back up to the overbought zone again from the rally from that 4260 low for what I'm labeling as "extra large wave 5" up (ELW5).

I mentioned that I did not know how far that ELW5 would go, as it could subdivide into many 5 wave patterns and keep extending higher. From what I see in the technicals I'm thinking it's finished and that it just did one 5 wave pattern up.

If we see a drop like this into December everyone will become super bearish and that will fuel the start of super large wave 3 up to 6000+ very easily. Will it happen like this? I don't know but I'm not comfortable being a bull right now with everyone on that same side of the boat. Have a blessed day.