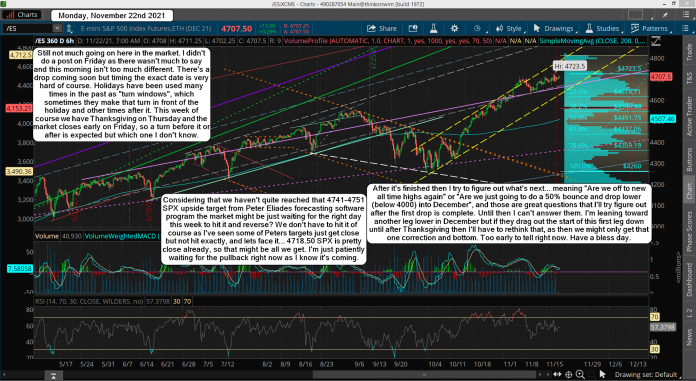 Still not much going on here in the market. I didn't do a post on Friday as there wasn't much to say and this morning isn't too much different. There's a drop coming soon but timing the exact date is very hard of course. Holidays have been used many times in the past as "turn windows", which sometimes they make that turn in front of the holiday and other times after it. This week of course we have Thanksgiving on Thursday and the market closes early on Friday, so a turn before it or after is expected but which one I don't know.

Considering that we haven't quite reached that 4741-4751 SPX upside target from Peter Eliades forecasting software program the market might be just waiting for the right day this week to hit it and reverse? We don't have to hit it of course as I've seen some of Peters targets just get close but not hit exactly, and lets face it... 4718.50 SPX is pretty close already, so that might be all we get. I'm just patiently waiting for the pullback right now as I know it's coming.

After it's finished then I try to figure out what's next... meaning "Are we off to new all time highs again" or "Are we just going to do a 50% bounce and drop lower (below 4000) into December", and those are great questions that I'll try figure out after the first drop is complete. Until then I can't answer them. I'm leaning toward another leg lower in December but if they drag out the start of this first leg down until after Thanksgiving then I'll have to rethink that, as then we might only get that one correction and bottom. Too early to tell right now. Have a bless day.