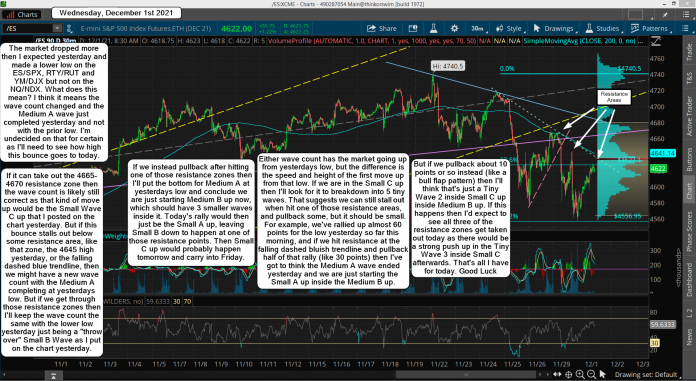 The market dropped more then I expected yesterday and made a lower low on the ES/SPX, RTY/RUT and YM/DJX but not on the NQ/NDX. What does this mean? I think it means the wave count changed and the Medium A wave just completed yesterday and not with the prior low. I'm undecided on that for certain as I'll need to see how high this bounce goes to today.

If it can take out the 4665-4670 resistance zone then the wave count is likely still correct as that kind of move up would be the Small Wave C up that I posted on the chart yesterday. But if this bounce stalls out below some resistance area, like that zone, the 4645 high yesterday, or the falling dashed blue trendline, then we might have a new wave count with the Medium A completing at yesterdays low. But if we get through those resistance zones then I'll keep the wave count the same with the lower low yesterday just being a "throw over" Small B Wave as I put on the chart yesterday.

If we instead pullback after hitting one of those resistance zones then I'll put the bottom for Medium A at yesterdays low and conclude we are just starting Medium B up now, which should have 3 smaller waves inside it. Today's rally would then just be the Small A up, leaving Small B down to happen at one of those resistance points. Then Small C up would probably happen tomorrow and carry into Friday.

Either wave count has the market going up from yesterdays low, but the difference is the speed and height of the first move up from that low. If we are in the Small C up then I'll look for it to breakdown into 5 tiny waves. That suggests we can still stall out when hit one of those resistance areas, and pullback some, but it should be small. For example, we've rallied up almost 60 points for the low yesterday so far this morning, and if we hit resistance at the falling dashed bluish trendline and pullback half of that rally (like 30 points) then I've got to think the Medium A wave ended yesterday and we are just starting the Small A up inside the Medium B up.

But if we pullback about 10 points or so instead (like a bull flap pattern) then I'll think that's just a Tiny Wave 2 inside Small C up inside Medium B up. If this happens then I'd expect to see all three of the resistance zones get taken out today as there would be a strong push up in the Tiny Wave 3 inside Small C afterwards. That's all I have for today. Good Luck