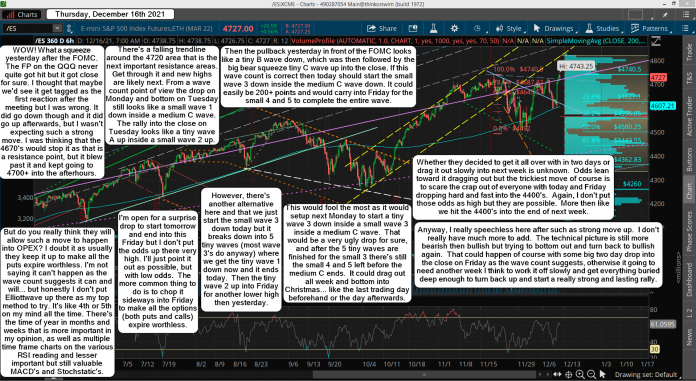 WOW! What a squeeze yesterday after the FOMC. The FP on the QQQ never quite got hit but it got close for sure. I thought that maybe we'd see it get tagged as the first reaction after the meeting but I was wrong. It did go down though and it did go up afterwards, but I wasn't expecting such a strong move. I was thinking that the 4670's would stop it as that is a resistance point, but it blew past it and kept going to 4700+ into the afterhours.

There's a falling trendline around the 4720 area that is the next important resistance areas. Get through it and new highs are likely next. From a wave count point of view the drop on Monday and bottom on Tuesday still looks like a small wave 1 down inside a medium C wave. The rally into the close on Tuesday looks like a tiny wave A up inside a small wave 2 up.

Then the pullback yesterday in front of the FOMC looks like a tiny B wave down, which was then followed by the big bear squeeze tiny C wave up into the close. If this wave count is correct then today should start the small wave 3 down inside the medium C wave down. It could easily be 200+ points and would carry into Friday for the small 4 and 5 to complete the entire wave.

But do you really think they will allow such a move to happen into OPEX? I doubt it as usually they keep it up to make all the puts expire worthless. I'm not saying it can't happen as the wave count suggests it can and will... but honestly I don't put Elliottwave up there as my top method to try. It's like 4th or 5th on my mind all the time. There's the time of year in months and weeks that is more important in my opinion, as well as multiple time frame charts on the various RSI reading and lesser important but still valuable MACD's and Stochstatic's.

I'm open for a surprise drop to start tomorrow and end into this Friday but I don't put the odds up there very high. I'll just point it out as possible, but with low odds.  The more common thing to do is to chop it sideways into Friday to make all the options (both puts and calls) expire worthless. 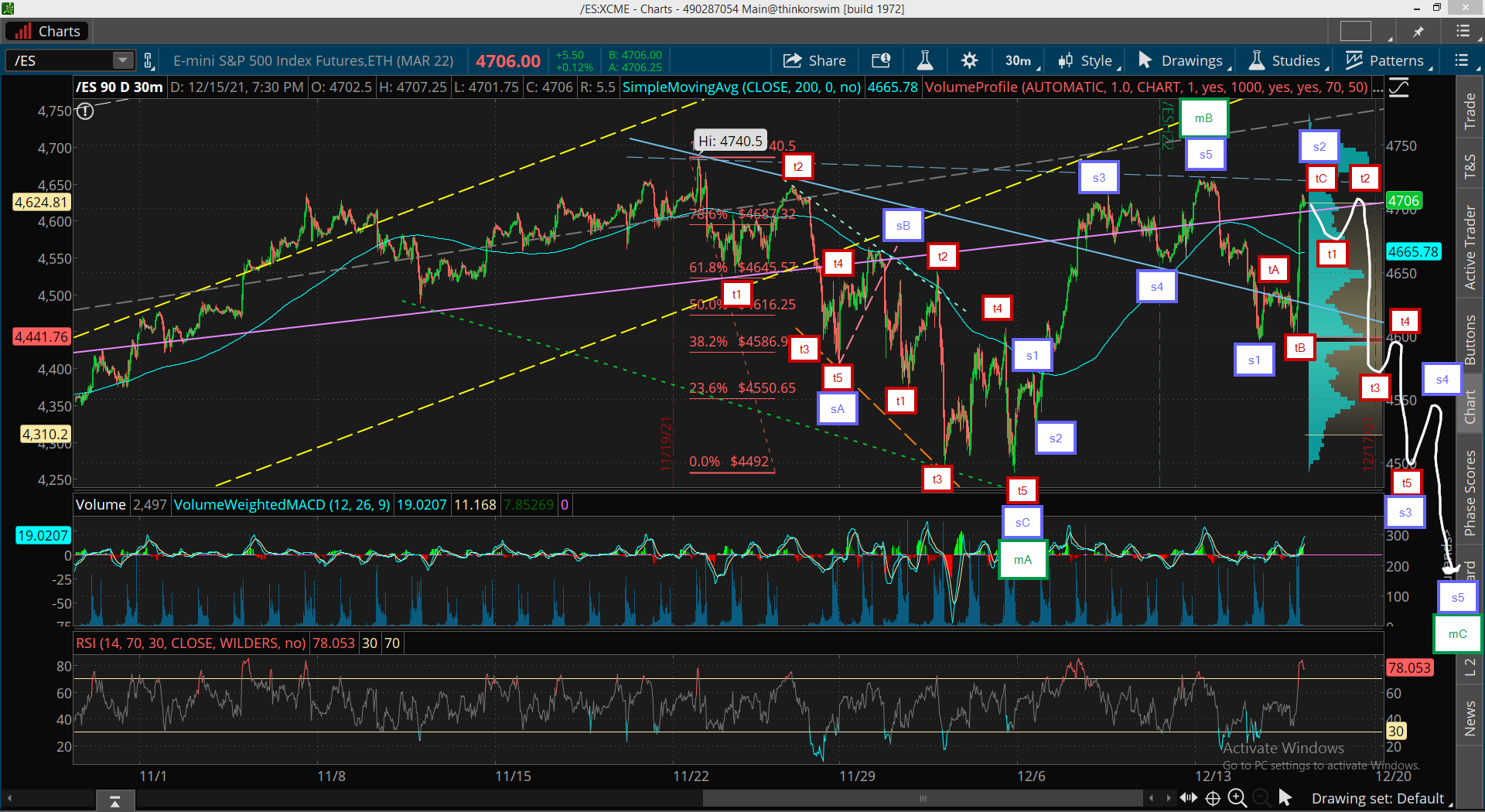 However, there's another alternative here and that we just start the small wave 3 down today but it breaks down into 5 tiny waves (most wave 3's do anyway) where we get the tiny wave 1 down now and it ends today.  Then the tiny wave 2 up into Friday for another lower high then yesterday.

This would fool the most as it would setup next Monday to start a tiny wave 3 down inside a small wave 3 inside a medium C wave.  That would be a very ugly drop for sure, and after the 5 tiny waves are finished for the small 3 there's still the small 4 and 5 left before the medium C ends.  It could drag out all week and bottom into Christmas... like the last trading day beforehand or the day afterwards.

Anyway, I really speechless here after such as strong move up.  I don't really have much more to add.  The technical picture is still more bearish then bullish but trying to bottom out and turn back to bullish again.  That could happen of course with some big two day drop into the close on Friday as the wave count suggests, otherwise it going to need another week I think to work it off slowly and get everything buried deep enough to turn back up and start a really strong and lasting rally.

Whether they decided to get it all over with in two days or drag it out slowly into next week is unknown.  Odds lean toward it dragging out but the trickiest move of course is to scare the crap out of everyone with today and Friday dropping hard and fast into the 4400's.  Again, I don't put those odds as high but they are possible.  More then like we hit the 4400's into the end of next week.

NOTE:  Even though I did that screenshot yesterday this new high on the ES futures doesn't change a thing as the Nasdaq and DOW haven't made one in the futures and don't look like they are going to do one.  Plus the cash open for all of them should still be below the all time high.