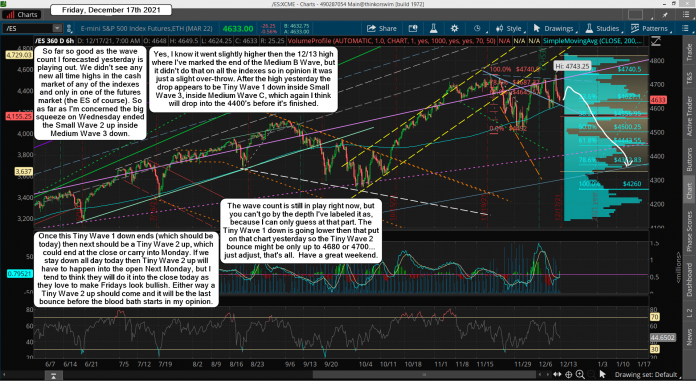 So far so good as the wave count I forecasted yesterday is playing out. We didn't see any new all time highs in the cash market of any of the indexes and only in one of the futures market (the ES of course). So as far as I'm concerned the big squeeze on Wednesday ended the Small Wave 2 up inside Medium Wave 3 down.

Yes, I know it went slightly higher then the 12/13 high where I've marked the end of the Medium B Wave, but it didn't do that on all the indexes so in opinion it was just a slight over-throw. After the high yesterday the drop appears to be Tiny Wave 1 down inside Small Wave 3, inside Medium Wave C, which again I think will drop into the 4400's before it's finished.

Once this Tiny Wave 1 down ends (which should be today) then next should be a Tiny Wave 2 up, which could end at the close or carry into Monday. If we stay down all day today then Tiny Wave 2 up will have to happen into the open Next Monday, but I tend to think they will do it into the close today as they love to make Fridays look bullish. Either way a Tiny Wave 2 up should come and it will be the last bounce before the blood bath starts in my opinion.

The wave count is still in play right now, but you can't go by the depth I've labeled it as, because I can only guess at that part. The Tiny Wave 1 down is going lower then that put on that chart yesterday so the Tiny Wave 2 bounce might be only up to 4680 or 4700... just adjust, that's all.  Have a great weekend.